HBO's sci-fi drama "Westworld" continued its third season premiere on Sunday night with episode two, "The Winter Line." From a tricky aspect-ratio-change to the meta "Jurassic Park" reference tucked into that "Game of Thrones" crossover scene, we're here to take a closer look at the smaller things you might have overlooked in the episode.

The episode opens right where the post-credits scene from the last week left off: Maeve is in War World. 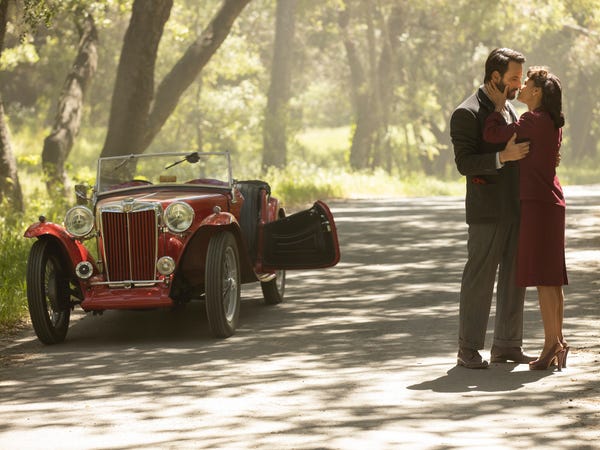 As we noted last week, fans uncovered a Delos Destinations website for War World that helped confirm the park's name well before this episode aired.

What's interesting is that we still haven't technically seen the real War World. Is this exactly how it looks in the actual Delos park? Or was this a new narrative created for the simulation?

This episode's title, "The Winter Line," helps orient you even more precisely in the time period being recreated for War World. 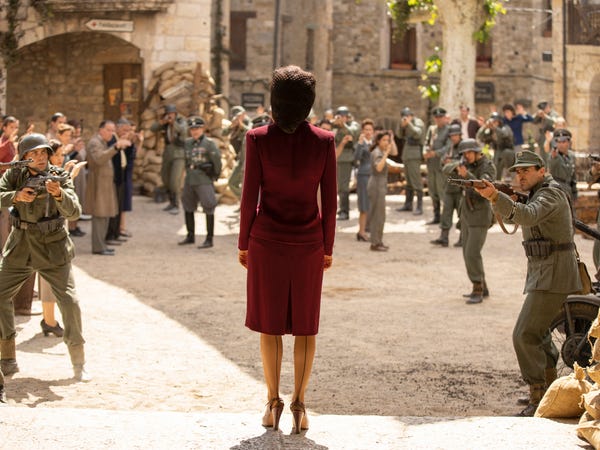 The Winter Line was the name for a series of defensive military areas built by the Germans and Italians during World War II. While the narrative of this particular park does involved Nazis, it's notably not called "Nazi World."

We'll get to the reveal that this is all a simulation in a bit, but for now let's look at the details of this particular park — starting with Maeve's new name. 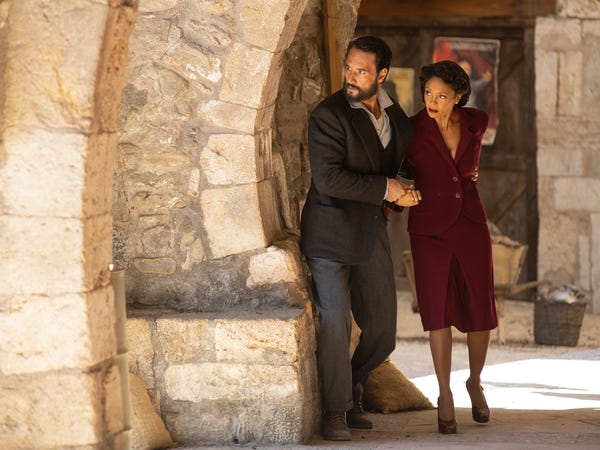 Maeve is called "Isabella" inside the narrative built for her and Hector (while he's called Ettore, the Italian version of Hector).

Isabella is the name of Hector's lost love scripted for his Westworld park narrative.

In season two, Lee expressed outrage at the way Hector and Maeve were showing romantic feelings for each other, since Hector was programmed to only have feelings for "Isabella." 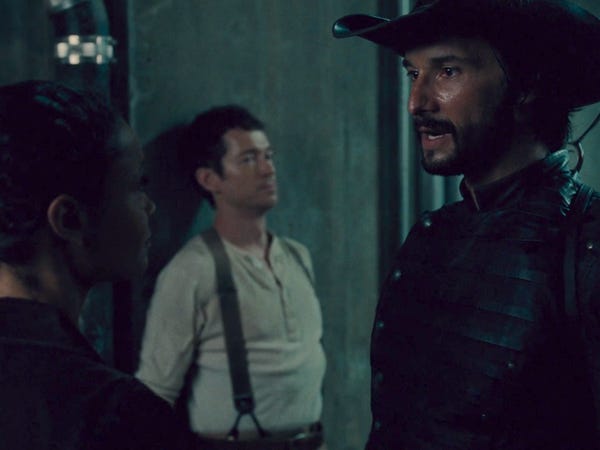 "You're f—— programmed to have no love beyond Isabella," Sizemore told Hector in season two, episode three. "Isabella is written into the godd— laws of your being."

"No laws bind me," Hector said. "When I awoke in the place where you play God, I realized Isabella was a lie. Just words in my head."

Remembering that exchange adds a little extra sting to the revelation that the Hector we're watching in season three doesn't actually exist in real life, let alone remember who Maeve is and his feelings for her.

It's also worth remembering that Isabella is based on Lee's ex-girlfriend who dumped him. So he "wrote her into a narrative and killed her off," as Maeve put it last season.

Maeve eventually realizes that Felix and Sylvester didn't recognize her because they were in a simulation — but does that mean no one knows those two techs were helping her? 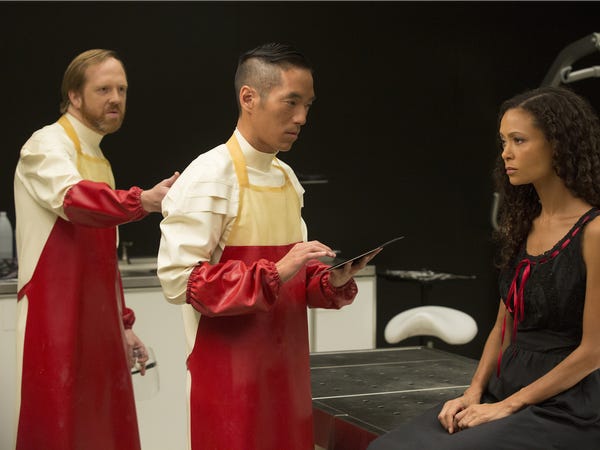 Could we still see the real Felix and Sylvester at some point again down the line? And for that matter, what about Hector or the other hosts who were helping Maeve?

When Maeve realizes she and Lee are in a simulation, the aspect ratio changes so the audience can track what's real and what's not. 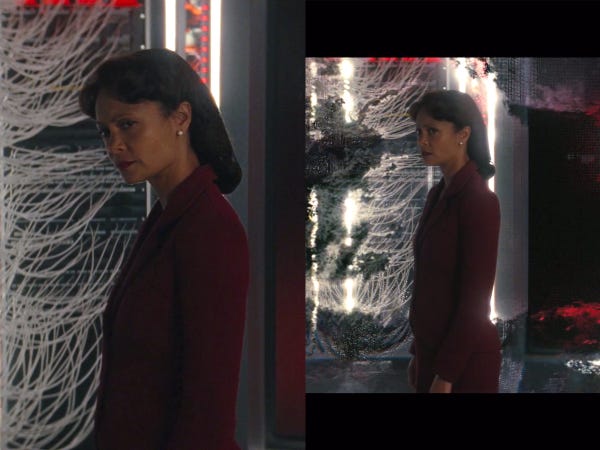 Depending on what type of device you watch "Westworld" on, you might not have realized the aspect ratio changed.

"We talked about that aspect-ratio change for a long time and how important it was to signal the truth about where Maeve was and how she was actually in a simulation," Lisa Joy told Insider in an interview. "We wanted the camera move to mirror and bring that realization to life."

The camera moves forward towards Lee as the aspect ratio changes, causing little black bars to appear at the top and bottom of the screen. A similar effect was used last season to indicate when hosts were inside the Cradle.

"We thought it would be fun to use the dolly to do the aspect ratio change, which I have not quite seen before," Nolan said. "We wanted to subtly touch on the idea of the distinction between reality and virtual reality in a show that is already pretty damn complicated. Trying to give one concrete visual reminder of where you are in the hierarchy of things."

In case you need a refresher, the Forge is where all those decades' worth of park visitor data was held. 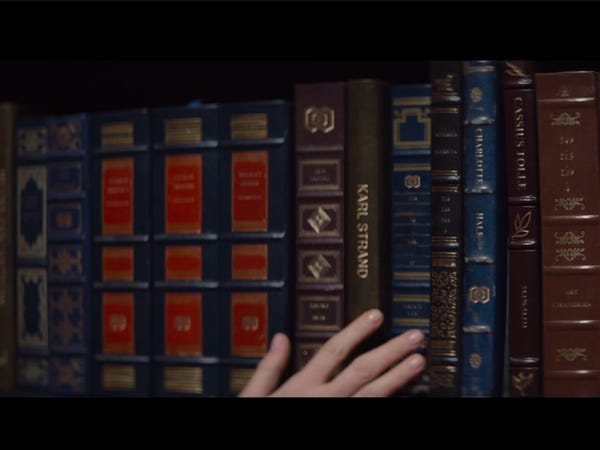 The Forge was a secret project only a few people at Delos knew about (including Ford, Charlotte Hale, and William). At the end of season two, Dolores and Bernard went to the Forge and explored the data held there.

That's how Dolores has known so much about real people out in Los Angeles and other cities — she "read" their data files in the Forge. That's what Bernard is recounting later during his talk with Stubbs.

At the end of season two, Dolores sent the Forge data to a secret satellite location. 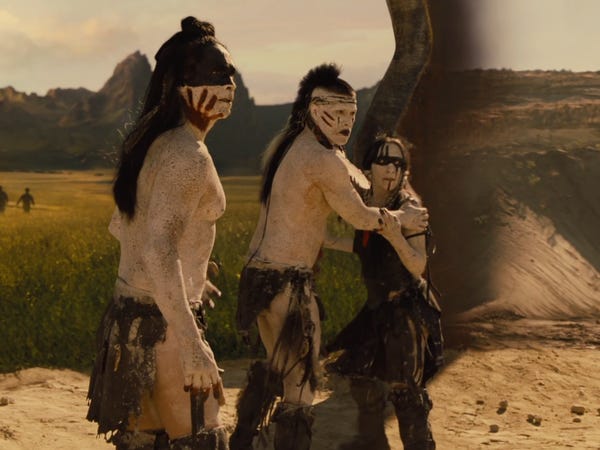 Dolores combined the regular Forge data (which has the human guest data) with the other secret virtual world called the Valley Beyond. That's the paradise-looking place where Teddy, Akecheta, Maeve's daughter, and other hosts were all transferred to at the end of season two.

Serac was using a simulation to try and get Maeve to reveal the location of that data. But she doesn't know where it is — only Dolores does.

So is Serac just after the Forge data? Or does he want to tempt Dolores out in the open by threatening the hosts now inside the Forge?

This episode confirms in-universe that Stubbs is a host — a reveal mostly given to us in the season two finale. 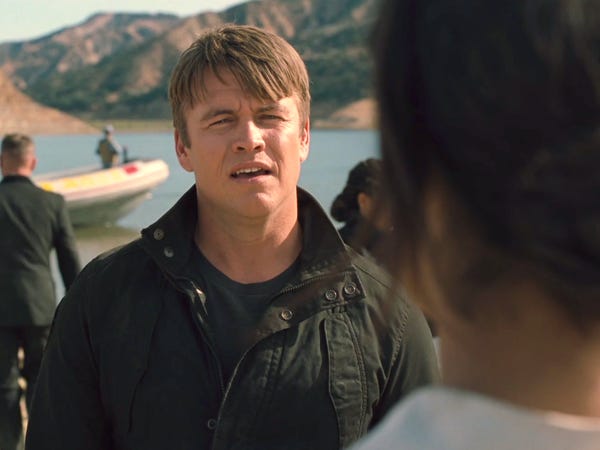 The "Westworld" season two finale contained many confounding revelations, but the most mysterious of these might have been when Stubbs hinted that he was a host.

The episode's director, Fred Toye, confirmed this robot revelation to Vanity Fair's Joanna Robinson on the "Still Watching: Westworld" podcast back in 2018.

"There'd been hints along the way," Hemsworth said in an interview with Insider ahead of the season three premiere.

Read our full interview with Luke Hemsworth here, in which he describes "hassling" cocreator Jonathan Nolan for years about whether Stubbs was a host or a human.

Bernard fixed up Stubbs with one of his own body-copy's C6 vertebrae so that Stubbs could safely leave the park. 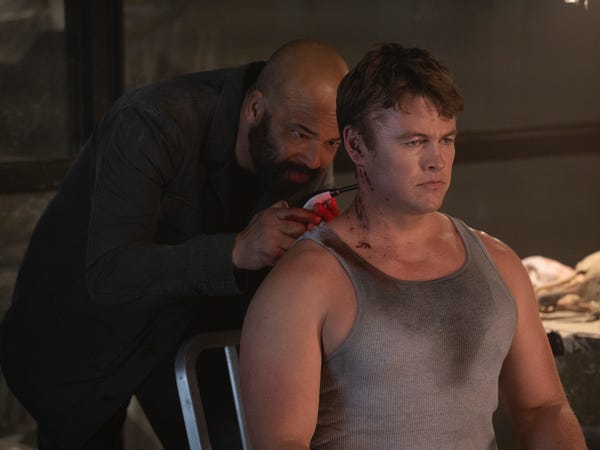 As explained in the first season of "Westworld," all the hosts were built with an explosive device planted in their spine (the C6 vertebrae, to be precise) that would detonate if they ever tried to leave the park borders.

Bernard didn't have one, since Ford built him to pass off as human. But it's interesting that Ford would have built Stubbs with one of the C6 devices, since Stubbs was also built by Ford and disguised as a human.

With the introduction of "park four" (which we're calling Fantasy World, but more on that soon), there's just one mystery park left. 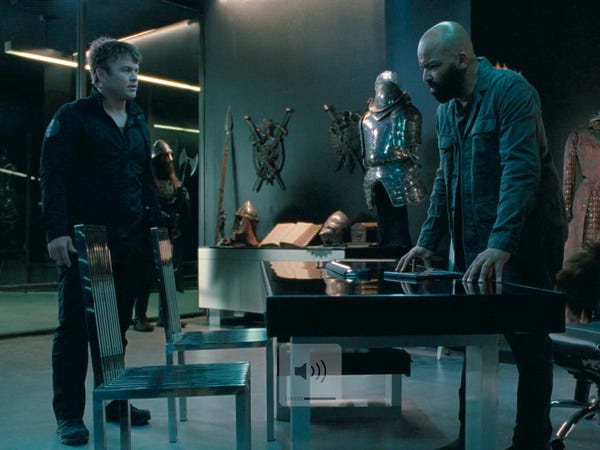 So now we know the following:

We asked Nolan and Joy if park four was either "Fantasy World" or "Medieval World" (since they said in 2016 that Medieval World wasn't part of the TV show's universe). 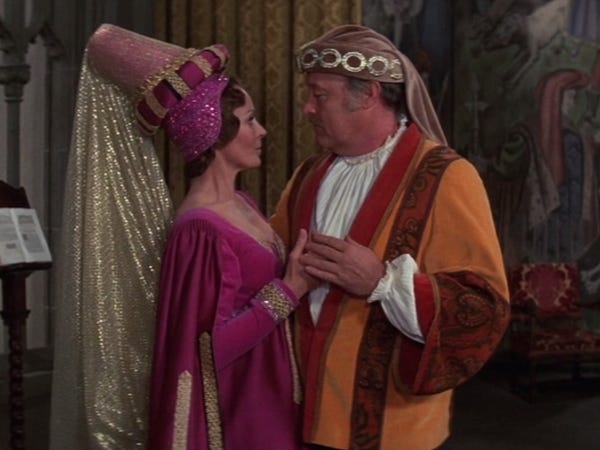 "I think that is subject to some speculation," Nolan told Insider. "We are, we are neither going to confirm or deny it, hence 'park four.'"

But back in 2016, at a New York Comic Con panel, Nolan said we wouldn't see Medieval World within the HBO adaptation. So did they change their minds? Or is park four called something else?

Read our full breakdown of the possibilities (and exactly what Nolan and Joy said in the past) here.

The cameo from "Game of Thrones" showrunners David Benioff and D.B. Weiss was clear enough, but you might not have caught the "Jurassic Park" reference. 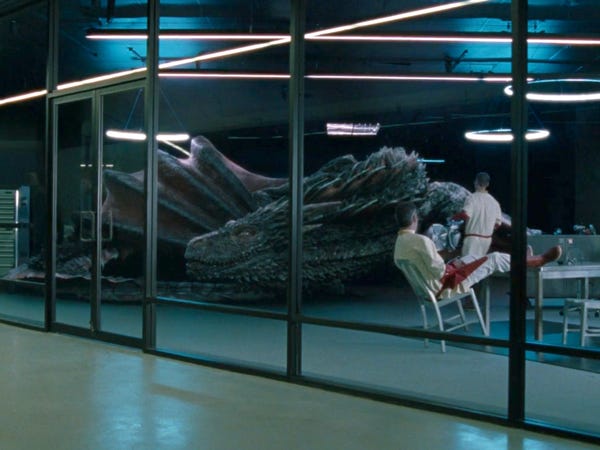 The tech played by Weiss says he has a buyer in Costa Rica. In "Jurassic Park," the fictional island Isla Nublar is located off the coast of Costa Rica.

As Nolan and Joy told Insider, they wanted to pay tribute to "Jurassic Park" since Michael Crichton wrote both the original 1973 "Westworld" movie and the iconic "Jurassic Park" novels.

"I was of the theory that the lovely people at NBC Universal probably had a lawyer sitting and watching every episode, waiting for the dinosaur, so they could make a friendly phone call to tell us to cease and desist," Nolan said. "So we found a way to blend those two pitches into one ridiculous moment in our series."

Read more about their choice to have a "Game of Thrones"/"Jurassic Park" reference in our interview here.

The scene where Stubbs rights with other Delos security was rewritten because, in real life, actor Luke Hemsworth had "snapped [his] bicep off the bone" while hanging up a TV. 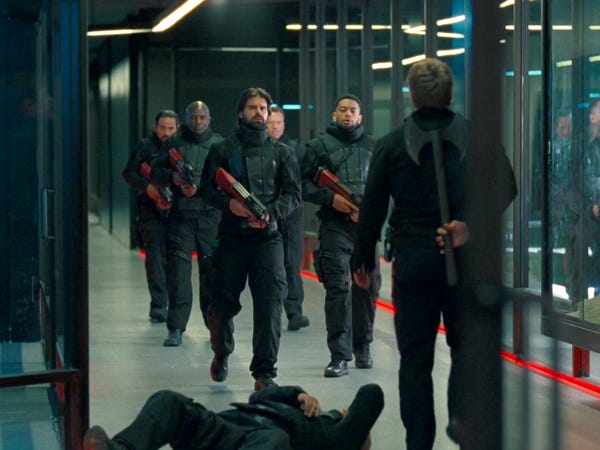 "I actually snapped my bicep off the bone two days before that," Hemsworth told Insider. "So when [Stubbs] gets shot in the arm, that was something we had to do because I couldn't move my arm properly."

Hemsworth says he was hanging up a "really big" TV by himself, and was bouncing it to try and get it up onto brackets when his whole muscle snapped. You can read the whole story for yourself in our interview here.

The mysterious "Serac" was revealed to be the man who took Maeve's control unit from the park. 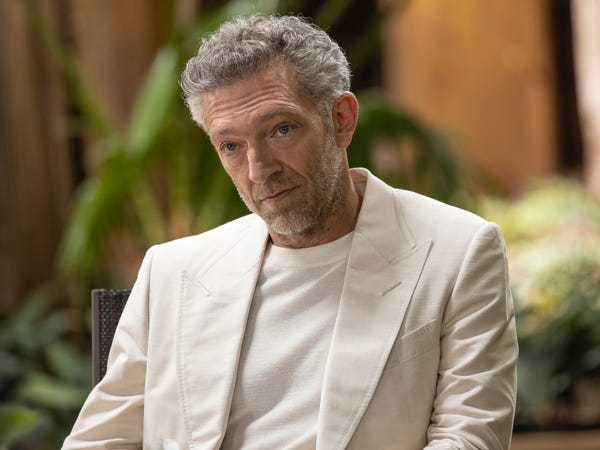 At the end of last week's episode, we saw Dolores tormenting the Incite head of security (Connells) until he told her who controlled the Rehoboam system: Someone named "Serac."

When Maeve wakes up, this time in the real world, she finds herself face-to-face with a man who says his name is Enguerrand Serac (played by Vincent Cassel).

Tying neatly to the episode's "park four" revelation, Enguerrand is name that originated in medieval France.

Fans Think That Jennifer Lopez Is Going to Elope