After revealing that she’s exposed to the deadly virus just days before she’s eligible for her booster, the ‘Mean Girls’ actress says that she’s trying her ‘very best’ to ‘adjust to the reality’ of her ‘barn holiday.’

AceShowbiz –Amanda Seyfried spent her Christmas holiday in isolation with her daughter Nina Sadoski. The actress portraying Sophie in “Mamma Mia!” revealed that being separated from her family during the special moment after COVID-19 exposure was “f**king hard.”

The 36-year-old actress took to her Instagram account on Christmas to post a boomerang video that saw her children sharing a hug. Over the sweet clip, she wrote, “It kills me that my girl and I are separated from her dad and brother this Christmas.”

“It’s a s**t time to be in isolation and it’s happening everywhere,” Amanda continued. The “Mean Girls” star also said that she was trying her “very, very best to find the beauty, adjust to the reality and make incredible memories” of her “barn holiday” with her 4-year-old daughter as they’re quarantining together. “But it’s f**king hard. And that’s OK too,” she added. “Happy Christmas Eve to all. Hold the people you can hold tighter, even.”

In the comment section, Amanda’s famous friends showed some support. Emmy Rossum left a slew of red heart emojis, while Jenna Dewan wrote, “Awwww sending you guys so much love.”

Explaining further, Amanda wrote via Instagram Story that she was exposed to COVID-19 “three days before [she] was eligible for her booster.” She added, “I’m left wondering if the six-month rule between shots still holds the same weight. If I’d been able to get my booster sooner, maybe I would have dodged the virus. Maybe. Should that rule still apply?” 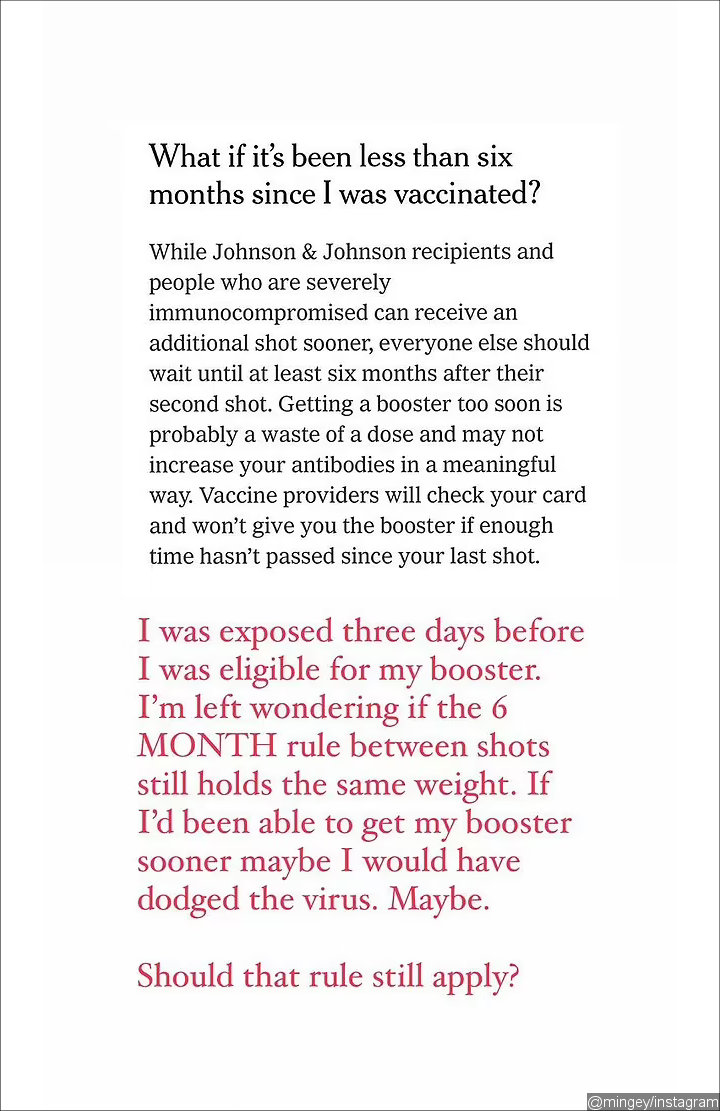 Amanda Seyfried explained that she’s exposed to the coronavirus just days before she’s eligible for her vaccine booster.

Amanda herself battled a “tough case of COVID” in January, when she received her first Oscar nomination for “Mank“, although she didn’t reveal her health issue until she appeared on “Late Night With Seth Meyers” nine months later.

“I turned my phone off the night before because I was like, ‘If anyone’s going to tell me I got an Academy Award nomination or didn’t, I want it to be my mother,’ ” Amanda said during the talk show in October. “But I was also sleeping in because I had a tough case of COVID.”

Amanda admitted that she didn’t tell anyone about testing positive for coronavirus because she didn’t want it to overshadow her career win. The “Jennifer’s Body” actress, who had been vaccinated days before her positive test, added, “I didn’t want that to take over because clickbait and stuff like that. It’s great to have both, apparently. Hybrid immunity.”

Slow broadband? Why upgrading your download speeds will unlock £120 to spend on Amazon

Does Facebook Really Know How Many Fake Accounts It Has?