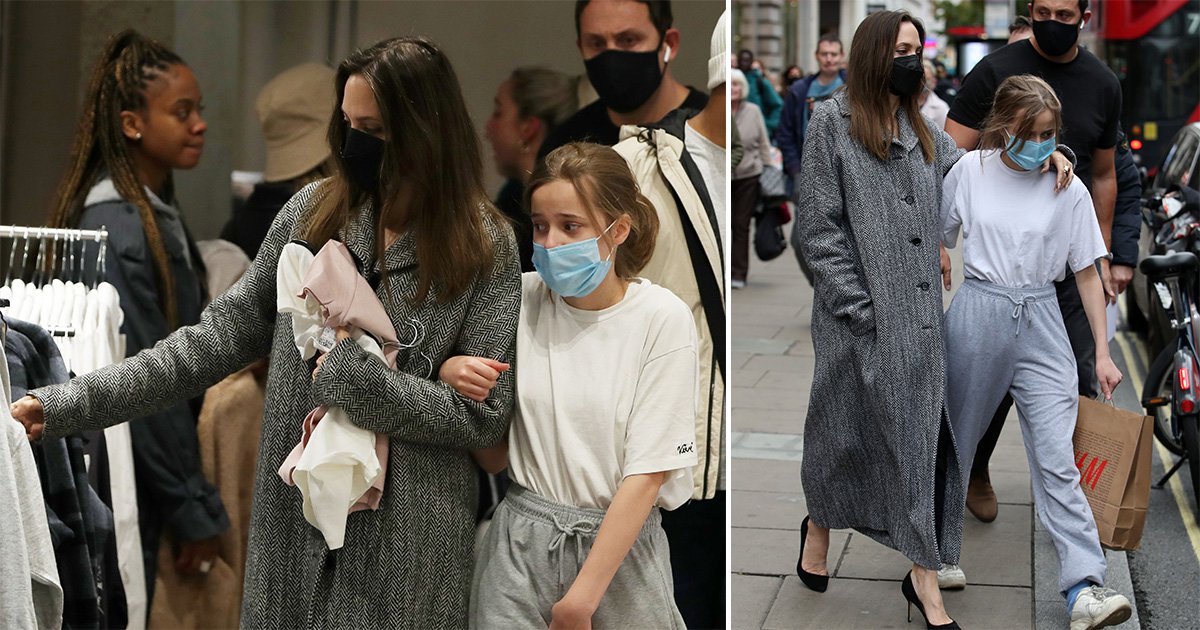 Angelina Jolie left shoppers stunned this week as she headed on a casual shopping trip with her daughter Vivienne on Oxford Street in London.

The Hollywood star, 46, is in the UK to coincide with the premiere of Marvel’s The Eternals, but made sure to enjoy some retail therapy while she is here, too.

Angelina was seen heading to H&M with daughter Vivienne Jolie-Pitt, 13, where they were seen browsing the racks, before picking up some white and neutral tops.

Vivienne kept it casual for the outing in a white tee, grey jogging bottoms and trainers as she clung on tight to her mum’s arm amid the crowd of people.

Angelina meanwhile was seen wearing a long grey coat and black heels, with both mother and daughter wearing face masks to protect amid the ongoing coronavirus pandemic.

The shopping trip appeared to go well as Vivienne was seen carrying a brown paper bag of their purchases as they left the store.

Vivienne was the only one of Angelina’s six children who was spotted on the shopping trip but she also has adopted sons Maddox, 20, and Pax, 17, adopted daughter Zahara, 16, Shiloh, 15, and twins Knox and Vivienne from her former marriage to Brad Pitt, 57.

All of her children except Pax had attended the recent US premiere for The Eternals, where Zahara wore Angelina’s 2014 Oscars dress on the red carpet.

Angelina and Vivienne had arrived in to London from Italy as the promotional tour for the latest Marvel film continues, with the UK premiere taking place this week.

The Eternals has already caused a stir after confirming that Harry Styles is joining the MCU as Thanos’s brother Eros in the post-credits scene.

The film is based on a fictional immortal alien race, The Eternals, who come out of the hiding they have been in for thousands of years to protect Earth from their evil counterparts, the Deviants.

Angelina stars as elite warrior Thena, and recently praised the diversity in the cast, telling Variety: ‘What’s really quite stunning is that when we walked out all of us together, it didn’t feel like: “This is so new and cool,” it felt like: “This is how it always should have been.” Why did it take so long? It felt so right.’

She added: ‘What I hope is that when people watch this film, they’re not seeing it and saying: “Oh, this is a film about diversity. This is a film that shows this person can be a superhero.”

The Eternals will be released in cinemas on November 5.

Boris Johnson told to apologise for late declaration of earnings