Home » Celebrities » April The Giraffe Has Sadly Died At 20 & Fans Are In Mourning: ‘Best Giraffe Pal Out There’

April the Giraffe,  who broke the internet in 2017 during her pregnancy, has sadly passed away at the age of 20 after struggling with arthritis since July 2020.

Animal Adventure Park in Harpursville, NY, lost a beloved member of its animal kingdom on April 2. April the Giraffe, who broke the internet in 2017 during her months-long pregnancy that was live-streamed to the world, sadly died at the age of 20 years old, per the Animal Adventure Park official Facebook page. April was euthanatized following her battle with worsening arthritis.

“It is with the heaviest of hearts that Animal Adventure Park announces the tremendous loss of our beloved April the Giraffe,” the statement read. “Euthanasia was carried out at April’s home in Harpursville this morning, due to her worsening arthritis, in accordance with the recommendations of her veterinary team. We grieve with her many fans, near and far, as we say goodbye to the giraffe that can be credited with making a foothold for giraffe and giraffe conservation awareness in the 21st century.” 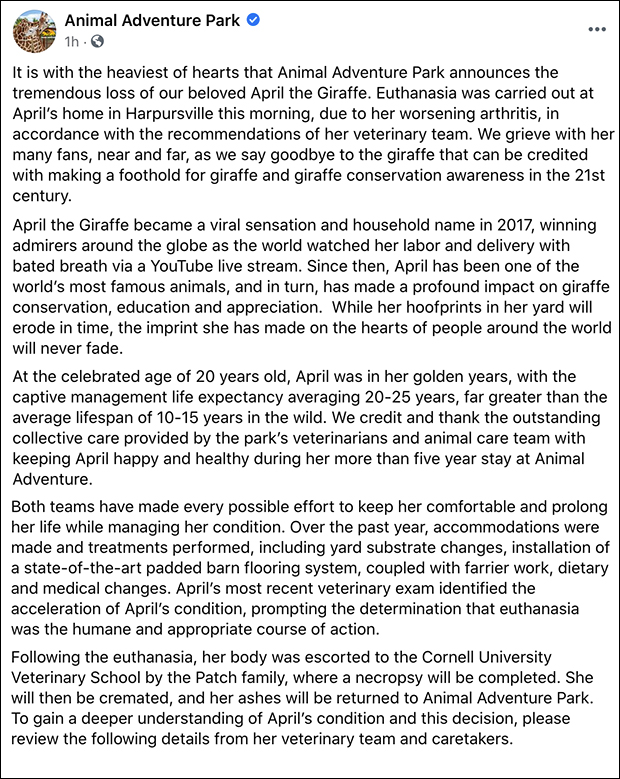 The environmental conservation organization also shared April’s legacy in their moving statement. “April the Giraffe became a viral sensation and household name in 2017, winning admirers around the globe as the world watched her labor and delivery with bated breath via a YouTube live stream. Since then, April has been one of the world’s most famous animals, and in turn, has made a profound impact on giraffe conservation, education and appreciation,” the statement read. “While her hoofprints in her yard will erode in time, the imprint she has made on the hearts of people around the world will never fade.”

All over Twitter, journalists and Animal Adventure Park-goers remembered the beautiful animal. “Rest in peace to April, the best giraffe pal out there,” journalist Dylan Kuhn of FOX 40 News WICZ TV, wrote on Twitter. Along with his mournful message, Dylan also added a video of his younger self with April. While Dylan addressed viewers in the video, April sweetly nuzzled Dylan, who beamed throughout their adorable interaction.

More fans took to Twitter to share how heartbroken they were in the comment section to media posts sharing the devastating news online. April gave birth to her fifth calf on March 16, 2019. She became pregnant with her fifth calf roughly 15 months after giving birth to her fourth. Fans watched with immense focus as they waited to see April welcome another little one into the world. Their thoughts are undoubtedly with the Animal Adventure Park personnel and April’s longtime team during this difficult time.