Home » Celebrities » Brooke Shields is trying to cook in isolation after not bothering before, same

Embed from Getty Images
Some of my favorite stories to cover before all this were the “day in the life” interviews from celebrities. Vanity Fair had some great video interviews, and so did NY Mag’s The Cut with their “How I Get it Done” series. Now that we’re all stuck at home, that’s not as interesting to me. I want to read about Anthony Mackie getting day drunk at the same New Orleans dive bar every Friday night and falling asleep early to Golden Girls, I don’t want to know how yet another celebrity is “coping” having to stay at home. Give me some escapism! I’m salty about them complaining, but Brooke Shields doesn’t elicit that response in me. She admitted to US Magazine that she can’t really cook but is taking a stab at it. She also shared some photos where she’s bleaching sh-t, organizing her closet, composting and playing Bananagrams. It’s all quite relatable.

Brooke Shields… has been organizing areas in her home. “[It’s] one of my favorite things to do,” she explains exclusively in the new issue of Us Weekly.

According to one of Shields’ Instagram posts, she’s even taken a stab at working in her kitchen. “I’m not known for my cooking. I’m not known for my recipes. I don’t come from a family of chefs. I didn’t grow up with food on the stove and a house smelling like something delicious,” the Blue Lagoon star said in a March 25 video. “But I’ve decided to try to make some of my own [tomato] sauce … I’m attempting a meal, [and] already made some mistakes.”

Despite being stuck inside, [Shields] is making sure she doesn’t just wear loungewear all day. On April 5, Shields glammed herself up for a Met Gala themed family dinner.

But one thing that has stayed consistent in her schedule? Working out. [Shields] ensures she stays fit by doing creative daily exercises. On one day, she tells Us, she improvised an inner thighs workout using a porch planter and a band.

Shields has also been using an Indo Board to work on her balance. “It’s important to stay healthy,” she shared in an Instagram video posted on March 26.

Finally, by the end of the day, all Shields wants to do is relax — and she is doing just that be taking on a big puzzle, she notes. “They calm me.”

The end of the day calls for a round of Bananagrams! “I love games and hate losing,” she admits.

In Brooke’s most recent Instagram story she got really excited about finding an onion chopper in the basement. She shared a pic of the food she made, which looked like ratatouile and pan seared fish. I should make ratatouile! I used to make it all the time when I was married.

I’m cooking more too and it’s taking up so much time. I’m getting better at it though and am aiming for five dinners a week. I used to consider it ambitious to cook twice a week. I’ve also baked twice now! You’ve probably heard me brag about my banana bread and I made carrot cake muffins with legit homemade icing for Easter! They turned out great.

One thing Brooke didn’t mention is her kids. She and her husband, Chris Henchy, have daughters Rowan, 16, and Grier, 13. I wonder how that’s going with everyone quarantined together. I do! As for Brooke’s competitive nature at games, I have a 15-year-old at home and he has been consistently beating me at a logic board game called Santorini. The only thing I can beat him at are word games.

Brooke has been sharing her workouts improvised with at-home stuff like towels instead of slider discs (I have those at home actually), a milk bottle as a weight and a speaker as a heavy weight for a deadlift. She also uses workout bands a lot. I have those and never use them so I should followe her instructions. You can do body weight exercises too but that’s cool that she’s showing how she makes due. I bet her teenagers are bugging the crap out of her and she’s trying to focus on her own stuff.

Everybody finds comfort in the arms of the person who keeps you safe. Stay HOME.

Everybody finds comfort in the arms of the person who keeps you safe. Stay HOME. 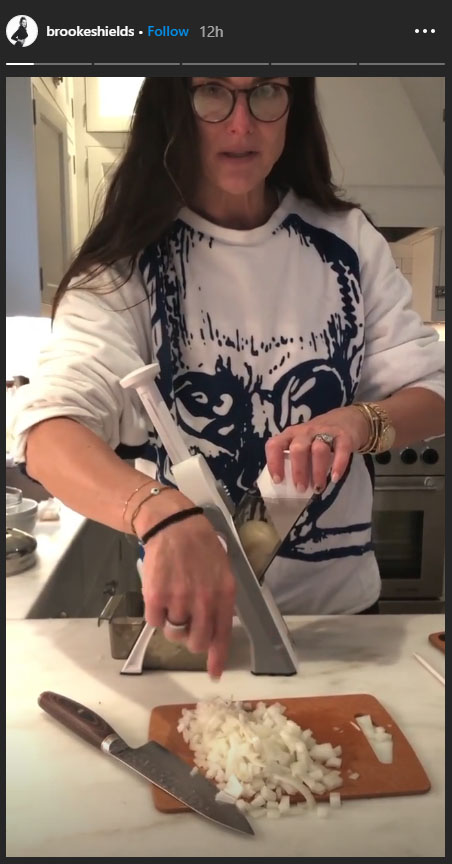 China urges U.S. not to withdraw from nuclear treaty with Russia