Home » Celebrities » Captain Tom Moore breaks the record for oldest person to have a No.1

Captain Tom Moore, 99, breaks the world record for the oldest person to have a No.1 single… as his version of You’ll Never Walk Alone with Michael Ball reaches the top spot

Captain Tom Moore has become the oldest person to have a No.1 single after his song with Michael Ball reached the top of the UK charts.

The record was previously held by Tom Jones, who reached No.1 with [Barry] Islands In The Stream aged 68 in 2006, 32 years younger than Tom is now.

Captain Tom, who won the hearts of the nation with his National Health Service fundraising bid, will still hold the top spot when he celebrates his 100th birthday on April 30 next week. 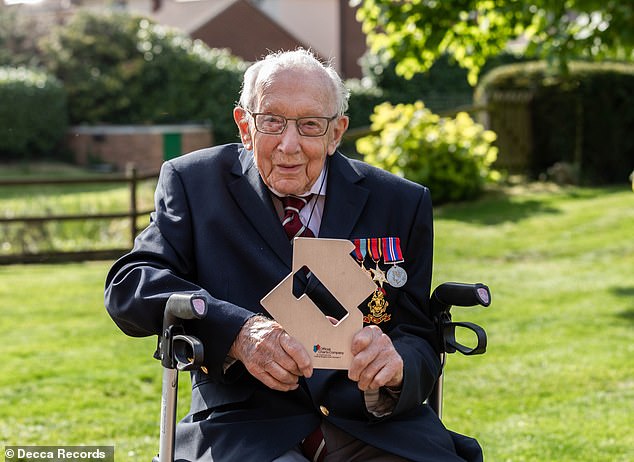 Champ! Captain Tom Moore has become the oldest person to have a No.1 single after his song with Michael Ball reached the top of the UK charts

Their lead did appear to be threatened by The Weeknd, Drake and Dua Lipa, however The Weeknd backed the veteran in a tweet on Thursday afternoon.

Abel Tesfaye – known as The Weeknd – tweeted his support of Captain Tom’s Official Chart bid to his 11.8 million followers, wishing him a happy birthday.

The former British Army Officer took to Twitter on Friday to share his gratitude to the Starboy hitmaker, 30, for supporting his song. 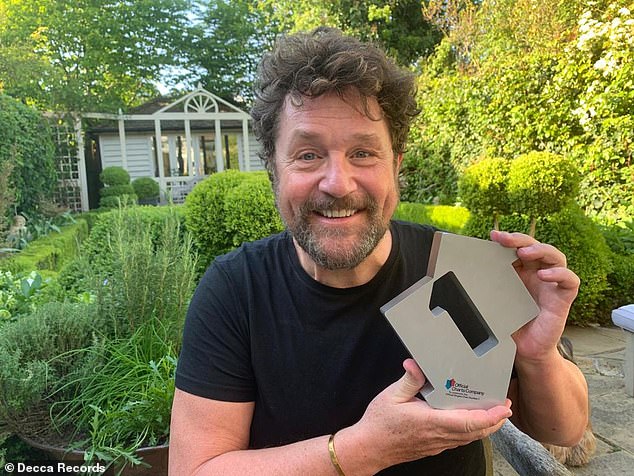 Number one! It is also the first time that Michael has ever managed to bag a No.1 single

Tagging the singer in his sweet message, Captain Tom, who has just been awarded a Pride Of Britain Award, said: ‘My goodness, how gracious of you @theweeknd Benji tells me you’re rather talented and very popular! What a kind gesture. Thank you!’

Speaking from his home in Bedfordshire, where he lives with daughter Hannah and her family, Captain Tom said: ‘What wonderful news to receive today, a No.1 single and a record breaker too – my grandchildren can’t believe I am a chart-topper!

‘I have to thank Michael Ball, the NHS Voices of Care Choir and everyone behind the scenes, who shared their talents and expertise in order to raise money for the NHS, to whom we owe so much. 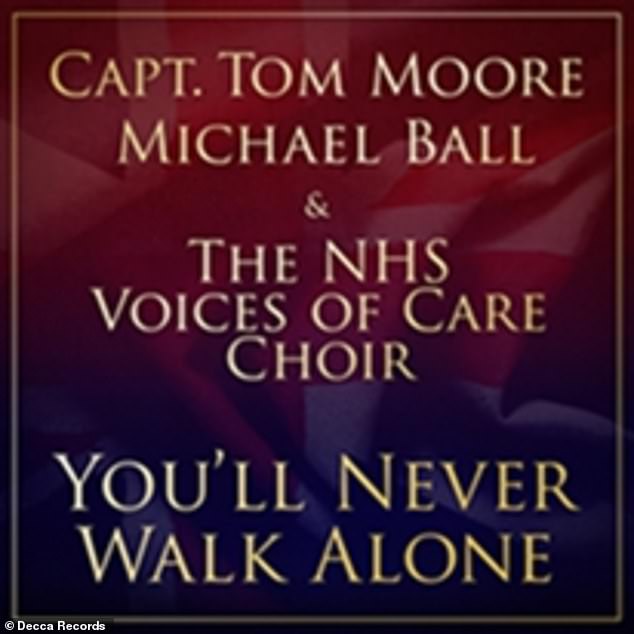 ‘And, of course, the public for buying the single and donating – we’re in this together, and I am forever grateful for your support. And this just proves ‘You’ll Never Walk Alone’

It also marks the first time Michael has achieved a No.1 single after his track Love Changes Everything managed to reach No.2 in 1989.

Michael said: ‘This is the most extraordinary thing, one of the proudest moments of my career. But it’s not about me it’s about Captain Tom, thank you for giving him a No.1 on his 100th birthday!’ 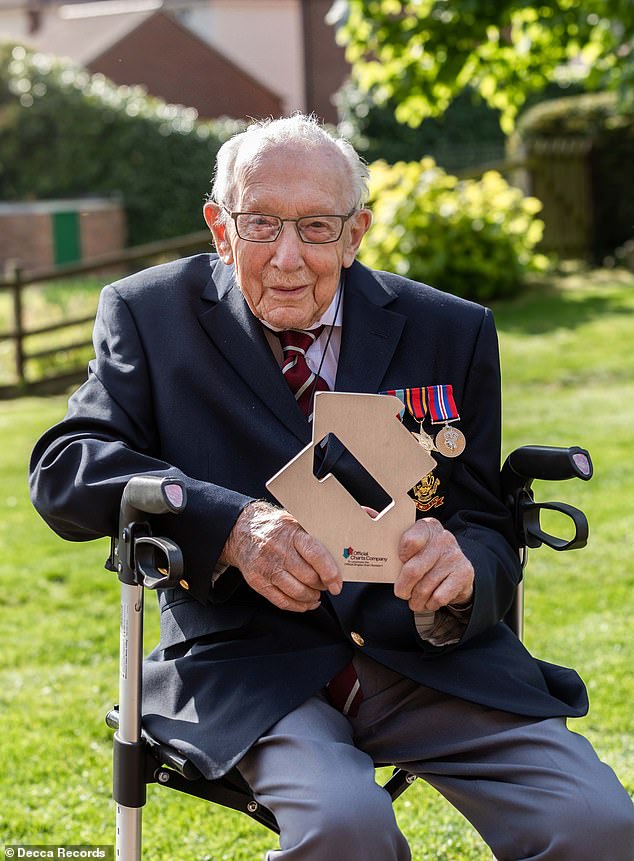 Celebrate: Captain Tom, who won the hearts of the nation with his National Health Service fundraising bid, will still hold the top spot when he celebrates his 100th birthday on April 30 next week

Co-Managing Director of Decca Records Group, Tom Lewis says of the triumph ‘This has been the most incredible, exciting team effort.

‘Everyone at Decca has completely fallen in love with Captain Tom. We felt we had to do everything possible to add a No.1 single and UK chart history to his already extraordinary list of achievements.

‘We’re absolutely delighted for Captain Tom and also for Michael who has made chart history of his own by landing his first number 1 single. Special thanks must go to Ste Softley, Phil Bowdery, Nick Patrick and Jim Hawkins who created and delivered the track within one day!’ 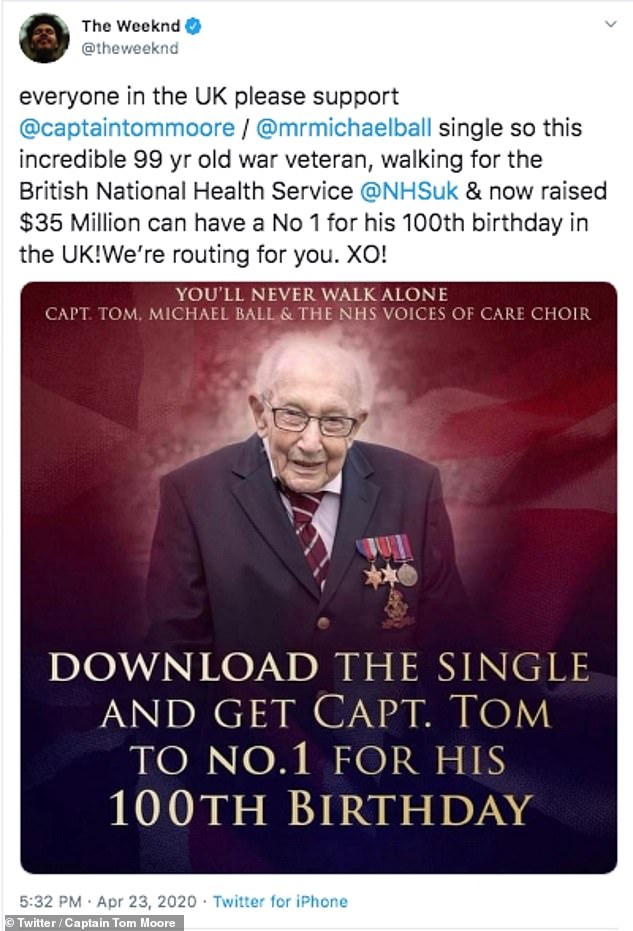 ‘We’re routing for you!’ On Thursday, the Heartless hitmaker promoted the former armoured warfare instructor’s campaign to reach number one

Chief Executive of Official Charts Company, Martin Talbot, comments: ‘The sight of Captain Tom Moore and Michael Ball at the top of the Official Singles Chart this week should lift everybody’s spirits in these extraordinary times.

‘We are absolutely delighted to see them at the pinnacle and setting new landmarks as they go – including a record as the oldest Number 1 Singles artist of all time.

‘It has been a roller coaster week, starting with a big initial lead for Capt Tom, before The Weeknd closed the gap yesterday to almost nothing – before a massive surge in the final day by Capt Tom. Huge thanks to the Weeknd for lending his support at the eleventh hour. 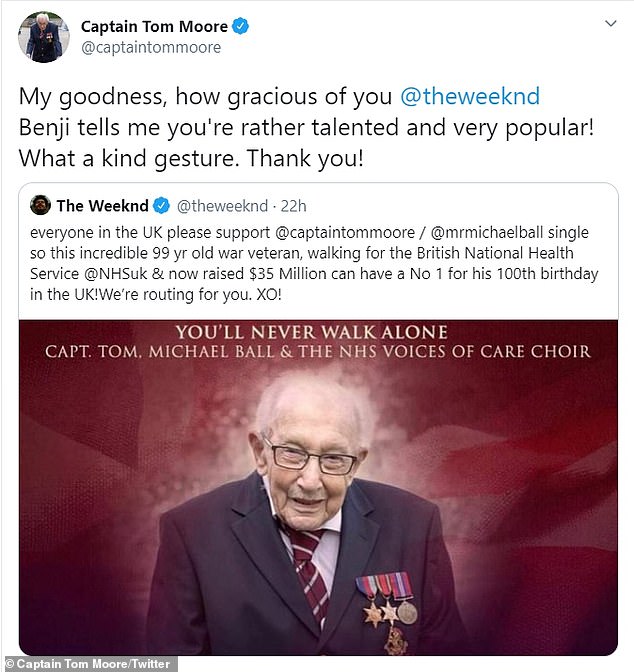 Sweet: Sharing his gratitude, Captain Tom said to The Weeknd: ‘My goodness, how gracious of you @theweeknd Benji tells me you’re rather talented and very popular!’

Sharing his gratitude: The Weeknd was equally delighted by Captain Tom, as he responded: ‘thank YOU Sir and we all wish you a happy birthday. XO [sic]’ 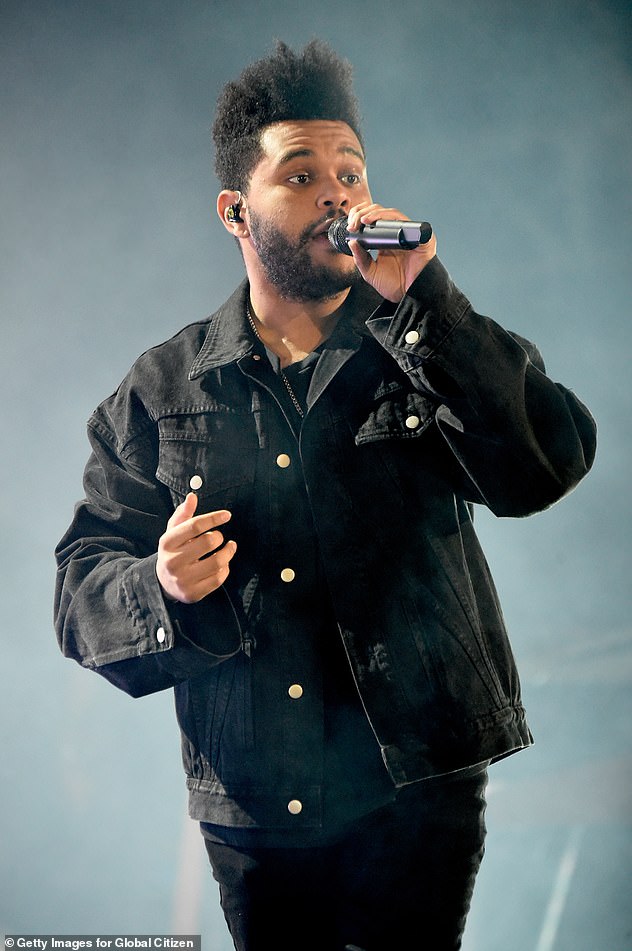 Tight gap: The musician’s Blinding Lights is catching up to the 99-year-old WWII veteran and Michael Ball’s cover of You’ll Never Walk Alone (pictured in September 2018)

‘But this is Captain Tom’s week – congratulations sir and happy birthday for next us week. You are a hero to all.’

Captain Tom started his walk (100 laps of the garden, 10 per day) less than four weeks ago with the initial goal being to make £1,000 for the NHS, in time for his 100th birthday. He has now raised almost £29 million.

100 per cent of the proceeds from the single will be donated to Captain Tom Moore’s 100th Birthday Walk in aid of NHS Charities Together which supports the incredible NHS staff and volunteers caring for COVID-19 patient. 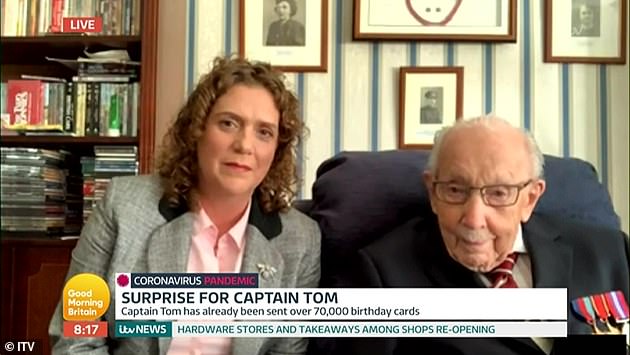 Milestone: Captain Tom will receive a Pride Of Britain award, with his fundraiser becoming the biggest in JustGiving history

3,000 Reviewers (& Vanessa Hudgens) Are Obsessed With These Hair Vitamins

Xbox Game Pass: Why Microsoft Calls It a Blessing, Not Threat to Consumers, Developers

Dr. Phil Is Getting Lots of Backlash for His Controversial Comments on Coronavirus

Cecil Rhodes protests will CONTINUE until statue is removed