Partnering up! It looks like Chrishell Stause might have found a connection with Dancing With the Stars pro Keo Motsepe during her time on season 29.

“Chrishell Stause and Keo Motsepe are officially dating,” a source tells ET. “Keo and Gleb [Savchenko] are best friends… Chrishell and Keo are both awesome and felt like, ‘I’m single, you’re single. Let’s try this.’”

Stause — who was paired up with Savchenko during the recent season of the hit ABC reality dance competition series — posed for a flirty snapshot with Motsepe, which the pro dancer posted to his Instagram Story on Wednesday night.

In the pic, Stause smiles into the camera as Motsepe’s face is partially hidden by her hair as he appears to kiss the side of her head.

Motsepe captioned the pic with a heart emoji, and Stause shared it to her own Instagram Story.

Later, Motsepe posted a cute clip to his own Story, showing himself and Stause sitting side by side.

Motsepe appears to surprise Stause with the fact that he’s taping her sitting next to him, and she laughs. He captioned the brief video, “I will always make you smile.” 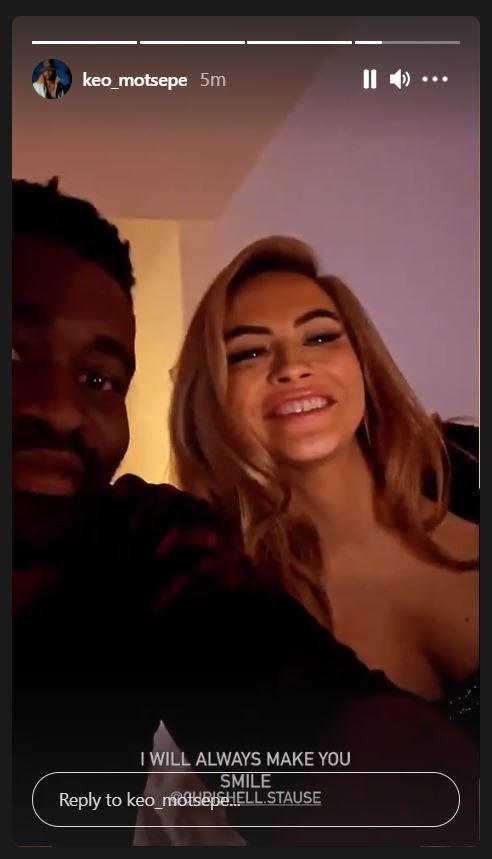 The posts came several hours after Stause shared a clip that appeared to show the two of them working out together inside a gym, while wearing face masks for protection.

DWTS cast members like Alan Bersten, Emma Slater, Nev Schulman and Savchenko expressed their support for the pair in the comments. Earlier this month, Stause took to social media to slam rumors she had romantically connected with Savchenko amid his split from his wife.

During the season, Motsepe was partnered with actress Anne Heche, and the pair were the third couple to be eliminated. Stause and Savchenko made it four weeks longer and were the seventh couple to get the axe.

Check out the video below for more on Stause’s DWTS journey.

‘Friends From College’ Gets Season 2 Premiere Date On Netflix

Samsung’s Galaxy Fold is very exciting, if not perfectly smooth