Last night I dreamt I went to Manderley. Only I wasn’t dreaming, I was watching The Deceived (C5), a four-part chiller that steals shamelessly from Daphne du Maurier’s Rebecca.

Both the 1938 novel and the wonderful movie they made of it two years later starring Oscar-nominated Joan Fontaine opened with that haunting line: ‘Last night I dreamt . . .’

The Deceived began with the same image, of a desolate country house rising out of the mist, its windows like hollow eyes. But the first line was more ominous: ‘I was always frightened of the house from the first moment I saw it.’ 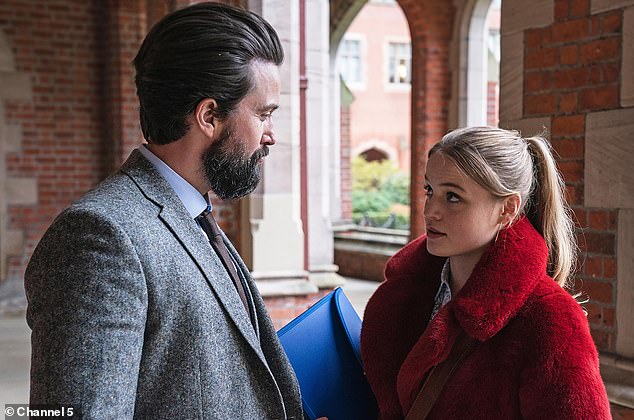 Emmett J. Scanlan, last seen bleeding to death in Sky Atlantic’s Gangs Of London, plays the womanising academic, a man whose hair is as smooth as his lies

The words were spoken by Ophelia (Emily Reid), a Cambridge undergraduate who has travelled to rural Ireland in search of her missing literature professor . . . who is also her lover.

She arrives to discover Prof Callaghan at his own wife’s funeral. Emmett J. Scanlan, last seen bleeding to death in Sky Atlantic’s Gangs Of London, plays the womanising academic, a man whose hair is as smooth as his lies.

Emmett has also starred in Peaky Blinders and The Fall. We’ve seen him shot, tortured, run over and brutalised in countless other ways, but his coiffure is always immaculate. That man must sweat hair gel.

As in any good Gothic melodrama, the handsome man of mystery is not to be trusted. Think of Laurence Olivier as Max de Winter in Rebecca, keeping his young bride a prisoner at Manderley with protestations of love.

Callaghan uses the same technique. ‘You assume you can walk away from this?’ he asks Ophelia, caressing her cheek. 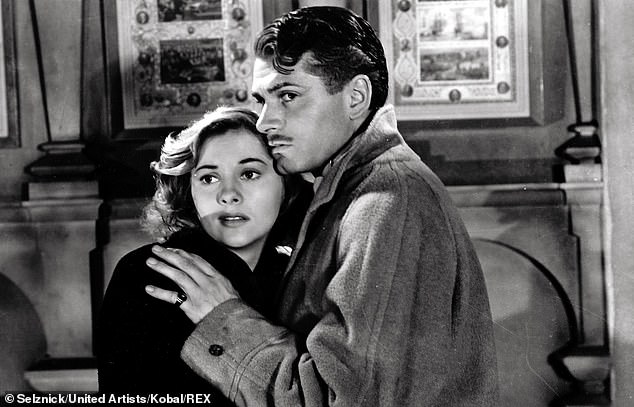 Last night I dreamt I went to Manderley. Only I wasn’t dreaming, I was watching The Deceived (C5), a four-part chiller that steals shamelessly from Daphne du Maurier’s Rebecca (above)

And all the other Gothic themes are present: the locked door in a deserted part of the house, the eerie sounds in the night.

Whenever Ophelia falls asleep, you know she’s going to wake up disoriented and alone, and that her first impulse will be to go exploring (stay away from that cobwebby summer house, young lady! Oh . . . too late).

But I’m not convinced our naïve heroine is as guileless as she seems. She wasted no time in seducing her professor, after all, and she’s quick with a lie when she has to be — telling the Donegal locals that she’s a literary agent, and not Callaghan’s student.

Now she says she’s pregnant with his baby. We’ve only got her word for it. Rebecca was an innocent: I’m not so sure about Ophelia. We’ll learn more tonight, as this four-part tale plays out.

No melodrama could be as emotionally wrought as the moment we saw a baby delivered by caesarean section in Panorama’s Stacey Dooley And The Lockdown Babies (BBC1).

The child was not breathing, and nurses could not detect a heartbeat.

Though the mother had tested negative for Covid-19, the baby could not be treated in the same room as her: the tests were wrong about 20 per cent of the time, and doctors dared not take the risk.

Instead, they carried the limp bundle into a corridor, where thankfully they were able to revive him.

The chaos caused by the virus on the wards at this Bradford maternity hospital was terrifying to see.

So many high-risk patients were being treated that the unit was shut to new admissions. Where expectant mothers were supposed to go instead, we weren’t told.

One midwife at the end of her shift told Stacey she had barely time to dash home, have a cup of tea and a biscuit, snatch 40 winks and then rush back.

‘I’m a key worker. This is where I belong,’ she said. This gripping half-hour report was too brief to do justice to her and her colleagues. 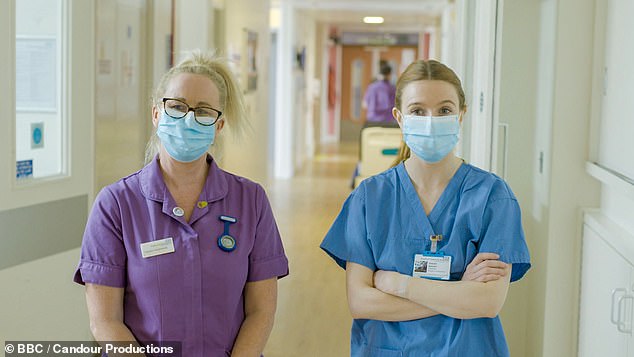 Biggest laugh of the night:

When Diane Morgan’s comedy short Mandy (BBC2) first aired last year, I called it ‘tears-downyour-face funny’. It was just as hilarious on a second showing.

Why Bruce Lee Had His Sweat Glands Removed From His Armpits