CHRISTOPHER STEVENS: Heavens above! Is that a flash of a nun’s knee on Call The Midwife?

The British Gas sell-off was never half so glamorous. Now the nuns of Nonnatus House are being privatised, which means a chance to own a share in Nurse Trixie, wearing a lacy pink uniform.

It’s 1966 on Call The Midwife (BBC1) and Sister Julienne (Jenny Agutter) is embracing private enterprise. To pay the rent and keep her mission running, she is hiring out midwives to the posh and pricey Lady Emily Clinic in Mayfair.

First to don the clinic’s regulation couture frills was Trixie (Helen George). With her frosted gold hair, she looked like a Barbie doll in sequined rubber gloves. 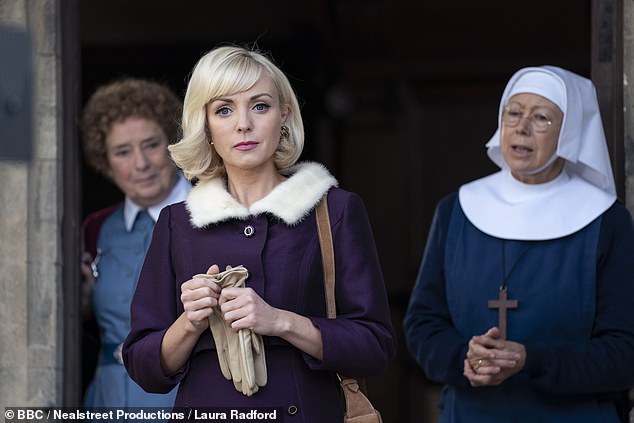 It’s 1966 on Call The Midwife (BBC1) and Sister Julienne (Jenny Agutter) is embracing private enterprise. To pay the rent and keep her mission running, she is hiring out midwives to the posh and pricey Lady Emily Clinic in Mayfair

Unsurprisingly, Trixie’s ten-kilowatt smile did appear to fizzle for a moment. She was still less pleased when the smarmy Herbert (his name really was Herbert) explained that her most important duty would be to keep his hot water bottle topped up . . . for warming his hands before every examination.

Call The Midwife has always been adept at indulging the very vices it pretends to criticise. For years it has luxuriated in nostalgia, sighing with pleasure over the sight of ragamuffin children playing hopscotch in the street.

At the same time, its storylines have insisted there was no such thing as ‘the good old days’, bemoaning the poverty and disease of postwar London.

Now it is becoming a parable that warns of the dangers of underfunding the NHS and allowing the wealthy first choice of the best medical care.

Conveniently, this allows writer Heidi Thomas to give her characters fancy frocks and fresh hairdos. Even the nuns were joining in, showing off their smart new habits (and, saints preserve us, their knees) at a fashion parade.

When you can see a nun’s legs, then you know the Sixties are really swinging.

Meanwhile, Sister Monica Joan (Judy Parfitt) was suffering a crisis of faith. She didn’t feel like praying. She didn’t even fancy a slice of cake.

All she wanted to do was sit in bed and watch crime dramas on TV. We’ve all felt a bit like that during lockdown. 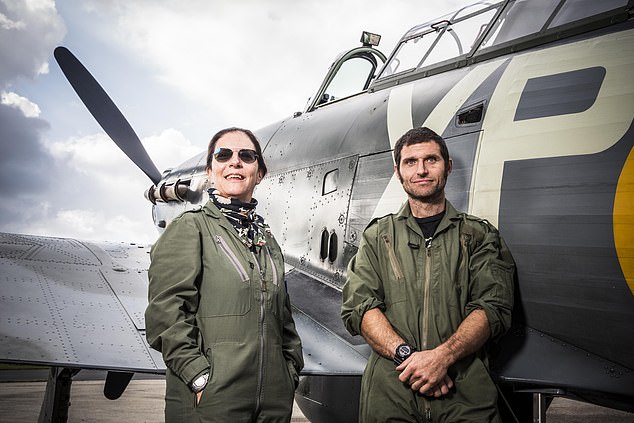 You won’t catch Guy Martin sitting in bed. The mechanic with a Lincolnshire accent as broad as the fens was learning to fly a World War II fighter, and doing it the way he does everything — flat out.

Guy Martin’s Battle Of Britain (C4) saw him almost plough the wing of a Tiger Moth biplane into the runway on his first take-off. Then he made a mess of basic aerial banks and turns, forcing his instructor in the passenger seat to take over. ‘I have control!’ she yelped, grabbing the joystick.

Guy wasn’t bothered. ‘Get back on the oss,’ he said cheerfully, ignoring the fact that this ‘oss’ was liable to gallop, propeller first, into the ground.

He got the hang of it, though. ‘I’m not that clever but me brain soon sussed out what to do,’ he explained.

When he pressed his eye too close to his rifle sight on the shooting range and suffered a cut forehead from the recoil, he thought it was hilarious.

For the rest of the episode, he had a livid wound around his eyebrow — dubbed a ‘hunter’s moon scar’ because of its shape. Did he care? Of course not.

Next week, he’s piloting a Hurricane in a dogfight against a Messerschmitt. You could almost feel sorry for the Luftwaffe.

Dwayne 'The Rock' Johnson Buys the XFL for $15 Million

Trump instigates ‘lock him up’ chant for Obama at rally

Harry Potter: Hogwarts Mystery adds pets to the game – and is charging £12 for an owl