CHRISTOPHER STEVENS reviews last night’s TV: Apocalypse Iraq – how the hell of war turned Nate to the dark side

Once Upon A Time In Iraq

One leg bouncing on the ball of his foot, sitting on his hands or wiping his palms on his trousers, the former U.S. Army colonel Nate Sassaman seemed to be tethered to his chair by raw nerve endings.

After he returned from a year-long tour of duty in Iraq, he said, he felt as though his children didn’t know him. He was so alienated from civilisation that, when a driver overtaking on the freeway gave him a one-finger salute, Sassaman found himself reaching for the pistol he no longer wore.

He had ordered men to be beaten and their families terrorised, he told the camera on Once Upon A Time In Iraq (BBC2), for less than that. 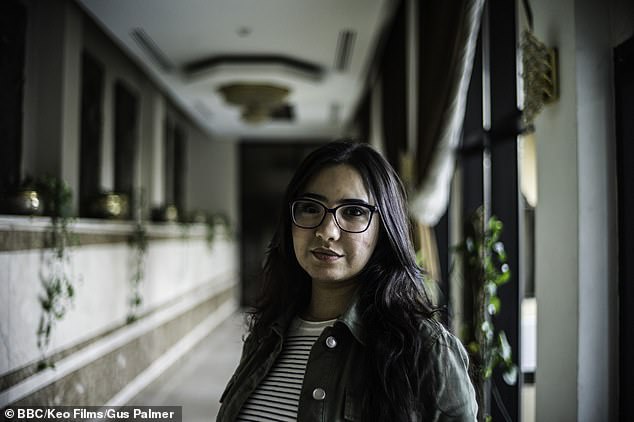 This five-part series, recounting the Allied overthrow of Saddam Hussein in 2003 and its aftermath, is a vivid but conventional documentary. Pictured: Witness Alaa Adel

Last week’s opening episode of this five-part series, recounting the Allied overthrow of Saddam Hussein in 2003 and its aftermath, was a vivid but conventional documentary. With contributions from a dozen eyewitnesses, including Iraqis who were teenagers during the invasion, it ran briskly through the main events without breaking new ground.

The second part was shockingly different. Most of it focused on the testimony of Lieutenant Colonel Sassaman, with different perspectives supplied by two journalists who encountered him in the field — New York Times writer Dexter Filkins and war photographer Ashley Gilbertson. At first, Sassaman seemed a decent, sympathetic figure — an idealist tormented by the things he saw. He was at pains to emphasise that all he ever wanted was to cement peace and democracy in the Middle East.

It took 40 minutes for the full horror of what he became to dawn on the viewer. After a close friend was killed in an ambush by Iraqi insurgents, Sassaman surrounded one village with barbed wire and threatened to shoot anyone attempting to leave. The men were rounded up and put in cages.

His battalion searched every house, not once but repeatedly, blowing the compound doors open at night with high explosive.

‘I didn’t want to put up with any kind of resistance to us,’ he said, his legs still jack-hammering. ‘We were the law.’

Costume sparklers of the week:

Gloria Hunniford’s necklaces, worn in her new morning series Food: Truth Or Scare (BBC1), are a glory to behold. With pearls like tennis balls and lumps of amber as big as bricks, it’s a wonder she can turn her head.

The portrait that emerged, of a good man corrupted by war, felt closer to a character in a film than a documentary. Sassaman seemed to be the living echo of Marlon Brando’s insane Colonel Kurtz in the Vietnam movie Apocalypse Now. He recognised that the Allies’ failure to control the murderous chaos in Iraq following regime change, and what he called the ‘pure evil’ of ‘war as an institution,’ had caused immeasurable suffering.

But he wasn’t able to say that anything he did was wrong. The closest he came was another movie reference, this time to Star Wars: ‘Focused on combat operations,’ he said, talking of his last months in Iraq, ‘I’m clearly on the dark side now.’

Also living on the dark side, despite the musical genius that survived even when he was dying from cirrhosis of the liver, was Ludwig van Beethoven. His treatment of his nephew and adopted son, Karl, drove the young man to attempt suicide.

Being Beethoven (BBC4), the three-part life history of a man regarded by many classical musicians as the greatest of all composers, has not been short of these lurid passages.

Beethoven, who never married, so loathed Karl’s mother that he could not bring himself to say her name, Johanna. Instead, he referred to her as ‘the Queen of the Night’ and accused her of all kinds of immorality.

The string quartets and talking heads have been intercut throughout with striking images — including shots of ravishing sunsets, almost as lovely as the music.

Rosario Dawson officially comes out as part of the LGBTQ community