Home » Celebrities » Claire Sweeney: The 9 To 5 show is joyous and glamorous 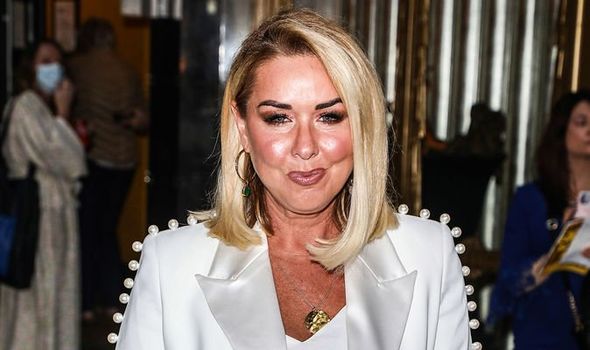 That’s when Claire – who is about to star in the touring production of 9 To 5: The Musical – first sang in public. Her incredible career, from Brookside to the West End stage, all started with a leg of lamb at the Montrose Social Club in Liverpool.

“It was pensioners’ night on a Tuesday,” she recalls. “And my dad, who was a butcher, bribed the concert secretary with a leg of lamb to let me sing.

“I came out in my bridesmaid dress and my introduction was ‘She’s only 14, shut up and give her a chance’, followed by, ‘By the way the bingo tickets and sandwiches are being served at the back.’ So, everyone rushed for bacon butties and I sang to a queue of people waiting for their bingo tickets. It was real Phoenix Nights stuff.”

Claire, 50, a funny can-do woman with a big heart, still remembers that first set. “I opened with Somewhere Over The Rainbow, then Pal Of My Cradle Days so they could waltz, then numbers by Andrew Lloyd Webber and Ella Fitzgerald… so it was quite ambitious.

“When I got better, I got £25 a gig. I’d spent summer working in Dad’s butchers, doing really hard, manual work; so, to earn the same money in one set that I’d earned in a week…it was a no-brainer for me.”

The Sweeneys lived in Walton, near Everton’s Goodison Park ground. “It was a working-class background, rough and ready, but everybody looked out for each other,” says Claire, whose older brother had left home to join the army.

Her rise to fame was the perfect cocktail of talent and application. At eleven, her parents paid to put her through the Elliott-Clarke stage school; she later attended London’s Italia Conti. “It was a struggle for them,” she says. “But they worked hard and I never wanted for anything.”

She lives in London’s Pimlico with her son Jaxon, 7 – Claire separated from his father in 2015. “I love it,” she says. “It’s a little hidden gem.” Her father Ken passed away on Christmas Day 2017; her ex-barmaid mother Kathleen still lives in the house Claire grew up in. “Jaxon brings her a lot of joy,” she says.

Claire finishes pantomime in Cinderella, in Southport, today and roars when I ask if she’s playing Cinders.

“There are three ages of panto for women,” she says. “Principal boy, glamorous leading lady, and finally, you know you’re getting on when you become the fairy godmother…”

From tomorrow, Claire will be rehearsing for 9 To 5: The Musical. “I play Violet Newstead, who has balls of steel. The show is joyous and glamorous. I always thought Dolly Parton was a genius. I’d seen the movie and the TV series in the 80s, but the message is still current. Glass ceilings haven’t gone away.”

Claire has been “getting match fit” for the role by cutting down on booze and getting back into Bikram Yoga. “Weight goes on and off, it’s a daily battle but I’ve bought a good corset, that’ll help! And a pair of Spanks – passion killers!”

“I’d rather have a night in with Jaxon than go on a bad date.”

Friends like Tony Monarch, AKA renowned DJ Fat Tony, keep her laughing, and she adores John Bishop “one of the nicest men on the planet, and a great storyteller.”

Away from Brookside devotees, a sizeable number of fans love Claire for stage roles such Velma Von Tussle in Hairspray and Baroness Bomburst in Chitty Chitty Bang Bang.

Chicago was her first big West End musical. She played Roxie Hart and alluring posters of her in fishnets were plastered all over the tube. “It was quite something until I got to the poster at the bottom of the escalator and someone had blacked me teeth and stuck chewing gum on me ‘Mary’. That brought me down to earth with a bang!”

Growing up, Claire became obsessed with TV comedy-drama The Love Boat and auditioned for P&O Cruises at 18 – around the same time as she auditioned to play Jimmy Corkhill’s daughter Lindsey for one episode in Brookside.

“I got that one episode and then went to work on the ships. They’d ask me to come back for one or two episodes, but I said, ‘I’m not giving up six months work for two episodes.’”

It wasn’t quite The Love Boat. “I got off the cruise ship in Bombay and there were kids living in cardboard boxes. I went back to the ship and emptied my wardrobe. I got everything, gold leather hipsters, a rara skirt, and gave them all away on the quayside. It was heart-breaking.

“My Goanese cabin steward was dead protective because I was still a virgin – I’d never had a boyfriend. At Goa, he arranged for his family to collect me and take me to their village…the gran made a big stew and serving the meat to me, and the women made me a sari.”

After four years on the ships, she contacted the Brookside producers just as they were bringing the Corkhills into the Close. “Timing is everything,” she laughs.

Claire was 26 but says, “I looked 16! It was brilliant. I was financially stable; I was home and I was on TV! But I was terrified. I’d never acted before, I was a singer, and was constantly waiting to get caught out and sacked.”

She learnt her craft watching Dean Sullivan and Sue Jenkins play the dysfunctional Corkhills, and soon had major story-lines. “I’d be in the make-up chair at 8am, and still filming at 8pm… and then you’d have to go home and learn ten scenes for the next day.”

Fame came as a shock. Attracting stares made her feel “like I had my flies undone,” she chuckles.

Her TV highs include the first series of Celebrity Big Brother, and Strictly, but Claire prefers acting roles. She was “vile sullen airport worker” Maxine in Benidorm and “vampish and brazen” Hayley in Scarborough.

She presented ITV’s 60 Minute Makeover for two years, but stopped in 2005 to play glamorous Miss Adelaide in Guys & Dolls, opposite Patrick Swayze. “That was the icing on the cake,” she laughs. “Working with Patrick Swayze, and snogging him every night, slipping him the tongue…”

Claire got the bug for musicals after seeing Willy Russell’s Blood Brothers when she was ten, and finally worked with him playing Shirley Valentine in a two-hour one-woman show. “It finished just before lockdown. Imagine learning 50pages of script and getting cancelled! Willy told me, ‘It’s a mountain to climb but the views are beautiful when you reach the top’.”

She is patron of Claire House Children’s Hospice, near Wirral, and is involved with Queenie’s Christmas Charity which helps deprived kids in Liverpool.

Claire admits to two bad qualities “Hormones!” and “forgetfulness – the other day went to the cash machine and left money in it.”

What’s next, I ask? “I’ve got a good gig lined up for later this year,” she says. “A really good gig.” Odds on she won’t forget that.

'Ministry of Defence may have failed to protect life of engineer'