Editors note: Deadline’s Read the Screenplay series debuts and celebrates the scripts of films that will be factors in this year’s movie awards race.

After writer-director Siân Heder scored raves for her debut feature film Tallulah, she came to the attention of the producers who held rights to the acclaimed 2014 French film La Famille Bélier. “They were looking to do an American version of the film and really wanted a filmmaker to come in who had a unique take,” Heder told Deadline, noting that she was eager to explore deaf culture and American Sign Language on screen in CODA, the title of which derives from the acronym for children of deaf adults.

Coming from the hearing world, Heder quickly immersed herself in research to find techniques to tell the story of teenager Ruby Rossi (Emilia Jones), the only hearing member of her family, and how she learns to balance her sense of responsibility to her family members and her own hopes and dreams.

The Partnership: Siân Heder And Marlee Matlin On The Importance Of Casting Deaf Talent for 'CODA'

Heder was initially frustrated by the lack of cinematic forerunners to mine for inspiration.

“There weren’t a lot of movies I could look at where I could see deaf characters on screen,” she said. “I was going back 35 years to Children of a Lesser God.” That scarcity, however, was “very motivating for me, in terms of the story needs to be told and also the character at the center,” she adds. “I think the CODA experience is a very unique one: CODAs are raised within deaf culture, but live kind of between the hearing world and the deaf world. So I was very excited by the specificity and yet the universality of the story.”

Heder ultimately set the story in the Massachusetts fishing community of Gloucester, a region she was intimately familiar with from summering there in her youth. “I knew that town and the fishing community there really well,” she said. ”For us, it was really about not just diving into deaf culture, but the culture of the fishing community in this town and how specific that was…There was a lot of conflict happening in the community. There were a lot of issues family fishermen were facing in terms of losing their livelihood.”

One of the most crucial challenges facing Heder, who crafts a lot of humor into her work, was writing dialogue in a language that was essentially foreign to her. “It was interesting writing the script obviously in English, because that’s my first language and that’s how I write,” she recalled, noting there’s no written form of ASL. However, the production’s ASL Masters as well as the cast helped determine “how humor can live in sign, and how a joke transforms when it becomes purely visual; how there are kind of jokes that live purely within deaf culture that can be only visual jokes.”

She particularly credits cast member Troy Kotsur, who with Marlee Matlin plays Ruby’s father and mother, for helping shape dialogue into vivid – and occasionally risqué – visual form. “[Once Troy] got his hands on them, they took off to a place that I was like, ‘Oh, the MPAA is never going to rate this movie as anything other than something totally obscene,’ because Troy is so visual and blunt with his language,” Heder says. “But it was just delightful, actually.”

“It’s the most cinematic language out there, so when writers talk about the experience of watching their words come to life, this was the most literal version of that,” says Heder, “and very beautiful to write something, have it in my head, have these characters in my head, hear their voices and then realize I was never going to hear their voices, I was going to watch this come to life, and it was very moving.”

Apple acquired CODA for a record $25 million-plus after its opening-night premiere at Sundance, where it won the Special Jury Award for Ensemble Cast, the Directing Award, the Audience Award and the Grand Jury Prize in the U.S. Dramatic Competition. The streamer released it in theaters in August and it is now available on Apple TV+.

The pic is already gaining momentum this awards season, with an Ensemble nom at the SAG Awards earlier this week along with a Supporting Actor nom for Kotsur. who with Jones won Gotham Awards in the fall. The film received Best Picture noms from the Golden Globes and Critics Choice Awards and was named an AFI Top 10 film of the year. 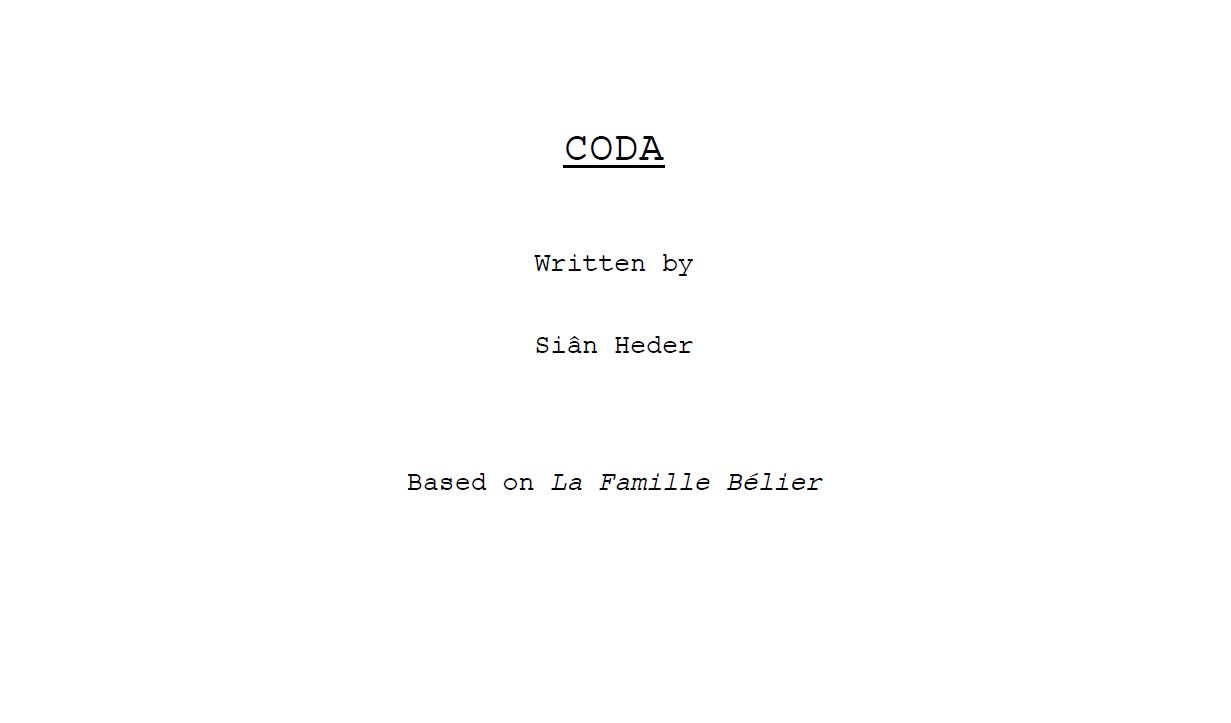 ‘Scream’ If You Wanna Go To The Movies: Horror Pic At $36M; ‘Spider-Man’ Besting ‘Black Panther’

Olyphant Back For FX’s ‘Justified: City Primeval’; Allen In ‘Santa Clause’ At Disney+

‘The Tragedy Of Macbeth’: Read The Screenplay For Joel Coen’s Potboiler Take On Shakespeare’s Tragedy

‘King Richard’: Read The Screenplay That Aces The Venus And Serena Williams Story

“I Feel Powerless”: How Five-Year Plans Have Been Derailed By The Pandemic