Dan Walker, 43, was called out for an awkward photo by his former BBC Breakfast colleague Steph McGovern, 37, who joined the presenting team for the last time on Wednesday. The latter left the BBC show last year to go on maternity leave, and revealed she would be departing permanently as she prepares to move to Channel 4.

You can let go of me now Dan

Wednesday seemed an emotional day for everyone at BBC Breakfast, as there were touching tributes and sweet messages flying left, right and centre on social media from the team, who were devastated to be saying a final goodbye to Steph.

After eight years on the show, the journalist called the BBC her “home” and the BBC Breakfast team her “family” but she will now be fronting her own show.

Dan was quick to post his message on Twitter, where he wrote: “What an absolute treat to have @stephbreakfast back on the #BBCBreakfast sofa this morning and lovely to meet little mini McGovern too.”

He accompanied the post with a photo of Steph, himself, Louise, Sally Nugent and Carol Kirkwood all sitting on the red sofa together. 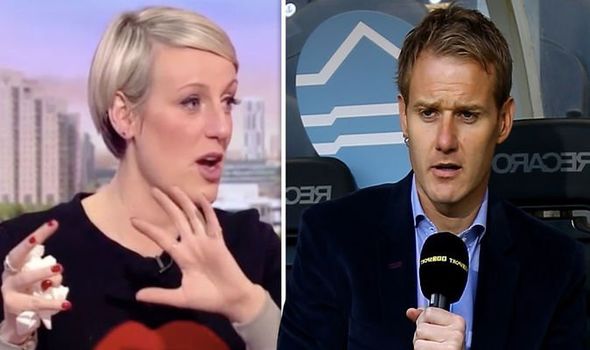 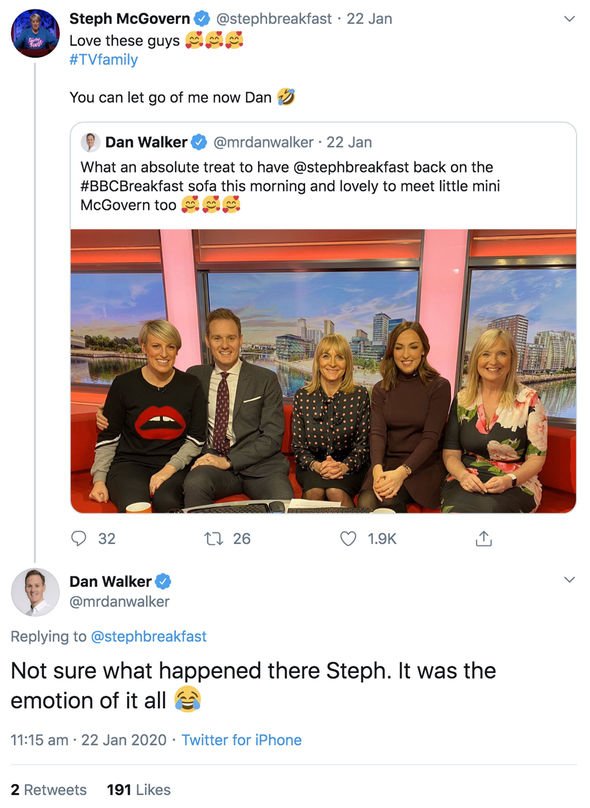 Steph’s reappearance at her old stomping ground was a nostalgic one for many viewers, who wished her well on her new venture.

But, she continued to make an awkward joke in reference to the fact Dan had his arm around her in the photo.

“You can let go of me now Dan,” she continued, with a laughing face. 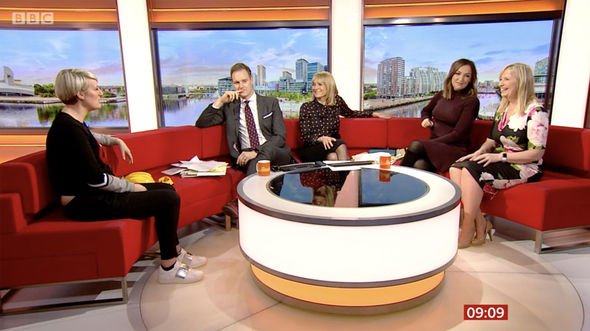 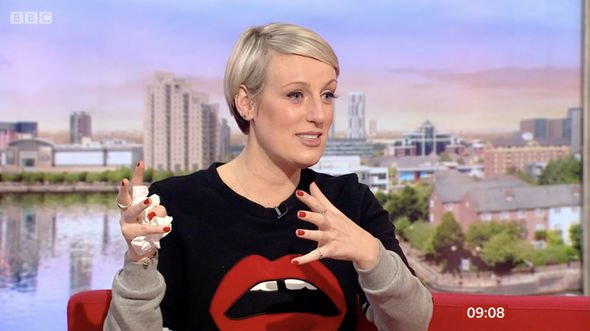 Red-faced, Dan acknowledged her joked, and hit back with: “Not sure what happened there Steph. It was the emotion of it all!”

Fans flocked to the comments section to have giggle at the friendly exchange between the two.

One said: “Steph must be special, it was only yesterday Dan was saying that he wouldn’t hug Louise for a picture!”

Another joked: “There’s always one thorn in every bunch of roses Dan.”

And Steph too, was overcome with emotion during her midweek feature.

It seems her final appearance was too much for her to handle as she burst into tears when her co-hosts reflected on her time with the BBC.

A montage of her highlights over the past decade was broadcast, and after the video had finished playing Louise had to hand her a tissue, saying: “Oh we didn’t mean to make you cry!”

Struggling to compose herself, she replied: “I know, I totally didn’t expect to cry.

“It’s been brilliant, and do you know what? I love the family here.

“The team behind the scenes who work day and night to make us look good, and all the crew and everything!”

Steph was then surprised by a number of former colleagues, including Sally Nugent and Carol Kirkwood, who had been gushing over her youngster backstage.

Love Island dates discrepancy: One couple get luxury yacht and other gets circus