In an outdoor parking lot, Ellen DeGeneres took a phone call with her face mask off nine days after her coronavirus announcement. Ellen’s rep gave HollywoodLife an update on the talk show host’s quarantine status.

Shy of two weeks after revealing a positive COVID-19 test, Ellen DeGeneres was pictured with her face mask off while standing in an outdoor parking lot. The talk show host was instead wearing her face mask around her neck as she spoke on her cellphone over the weekend, holding it close to her mouth. However, no one could be seen standing near Ellen in the photo that was taken nine days after announcing her diagnosis — which would be this past Saturday, Dec. 19 — according to the photo agency that obtained the snapshot of Ellen out and about. The TV personality was picking up home goods from Garde in Montecito, CA. 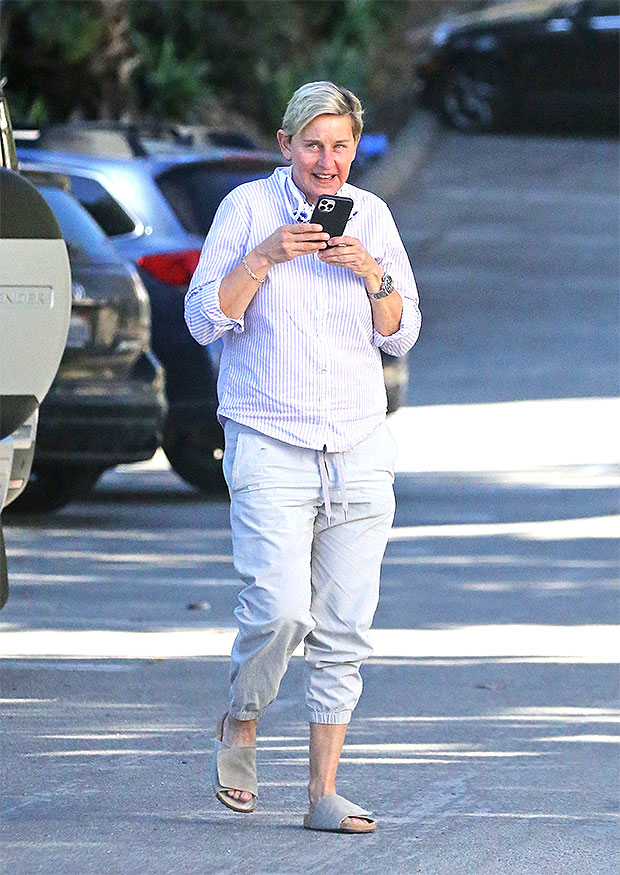 Despite her recent COVID-19 announcement, Ellen “finished her quarantine” and “is being tested regularly,” a rep told Daily Mail on Dec. 20. HollywoodLife also reached out to Ellen’s rep, who confirmed that Ellen is out of quarantine. However, even while quarantining and testing regularly, the CDC recommends that people in the U.S. “wear a mask in public settings when around people who don’t live in your household.”

Ellen revealed that she was feeling “fine” while announcing that she had contracted the coronavirus. “I want to let you all know that I tested positive for Covid-19,” Ellen wrote in an Instagram post shared on Dec. 10. She continued, “Fortunately, I’m feeling fine right now. Anyone who has been in close contact with me has been notified, and I am following all proper CDC guidelines. I’ll see you all again after the holidays. Please stay healthy and safe. Love, Ellen.”

The announcement meant Ellen has also taken a hiatus from The Ellen DeGeneres Show amid the holiday season, after returning to the studio to film her talk show in September. Season 21 premiered on Sept. 21, after former executive producers Ed Glavin and Kevin Leman, and co-executive producer Jonathan Norman, were reportedly fired from the show and replaced by Mary Connelly, Andy Lassner and Derek Westervelt, per a report from our sister publication Deadline in August. The new season has invited several celebrity guests like Justin Bieber to chat with Ellen in the studio, but has also conducted interviews with stars like Chance The Rapper and Aubrey Plaza via video.

Before the shakeup in the show’s leadership, The Ellen DeGeneres Show underwent an internal investigation over allegations of a toxic work environment in July. Ellen was “upset” and “actually is interested in righting a wrong,” a source close to the longtime TV personality EXCLUSIVELY told HollywoodLife in August, who added, “She doesn’t want to be remembered for this, as she has been such a champion for so many good causes. She knows she has to ride this wave and make people trust her again and she is up for the fight.”

Sienna Miller & Lucas Zwirner Split After One Year of Dating