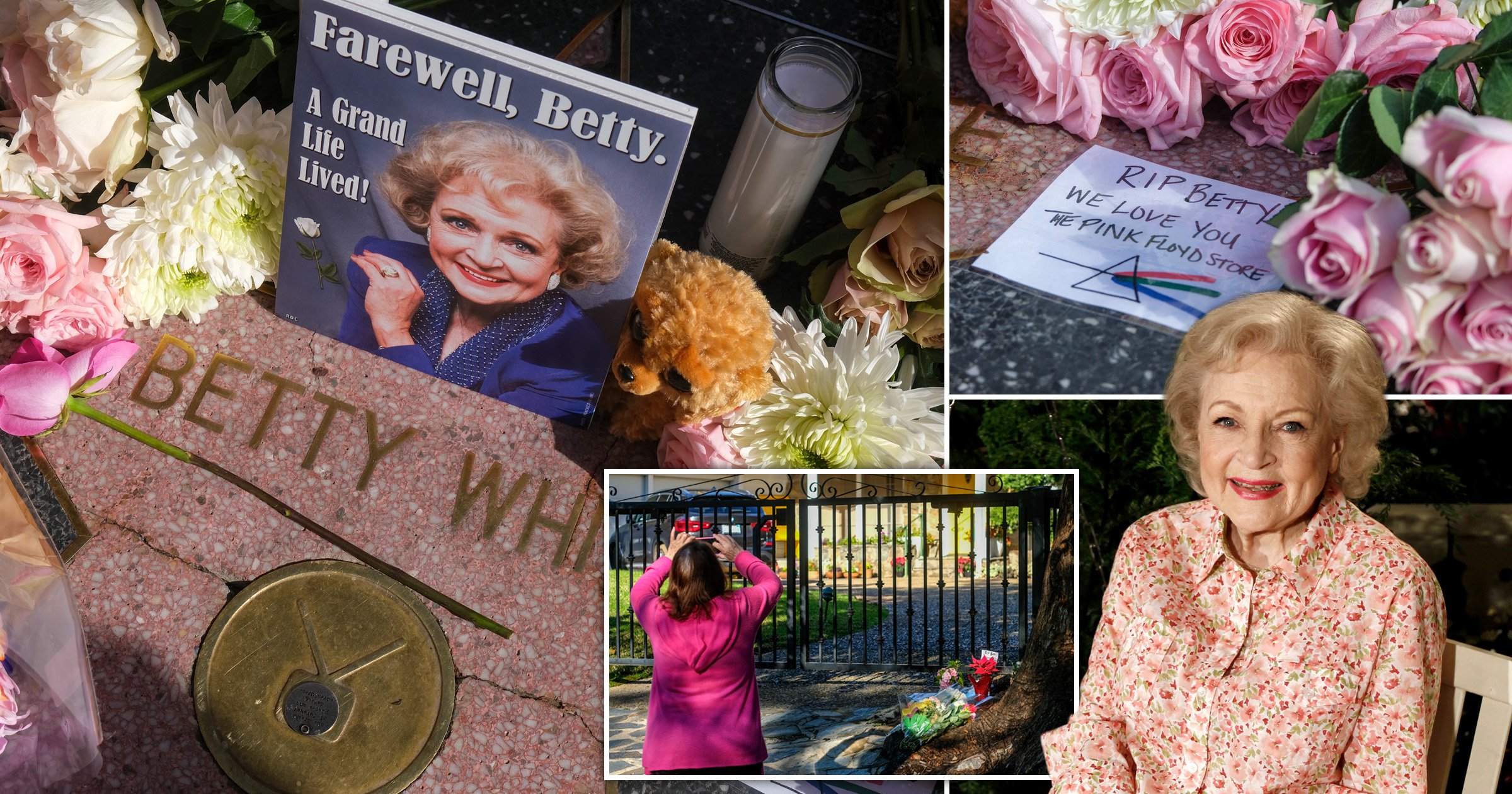 Fans have been paying tribute to Hollywood icon Betty White following her death at the age of 99.

Flowers, stuffed toys, candles cards have been left at the Hollywood Walk of Fame star of the late actress, in Los Angeles.

Bouquets have also been left outside the gates of her home, where fans stopped to pay their respects to the Golden Girls star.

They also left notes in remembrance of her, with one reading: ‘Betty White rest in peace, you were a great neighbor and kind person.’

She was just weeks away from her 100th birthday when she died at home.

Famous fans and friends across the globe have been remembering the legendary actress with funny anecdotes and touching tributes.

Viola Davis wrote on Twitter: ‘RIP Betty White! Man did I think you would live forever. You blew a huge hole in this world that will inspire generations. Rest in glorious peace….you’ve earned your wings.’

Ryan Reynolds added: ‘The world looks different now. She was great at defying expectation. She managed to grow very old and somehow, not old enough. We’ll miss you, Betty. Now you know the secret.’

Sandal star Kerry Washington wrote in her tribute that ‘heaven just got a new superstar to celebrate with tonight’, referring to White as ‘an icon, a legend, a trailblazer, a badass, and a ray of sunshine.’

Meanwhile, former First Lady Michelle Obama shared a picture of White with her and husband Barack’s dog, Bo, whom she ‘loved spending time with.’

The Becoming author wrote on Instagram: ‘Betty White broke barriers, defied expectations, served her country, and pushed us all to laugh. She was also an animal lover and activist, and Bo loved spending time with her.’

She added that ‘Barack and I join so many who will miss the joy she brought to the world.’

White was known for her saucy, up-for-anything charm and enjoyed a career spanning 75 years.

She was loved and respected universally and regarded as America’s grandmother for her kindness and bubbly personality.

The actress became one of the first women ever to star and produce her own TV show, Life with Elizabeth, in 1952.

TikTokers left disturbed by dog's apparent interaction with ghost: 'Haven't been this scared in a long time'