Gemma Atkinson thanks fans after engagement to Gorka

Radio host and TV presenter Gemma Atkinson, 36, took to Instagram to ask beauty salons to reopen, following a cheeky jibe made by her Strictly Come Dancing fiance, Gorka Marquez, 30. Posting on her Instagram stories, the drive time host revealed that it’s been so long since she had her “moustache” taken care of, her partner Gorka commented that it’s now “something else”. However, the Spanish dancer followed his fiance’s post with his own admission that he still finds his wife attractive.

The former glamour model took to Instagram to share with her 1.6 million followers the cheeky remark made by her soon to be husband.

Posting on her Instagram stories in bold black writing, the TV presenter wrote: “@gorka_marquez Legit said to me this morning, ‘Your moustache is something else'”.

She followed it up with: “Genuinely! Salons need to open right now!”, complete with two crying laughing emojis and a GIF of a hand holding a stick dripping with hot liquid wax.

On the next slide the actress poked fun at herself by posting a picture of herself smiling – but with a difference. 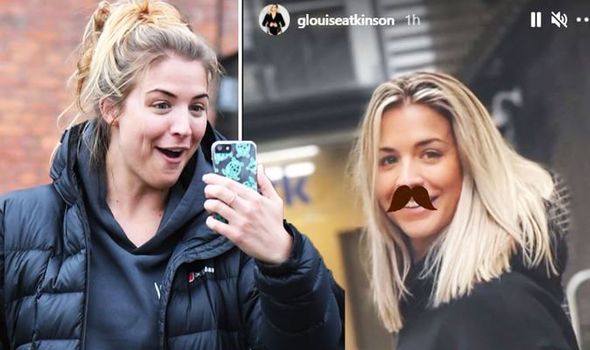 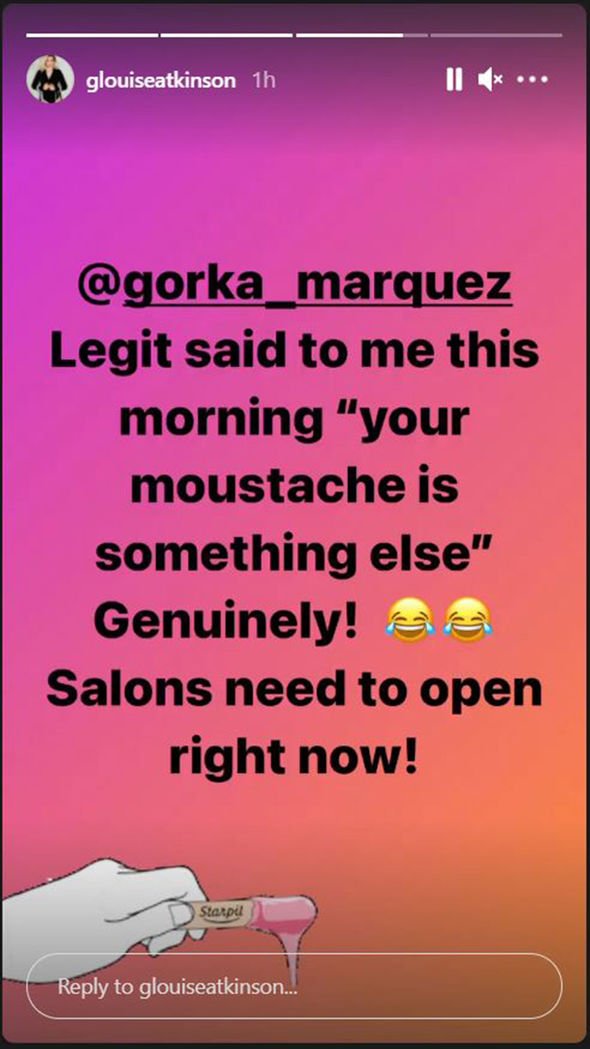 The former Hollyoaks star had placed a moving, cartoon moustache over her lip.

After seeing his fiance’s post, Strictly star Gorka reposted it with the cheeky caption: “But I still would 100 percent…” alongside a crying laughing emoji.

The couple sparked a frenzy among their fans when they revealed they were engaged earlier this month. 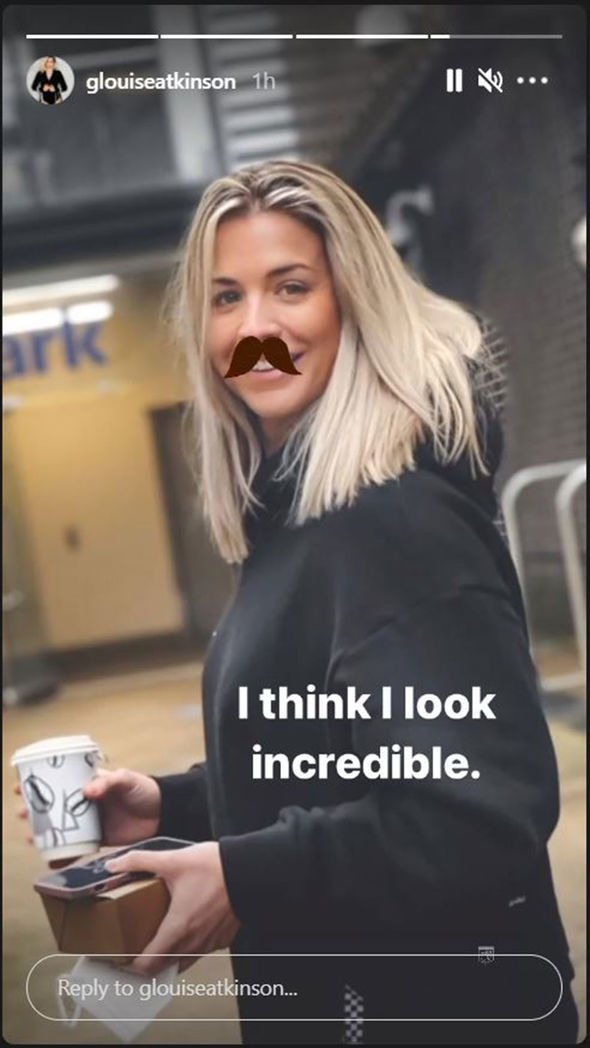 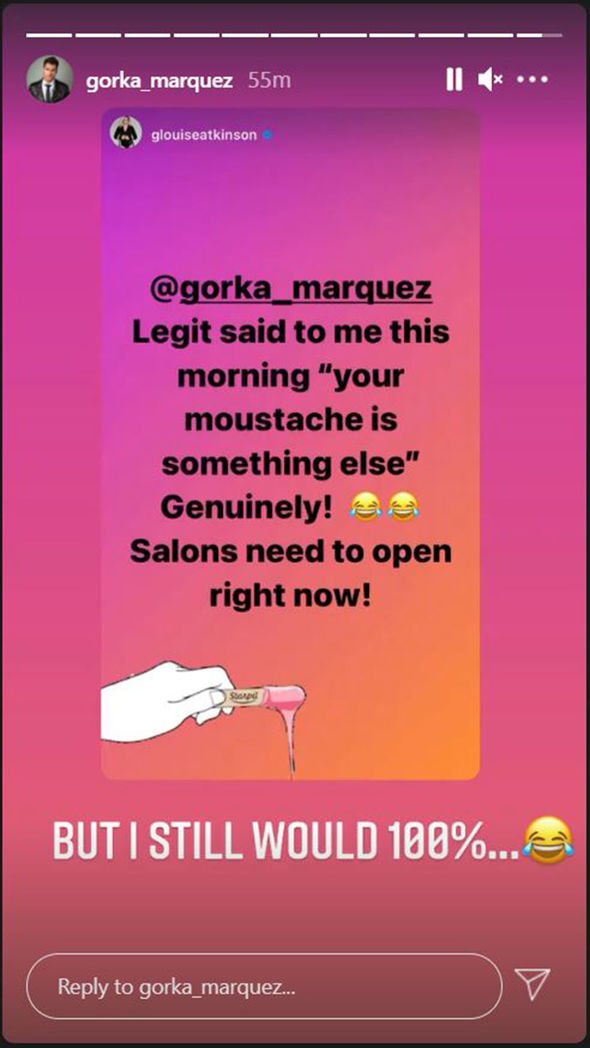 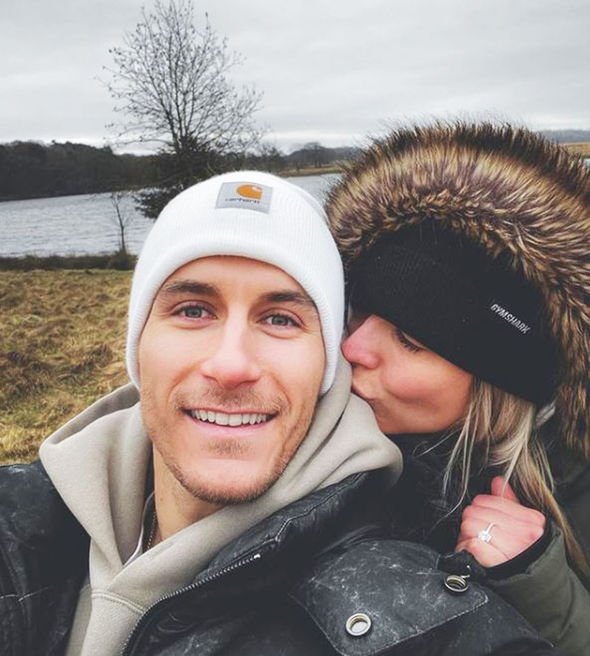 Gemma took to social media on Valentine’s Day to share the happy news.

She wrote: “Valentine’s forever… Of course I said yes”.

The post featured the happy couple outside wrapped up warm, with the model kissing her beau on the cheek.

Fans were also treated to a glimpse of Gemma’s stunning engagement ring.

The couple’s Strictly Come Dancing family were quick to inundate the pair with congratulations.

Oti Mabuse also penned: “Yesssssss CONGRATULATIONS MY HEART. So happy for you”.

Gorka also shared the same picture of his Instagram page, writing: “The best day with my forever Valentine’s.

“I asked and she said YES!!!!!! Happy Valentine’s Day everyone.”

Their engagement comes exactly three years after they first confirmed their relationship on Instagram.

The pair grew close while competing respectively on Strictly Come Dancing in 2017.

In 2019, they welcomed their first child together: a daughter named Mia.

Who is Tej Lalvani, what is the Dragons' Den investor's net worth and what is his company Vitabiotics?