One Direction fans react to a fictional, animated sex scene between Harry Styles and Louis Tomlinson on Euphoria.

On Sunday, the HBO show focused on a fan-fiction writer — played by Barbie Ferreira — who wrote a graphic story about “Larry Stylinson,” the nickname for the imagined, same-sex relationship between the two former bandmates.

In the clip — narrated by Zendaya — a nervous Louis is backstage on the opening night of the Take Me Home Tour.

Suddenly, Harry comes behind him, unzips his pants, gets on his knees, and performs oral sex.

WATCH the NSFW scene (below):

After the clip went viral, Twitter users immediately wondered whether the British singers approved the graphic scene before it aired.

On Monday on social media, while responding to a fan, Louis broke his silence and said he was NOT contacted, nor did he give his blessing for the bit.

“I can categorically say that I was not contacted nor did I approve it.” 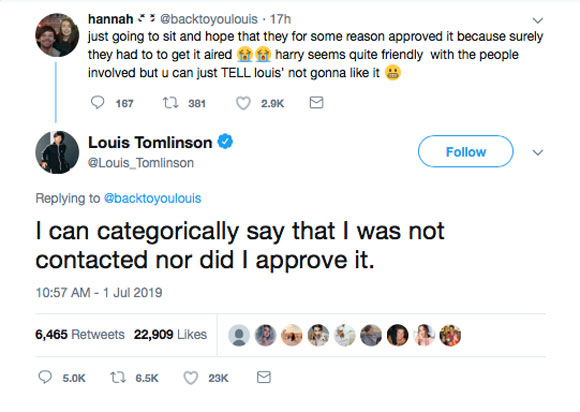 In an interview with The Hollywood Reporter published on Sunday, Ferreira opened up about the controversial scene, exclaiming:

“When I first read the script, that was the first thing that popped out to me, because I can relate to that as a 22-year-old woman who lived through the One Direction age. It’s such a reality for so many people, and so many children and teens that are fans just have this escapist world. You completely give yourself to this persona of a person you don’t even know, or five guys, and imaging the way they interact the escaping from your own reality. It’s really interesting to me because I was definitely a part of that, where I wanted to escape my own life and focus on others because it was easier and felt more meaningful.”

Read all of their reactions (below):

“this whole situation f**king shatters my heart im so mad that this very big tv network would sexualise the two of them on public television without ANY of their consent or knowledge and they had to find out about this through social media , f**k hbo”

“This is so f**ked up honestly not only HBO did this whole sex scene between larry without contacting them. Not only everyone is blaming larries and the worst part is that Louis saw it and it ruined his mood. I’m so mad!”

“Larry scene in #EuphoriaHBO is disrespectful to Louis and Harry, to larries fandom. Fanfictions have to stay inside the fandom, we don’t fooking want it to be on fooking tv.”

“this is not about ship, it is not about what is real or not. it’s about the unnecessary sexualization and exposure they’ve had. louis was polite, didn’t speak at all about larry or larries, just replied that he didn’t know about it. stop using anything to prove a point.”

What do U think??

The Fast 800 Health Journal: Try out these tasty light lunches