Jennifer Lopez is at that stage of her breakup where she doesn’t give AF anymore. After she and Alex Rodriguez denied reports of their split (only for them to be true), we now have confirmation that they’re over. Like, really over.

They announced their split by releasing a statement on April 15:

Well, that’s that. Except not really because there seem to be some hard feelings. J.Lo recently liked an Instagram post about people who pretend to care and fans think it has something to do with A-Rod.

“Don’t make her think you care when you have never given a f*ck about her,” reads the quote shared by author Reuben Holmes, aka r.h. Sin. “Don’t let them manipulate you,” he captioned the post. “How many times have you been told ‘I love you’ by someone who has continued to treat you like sh*t?” 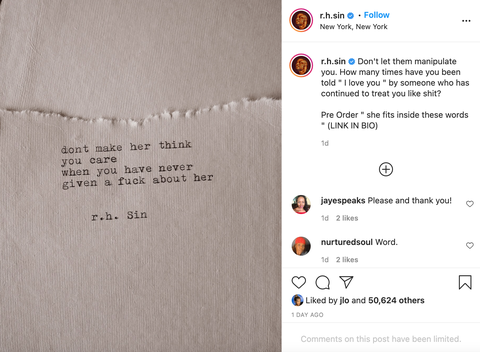 She double tapped on the quote, which has to mean something, right? Yes, it absolutely means something. Their love story took a turn when rumors surfaced that A-Rod cheated with Southern Charm‘s Madison LeCroy. In January, a preview of the Southern Charm reunion aired in which star Craig Conover accused Madison of being a “f*cking homewrecker” after she cheated on his friend, Austen Kroll, by having an affair with an unnamed major league baseball player.

She denied this, ofc, and told Page Six that he “never physically cheated on his fiancée with me.” Ummmm, k? She added that she “talked to him [in a] randomly but not consistent” and “innocent” way. J.Lo and A-Rod issued a statement to TMZ that said “all the reports are inaccurate,” and that they were “working through some things” that had nothing to do with a third party.

They called it quits a month later, hinting that maybe there was some truth to those rumors after all.

You love all the deets on celebs. So do we! Let’s overanalyze them together.