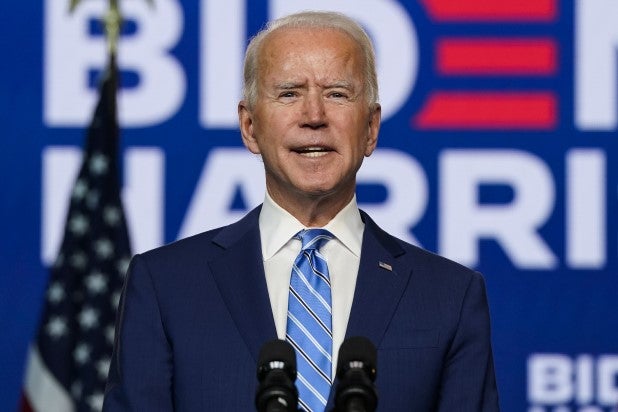 In a speech Friday night, Joe Biden assured his supporters that he is confident of a victory in the still-ongoing 2020 presidential race, telling them “we’re going to win.” Biden also said that in anticipation of that victory, he and his running mate Kamala Harris are already prepping their transition.

In his remarks, delivered just before 11 p.m. on the east coast, Biden noted that “we don’t have a final declaration of victory yet,” but he said, “the numbers tell a clear and convincing story: We are going to win this race.”

Read the rest of his remarks in full below, and watch the speech for yourself at the bottom of the page.

Just look at what has happened since yesterday.

24 hours ago, we were behind in Georgia.

Now we’re ahead and we’re going to win that state.

24 hours ago, we were behind in Pennsylvania.

Now, we’re ahead and we’re going to win that state too.

In fact, our lead just doubled in Nevada.

We’re on track for over 300 Electoral College votes.

And look at the national numbers: We’re going to win this race with a clear majority of the nation behind us.

Let me repeat that: 74 million votes.

That’s more votes than any presidential ticket has gotten in the history of the United States of America, and our vote total is still growing.

We’re beating Donald Trump by over 4 million votes, and that margin is still growing as well.

One of the things I’m especially proud of is how well we’ve done all across America.

We are going to be the first Democrat to win Arizona in 24 years.

We are going to be the first Democrat to win Georgia in 28 years.

And we re-built the Blue Wall in the middle of the country that crumbled just four years ago.

The heartland of this nation.

I know watching these vote tallies on TV move slowly upward can be numbing.

Men and women who exercised their fundamental right to have their voice heard.

And what is becoming clearer each hour is that record numbers of Americans — from all races, faiths, religions — chose change over more of the same.

They have given us a mandate for action on COVID and the economy and climate change and systemic racism.

They made it clear they want the country to come together — not pull apart.

And they spoke loudly for our ticket.

But while we’re waiting for the final results, I want people to know we are not waiting to get to work.

Yesterday, Senator Harris and I held meetings with a group of experts on the public health and economic crises our country is facing.

The pandemic is getting significantly more worrisome all across the country.

Daily cases are skyrocketing, and it is now believed that we could see spikes as high as 200,000 cases in a single day.

The death toll is approaching 240,000 lives lost to this virus.

That’s 240,000 empty chairs at the kitchen and dinner tables across America.

We’ll never be able to measure all the pain, the loss, and the suffering so many families have experienced.

I know how it feels to lose someone you love, and I want them to know they’re not alone.

Our hearts break with you.

And I want everyone to know that on Day One, we are going to put our plan to control this virus
into action.

That can’t save any of the lives that have been lost, but it will save a lot of lives in the months ahead.

Senator Harris and I also heard yesterday about how the recovery is slowing because of the failure to get the pandemic under control.

More than 20 million people are on unemployment. Millions are worried about making rent and putting food on the table.

Our economic plan will put a focus on a path to a strong recovery.

I know tensions can be high after a tough election like we just had.

But we need to remain calm. Patient. And let the process work out as we count all the votes.

We are proving again what we have proved for 244 years in this country.

Your vote will be counted.

I don’t care how hard people try to stop it. I will not let it happen.

The people will be heard and our journey to a more perfect union goes on.

In America we hold strong views and we have strong disagreements.

They’re a sign of vigorous debate, of deeply held views.

But we have to remember: The purpose of our politics isn’t total, unrelenting, unending warfare.

No. The purpose of our politics, the work of the nation, isn’t to fan the flames of conflict — but to solve problems.

To guarantee justice. To give everybody a fair shot. To improve the lives of our people.

We may be opponents — but we are not enemies.

No matter who you voted for, I’m certain of one thing:

The vast majority want to get the vitriol out of our politics. We’re certainly not going to agree on a lot of the issues — but we can at least agree to be civil to one another.

We must put the anger — and the demonization — behind us.

It’s time for us to come together as a nation and heal.

It won’t be easy, but we must try.

That’s the job. It’s called a duty of care. For all Americans.

We have serious problems to deal with — from COVID to our economy to racial justice to the climate.

We don’t have any more time to waste on partisan warfare.

And more than that.

We have such an incredible opportunity to build the future we want for our kids and grandkids.

I’ve said it many times. I’ve never been more optimistic about the future of our nation.

There is no reason we can’t own the 21st Century.

We just need to remember who we are.

This is the United States of America.

And there has never been anything we’ve been unable to do when we’ve done it together.

God bless you. And may God protect our troops.

When is Watership Down on BBC and Netflix and is there a trailer for the miniseries?