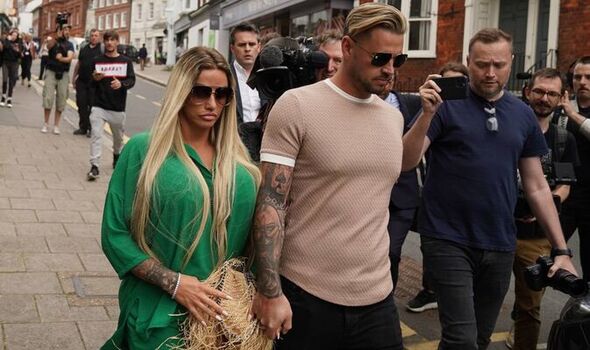 Price, 44, was banned from contacting Kieran Hayler’s new partner Michelle Penticost but she sent a text in which she called her ex’s girlfriend a “******* whore” and a “gutter ****”, a court heard.

The former glamour model had previously pleaded guilty to breaching the five-year order and was warned that she faced a custodial sentence.

But yesterday she was handed an 18-month community order. Judge Stephen Mooney said: “This offence was committed out of anger.

“The words you used were highly offensive and inflammatory so the breach cannot be considered minor.

“Balancing the aggravating and mitigating factors, the appropriate sentence is a medium-level community order.”

Price, who arrived at Lewes Crown Court with fiance Carl Woods, showed no emotion as the public verdict was announced, but she gave a brief smile as she left the dock.

Nicholas Hamblin, defending, said there was “no escape” for people in the public eye, adding: “There’s always something attempting to put a spin on it.”

Hhwa on January 21 this year in relation to access to her children. Mr Hamblin added: “She is having therapy, which is working, and she is not acting impulsively.”

The court was told that Price had shown “clear signs of remorse” and that the messages, while relating to Ms Penticost, were aimed at former partner Mr Hayler.

The star also has a depressive disorder, according to her doctor, and is “learning to cope”.

Mr Hamblin added that between 2019 and 2022 there had been no other issue between the two women and that Price’s guilty plea was “an apology to Ms Penticost”.

She was handed a medium-level community order and ordered to pay £1,500 in costs.

Price has to complete 170 hours of community service within 18 months – this includes 150 hours, plus 20 hours added relating to a separate driving offence.

Dive into swimming-pool blues and ocean hues – no cossie required