Kim Kardashian was just named a billionaire by Forbes thanks to her wildly successful businesses, including SKIMS and KKW Beauty.

Kim Kardashian, 40, is the latest KarJenner to get the “billionaire” title — but she doesn’t think she’ll be the last! The fashion and beauty mogul stepped out for an appearance at the new SKIMS pop-up at The Grove in Los Angeles on Wednesday, April 7, where she revealed who she thinks could be the next family member to hit the financial milestone. After saying she “feels blessed” to TMZ, she noted that “all of them” — including mom Kris Jenner, 65, and sister Kendall Jenner, 25 — could feasibly become billionaires. Kendall is among one of the world’s top paid models and Kris, of course, is the brainchild behind all of the family’s businesses — including her recent venture Safely with Chrissy Teigen.

Kim stunned in a pair of blue-and-beige snakeskin pants for the event, paired with a SKIMS “Fits Everybody” bodysuit in the blue “Arctic” shade. She added a pair of open toe sandals to her ensemble, showing off a summer-ready white pedicure. At one point, her hair stylist was seen coming over to refresh her dark, center-parted locks which were kept in a loose beach wave. She posed for photos in front of the nude colored pop-up kiosk, which is situated outside of The Grove‘s Nordstrom store and designed by Perron-Roettinger. 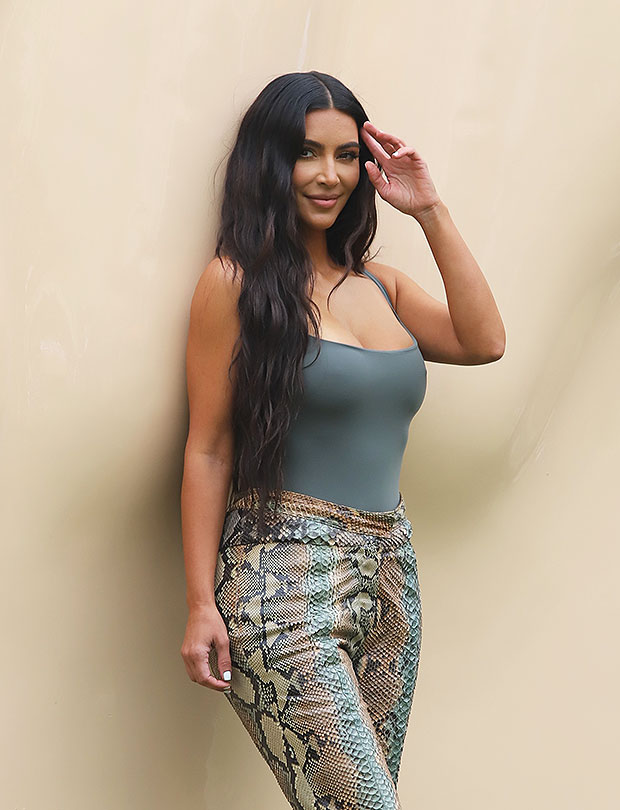 Inside the mini store, rows of boxed product were neatly displayed, along with underwear and other items on hangers. “@KIMKARDASHIAN THIS POP UP IS SO CUTE,” Rumer Willis gushed on social media. An adorable “SKIMS Ice Cream” fridge was also spotted outside, serving up frozen treats from NYC’s Morgenstern’s Finest Ice Cream.

The Keeping Up With The Kardashians star made Forbes‘ coveted World’s Billionaires List on April 5. She can thank both her KKW Beauty and SKIMS brands for the success, as her worth reportedly went from $780 million last October to $1 billion today, according to the publication. More specifically, the mom-of-four raked in the cash when she told 20% of KKW Beauty to cosmetics giant Coty (the same company sister Kylie Jenner sold to), which earned Kim $200 million — leaving her remaining stake worth about $500 million.

While numbers around SKIMS haven’t been officially published, the magazine estimates that the solution and loungewear company is worth over $500 million. The magazine also credits “cash from reality television and endorsement deals, and a number of smaller investments,” that include blue chip stocks in companies like Disney, as well as a real estate portfolio.

Why Queen Elizabeth II Was Accused of Being a Squirrel Killer

Passenger detained after slapping an airline employee with his PHONE