Shortly after news broke of Kobe Bryant‘s death, fans rushed to the Los Angeles Staples Center to pay tribute to the Lakers legend.

One fan, in particular, went viral on Twitter after sharing a touching moment that he shared with his local florist as they both mourned the late 41-year-old basketball superstar, also known as Black Mamba.

“Bought flowers to bring to staples center. When the florist saw that I wanted purple and yellow she asked, “for Kobe?” I nodded. When she finished I asked what I owed her,” wrote Zach Schwartz on Twitter earlier this afternoon. “She shook her head, handed me the flowers and said “it’s LA.” I almost cried.”

This exchange serves as a reminder of the legacy Kobe left behind and the many ways in which he brought the L.A. community together.

Hours later, the florist who helped Shwartz found his tweet thanking her for the kind gesture and she wrote, “You guys this was ME. Had no f-cking idea man. I’m speechless.”

Schwartz then urged his followers to “forward the kindness to her” after she found him on Twitter.

He also shared a photo of the beautiful bouquet of purple and yellow flowers, meant to represent the L.A. Lakers’ colors. 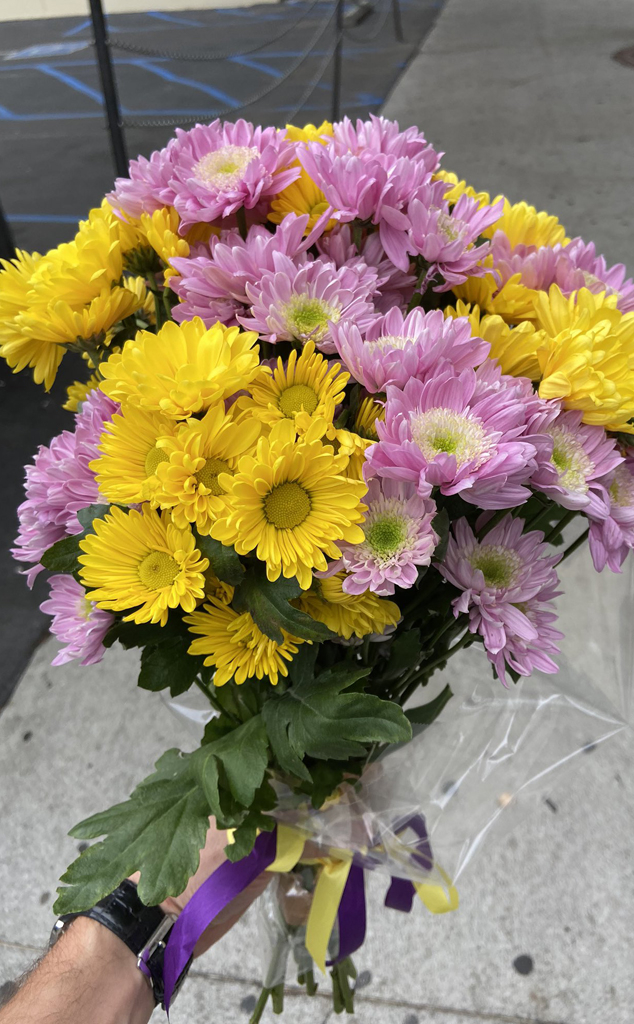 Aside from this special tribute for the late basketball player, the city of L.A. is also honoring Kobe by lighting up Los Angeles City Hall in purple and gold.

Mayor Eric Garcetti took to Twitter to share a picture, writing, “Lights for a legend. Los Angeles City Hall lit in purple and gold starting at 8:24 p.m. this evening in honor of Kobe Bryant’s storied championship career and in memory of Bryant, his daughter, Gianna, and all who perished in today’s tragedy.”

The retired basketball star was also accompanied by his 13-year-old Gianna Bryant, who also died in the accident when his private helicopter crashed into a hillside in Calabasas, California.

Kobe is survived by his wife Vanessa Bryant and his other three daughters, 17-year-old Natalia, 3-year-old Bianka and a 7-month-old baby, Capri.

At a press conference on Sunday afternoon, police confirmed that according to the flight manifest, nine people were on board the aircraft and that there were no survivors. So far, authorities have only named Kobe and his daughter as part of the victims.

The crash remains under investigation.

Anne Hathaway threw away her nonstick pans: ‘I try not to blame myself’