The ‘Keeping Up with the Kardashians’ star has a naughty response after the Blink-182 drummer shared shirtless snaps of himself cuddling his dog and captioned them, ‘Dogs never bite me. Just humans.’

AceShowbiz –Kourtney Kardashian and Travis Barker continued to show off their passionate romance to the world. The “Keeping Up with the Kardashians” star and her musician boyfriend, who recently got a little risque and NSFW on social media, had a racy exchange on his suggestive post.

On Saturday, April 24, the Blink-182 drummer first shared on Instagram some shirtless pictures of himself cuddling his black French bulldog. In the accompaniment of the post, he wrote, “Dogs never bite me. Just humans.”

Travis’ post has since caught the attention of many. One in particular was his reality star girlfriend Kourtney who simply dropped a vampire emoji in the comment section. In response to the reply, the 45-year-old musician sent out an emoji of a drop of blood. 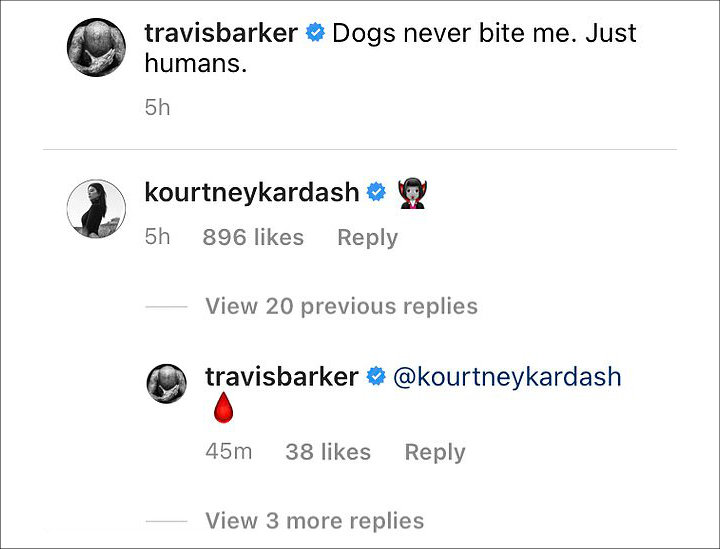 Travis Barker and Kourtney Kardashian had a racy exchange on his suggestive post.

The couple’s flirting came just days after the older sister of Kim Kardashian shared an article about “rough sex” on her Poosh website. In the article, she admitted to being a fan of “the kinky bedroom preference.”

On April 18, Travis celebrated Kourtney’s 42nd birthday by unveiling some NSFW photos and footage on Instagram. His naughty post included some images of them making out and one clip that showed her sucking his thumb before falling back and laughing. “I F****G LOVE YOU! [love] YOU’RE A BLESSING TO THIS WORLD HAPPY BIRTHDAY @kourtneykardash,” so read the accompanying message.

Travis, who confirmed his romance with Kourtney in mid-February, reportedly had permission from her to let out the steamy post. “Their relationship has gotten more serious,” a source told Us Weekly. “Travis’ post on Instagram was just him wanting to let everyone in the world know how crazy he is about her.”

“[Kourtney] doesn’t care anymore about hiding their relationship,” the insider went on. “They love each other very much and their chemistry is off the charts. They’re always showing PDA.”