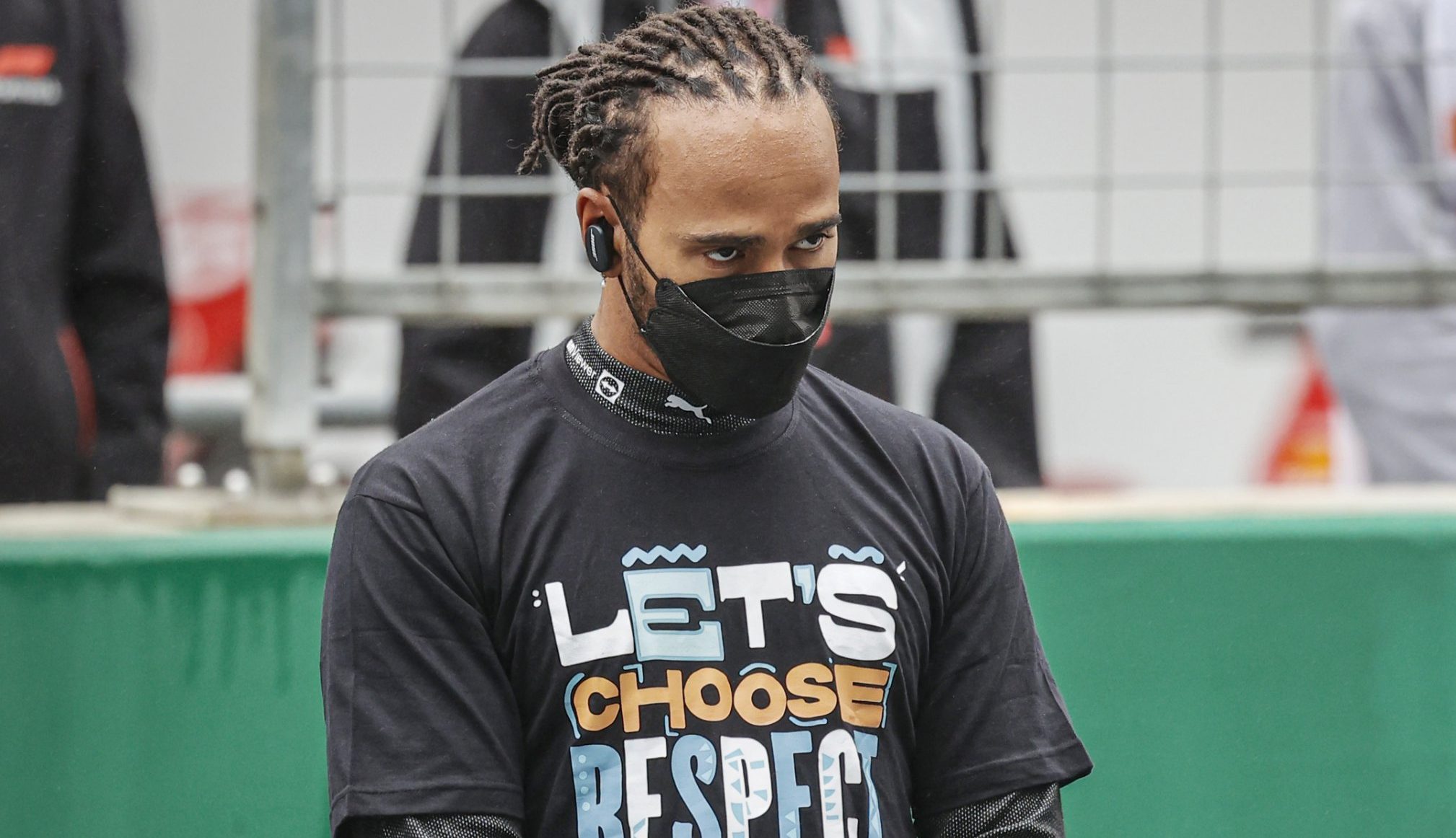 Lewis Hamilton is using his Formula One racing outfits to honour Black History Month in a powerful way.

The racing champion has unapologetically supported the Black Lives Matter movement with his pre and post-race outfits over the past year.

In September 2020, he wore a T-shirt that read: ‘Arrest the cops who killed Breonna Taylor,’ sparking an investigation by the FIA over the political and racial injustice statement.

This month, Lewis has taken it further by enlisting lyricist and spoken word artist George The Poet to write a poem so that he can print one line on each T-shirt over the course of October for Black History Month.

In fact, it’s actually something he has executed throughout the current Grand Prix season.

Announcing the heartfelt gesture, the 36-year-old wrote in an Instagram post: ‘To mark Black History Month, I wanted to share you on a project I’ve been working on with a talented group of artists since the beginning of the season…

‘@georgethepoet and I wrote a poem that invites open mindedness in respecting the experience of others. Each race weekend, I’ve been wearing a line of the poem on a tee designed by a rising artist of colour.’

One line of the poem reads: ‘When will we change?’

Calling for unity, one line reads: ‘We Breathe the same air. Let’s fight the same fight.’

At the Turkish Grand Prix on October 10, he wore a black T-shirt with the words: ‘Let’s choose respect,’ and several hands with different skin tones raised in a defiant pose.

He then teased: ‘Keep your eyes out for the full poem coming together across the remaining tees of the season.’

George The Poet, real name George Mpanga, revealed how the collaboration came about: ‘Earlier this year, Lewis hit me up and was like, “Bro, I feel so strongly about improving Black life, raising awareness of racism, I’m doing whatever I can”. And he is, you can Google whatever he’s doing – but listen to my story of why he’s a real one.

‘He said to me, “George I would like for you to write with me a poem about anti-racism and this is what I’m going to do, after every single race, I’m wearing a T-shirt, with a line of your poem specially designed by a Black creative”.

‘Look back on the Formula One season and you’re gonna see that he’s a man of his word. He’s been wearing a T-shirt with a line of my poem every single race. It’s been like 16 races this season so far, five wins, you already know he’s the greatest driver of all time. Big up Lewis Hamilton, he is a real one.’