Meghan Markle gave birth in the early hours of the morning on May 6, before announcing it mid-afternoon.

In the wake of the new arrival, The Duke and Duchess of Sussex have received floods of well-wishes, including from Meghan’s Suits co-stars.

One of the first to share the good news to his Twitter was her on-screen husband, Patrick J Adams, who plays Mike Ross in the popular TV series where Meghan plays Rachel Zane.

As he shared his joy to Twitter, teased the pair will be reuniting as their children get together for a play date.

“Much love to him and his incredible parents”

Gushing over the news, he wrote: “Just heard that the world just got heavier by 7 pounds and 3 ounces.

“Much love to him and his incredible parents.”

He added: “Learned first hand 7 months ago how transformation becoming a parent is and couldn’t be happier for Meghan and Harry as they begin this adventure #playdatesoon.”

Fans quickly gushed over the thought of Meghan reuniting with Patrick after she left the popular TV show. 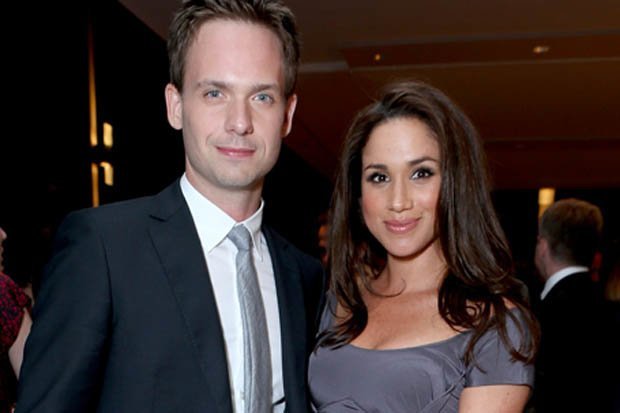 One user wrote: “I love how supportive you are to each other.”

While another added: “Is it just me who’s hoping she names him Mike?”

His hopes for a playdate comes months after he welcomed his daughter into the world with wife Troian Bellisario.

The pair kept the pregnancy secret up until Troian gave birth, and went on to reveal Troian was pregnant while the pair were at the royal wedding.

Meghan and Patrick worked together from 2011 to 2017 before the pair both left the show after getting married on screen.

It was announced earlier today Meghan gave birth to a baby boy, though the Duke and Duchess of Sussex are yet to reveal the name of their baby.