Home » Michael B. Jordan Sizzles In Shirtless Photo As He Goes For A Dip In St. Bart’s — See Pic

Michael B. Jordan is showing off his buff body in new photos from St. Bart’s, where he previously vacationed with GF Lori Harvey.

Michael B. Jordan is back in St. Bart’s, but unlike his Jan. 2021 yachting getaway there with girlfriend Lori Harvey, 24, this time it was all about business. But what a gorgeous workplace setting the Black Panther star had, as he was doing a photoshoot for Men’s Health on the Caribbean island. In an Apr. 16 Instagram photo, he showed why the magazine would want to do a piece on him, as the 34-year-old shared a snapshot of himself shirtless and looking so sexy while emerging from a pool.

Michael used the shot to thank Airbnb for comping his lux accommodations in St. Bart’s. His hillside villa overlooked the turquoise water in the distance, as well as other homes in the bay. The Creed star wore a pair of light blue trunks as he grabbed the metal railings on the pool ladder. Michael’s ripped abs, perfect pecs and bulging biceps were on display in the shirtless photo, as the mustachioed star gave a steely look off camera.

Michael included two videos that followed, with one showing a gorgeous 180 view from the pool at sunset. He swung his camera across the mountains and the small bay his home was situated in with the open sea beyond it. In another video, he showed what his morning breakfast view looked like as he at a plate of scrambled eggs and a glass of orange juice. The gorgeous pool was right in front of his floor to ceiling dining room window, with the bay and swaying palm fronds beyond it. 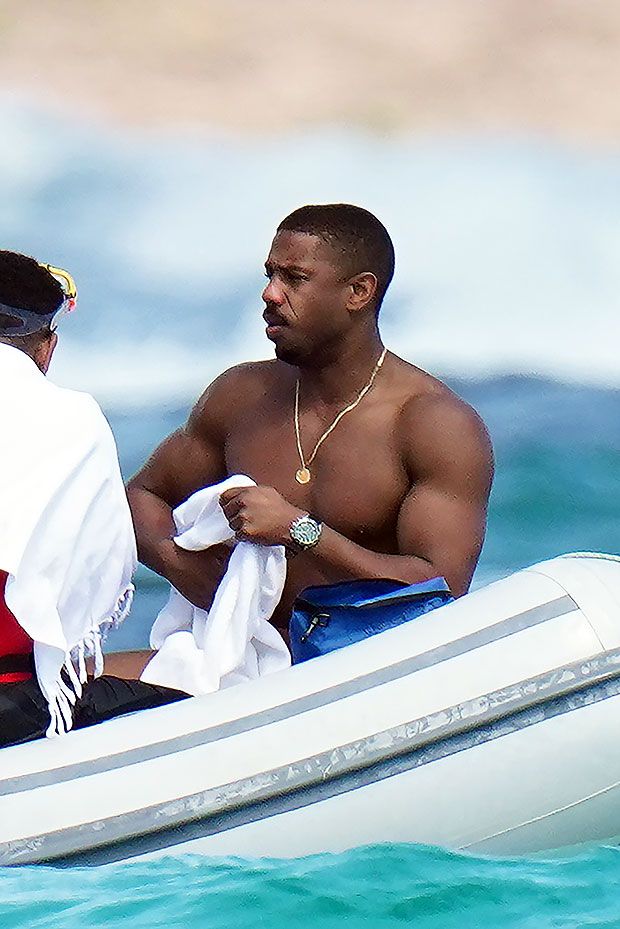 “Thanks @airbnb for comping the crib in St. Barths for my Men’s Health Shoot. The host took care of me & the crew & made the trip one to remember,” the 2020 Sexiest Man Alive wrote in the caption. But his celebrity friends and fans were giving him thanks for the shirtless pool photo. Michael’s girlfriend of nearly six months Lori left a series of smiling emojis with hearts for eyes. His Black Panther co-star Lupita Nyong’o gushed, “Yes please!” in the comments. Actor Jamie Foxx called the post and the accommodations, “King S#%t. Well deserved.”

Michael was last in St. Bart’s in Jan. 2021, while on vacation with Lori, her mom Marjorie and her step dad, Family Feud host Steve Harvey. He has the 64-year-old comedian’s stamp of approval, as Michael was at Lori’s family’s 24th birthday festivities for her on Jan. 13 at a Utah ski resort, then the couple and her parents headed to St. Barts to get out of the snow and into the tropical sunshine. The couple packed on plenty of PDA while aboard the yacht, and from Lori’s flirty message in the comments of his new post, things are still going strong for the insanely good looking couple.