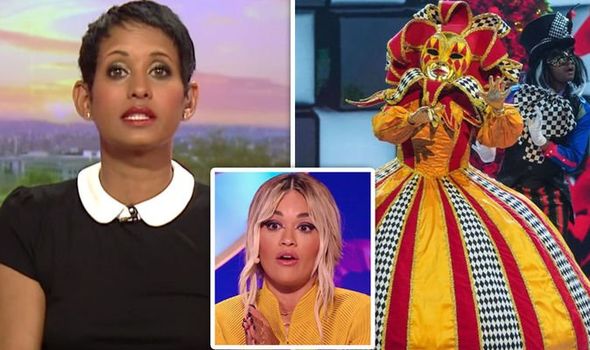 Naga Munchetty, 45, has spoken out after Davina McCall, 53, shared her guess the BBC Breakfast presenter could be the singing voice behind the mysterious Harlequin on the ITV show.

The presenter broke her silence on the rumours while hosting her BBC Radio 5 Live show today.

Naga played a clip of Harlequin belting out a tune from Saturday night’s show and proceeded to hit back at judge Rita Ora’s claim that the voice couldn’t possibly be from a breakfast TV presenter.

The host declared while addressing Harlequin’s vocals: “The panel of judges took a little bit of deliberation and Harlequin was asked to give a few clues about who Harlequin is.

Before Rita chimed: “There’s no way that voice is breakfast news.”

Naga responded by saying: “I don’t know who that voice was saying, ‘There’s no way that could be a breakfast news host.”

“But hmmm,” the star grumpily commented.

KFC's WOW Box is back and you can get a burger, chicken and fries for £3.50 – more than half price