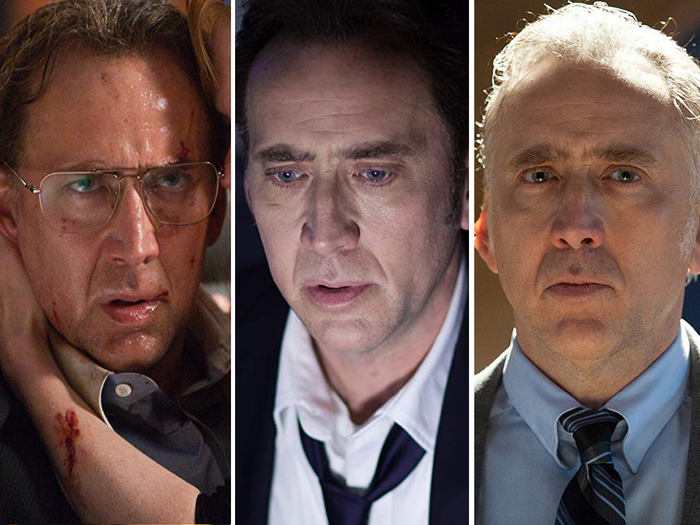 Known for his work in thrillers like "Face/Off" (1997) and adventure films like "National Treasure" (2004), Nicolas Cage has made a name for himself in many genres by starring in over 100 films.

But with a career spanning the course of multiple decades, it's no surprise that not all of his pictures have been received well by critics.

Here are the 10 best and 10 worst films that Nicolas Cage has starred in, ranked by critical scores on Rotten Tomatoes:

Note: Films without critical ratings were not included. All scores were current on the date of publication and are subject to change.

The actor's highest-rated film is "Spider-Man: Into the Spiderverse" (2010), in which he voiced Spider-Man Noir. 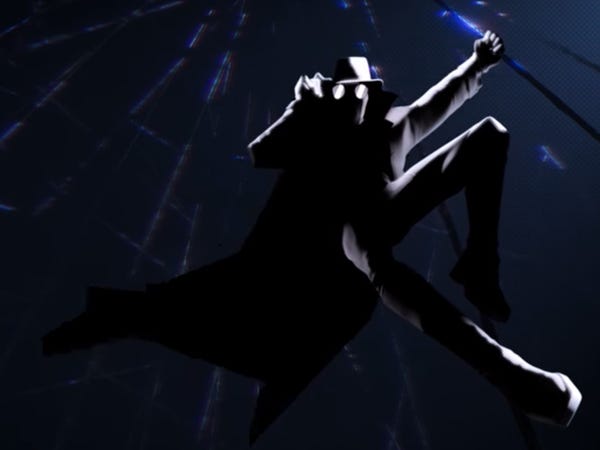 When multiple versions of Spider-Man (voiced by Jake Johnson, Cage, Hailee Steinfeld, and more) are pulled from other universes, they try to show Miles what it means to be a hero.

Critics loved "Spider-Man: Into the Spiderverse" for its moving story and unique animation design.

"The delights of 'Spider-Man: Into the Spider-Verse' bring a newfound sense of joy and playfulness to the beloved character," wrote Katie Walsh for the Tribune News Service. 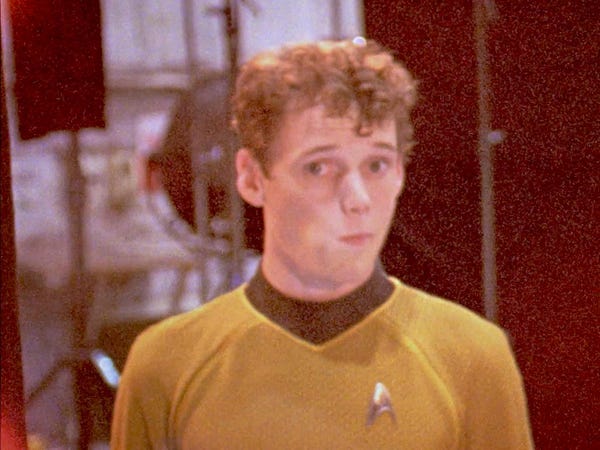 Summary: The documentary "Love, Antosha" explores the unexpected death of Anton Yelchin and his legacy as a young actor and artist.

Cage's voice was featured in the documentary to narrate Yelchin's personal diaries.

The nature of the documentary hit home for a lot of reviewers, who found the film to be a warm and fitting tribute to a man of boundless talent.

"Mostly, the Antosha of 'Love, Antosha' seems like a good kid: someone whose life — and tragic death — should inspire us to spend our brief time here as wisely and as well as he did," Pat Padua wrote for The Washington Post. 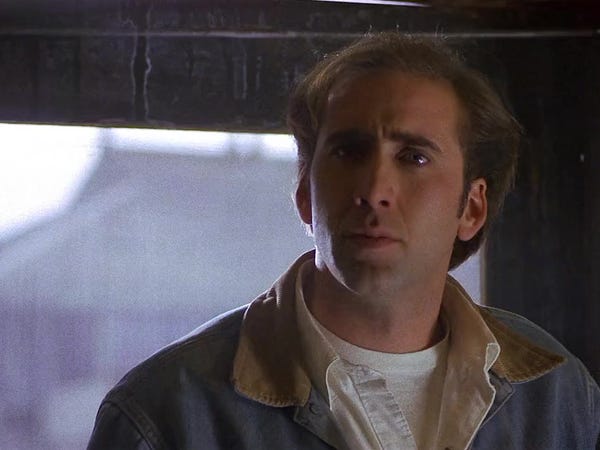 Summary: In the dramatic thriller "Red Rock West," wandering Texan Michael Williams (Cage) is mistaken for a professional hitman by a tavern owner. Happy to just take the money and get out of town, Michael soon comes face-to-face with the real hitman.

"It's well worth tracking down, wherever you can find it. For it has the kind of tension and energy — maybe even a touch of delirium — that is only a memory in most of today's big studio movies," wrote Richard Schickel for Time magazine. 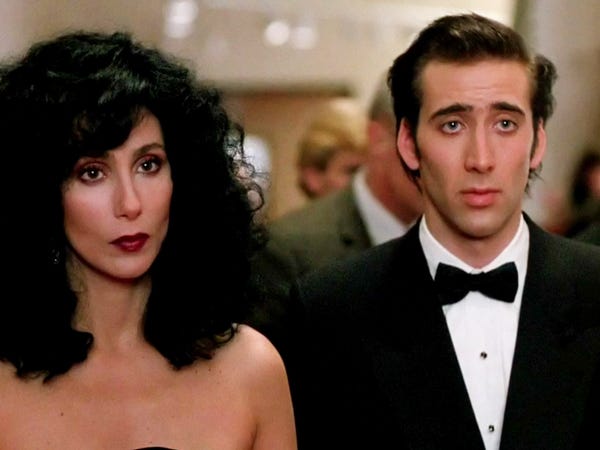 Despite her mother's advice to marry someone she doesn't love, Loretta can't stop thinking about Ronny.

"Moonstruck" was called an unforgettable movie-going experience for most critics, who felt that it had just the right amount of humor and heart.

"There's an old-fashioned romanticism about the picture, a sweet, gentle approach to love and family life," wrote Jay Boyar for the Orlando Sentinel. "But this is kept from seeming sappy by the picture's tough-minded, almost abrasive sense of humor." 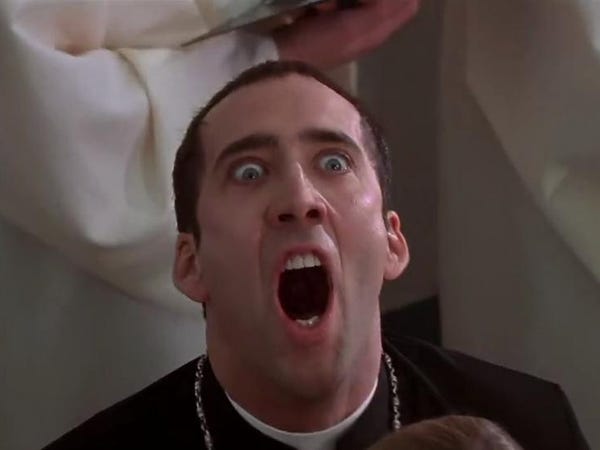 Through an experimental surgery, Archer adopts Troy's likeness to go undercover and find the position of a bomb he has placed in the city. Little does he know, Troy is about to take on Archer's appearance as well.

Critics enjoyed "Face/Off" for its high stakes plotting and praised the way Cage and Travolta embodied their roles.

The actor played Charlie and Donald Kaufman in "Adaptation" (2002). 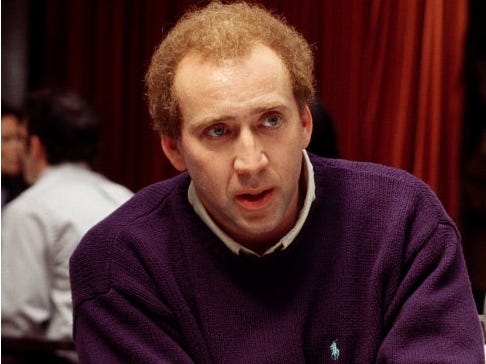 Summary: In the comedic drama "Adaptation," screenwriter Charlie Kaufman (Cage) attempts to make headway on his next film script, while he's plagued by his annoying twin brother Donald (Cage) and a nasty case of writer's block.

Their relationship grows more complicated when Donald moves in with Charlie and tells him he's going to become a screenwriter too.

"Adaptation" was a critical success, with reviewers pinpointing the creativity of the script and Spike Jonze's unique vision as the film's highlights.

"The author of 'Being John Malkovich' takes us on a manic journey through the hazards of being true to yourself while being successful," wrote Wesley Lovell for Cinema Sight. "Streep, Cage and Cooper are terrific." 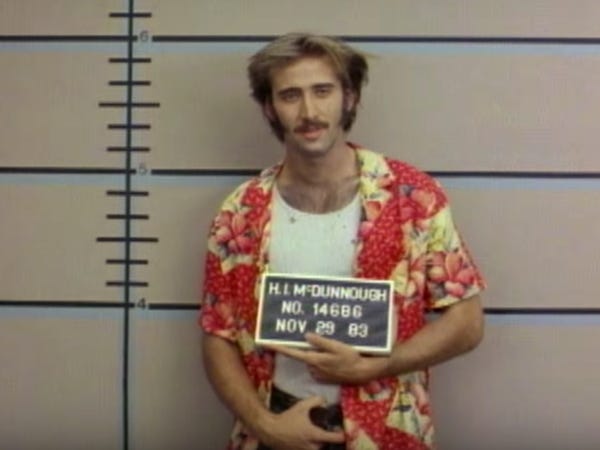 Summary: "Raising Arizona" is an action-adventure comedy in which reformed criminal H.I. McDonnough (Cage) and his wife Ed (Holly Hunter) realize they're unable to bear children.

When a local family gives birth to quintuplets, Ed pressures H.I. to kidnap one of the children so that they can raise a child of their own.

"Raising Arizona" garnered critical acclaim for Joel and Ethan Coen's singular directing style and the performances of the high-profile cast.

"Starting from a point of delirious excess, the film leaps into dark and virtually uncharted territory to soar like a comet," wrote Time Out critic Geoff Andrew. 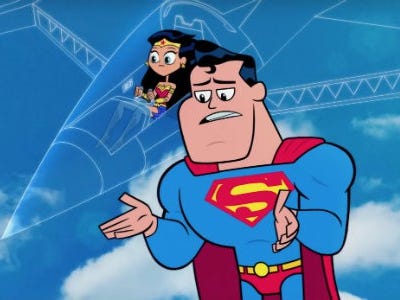 Summary: A spin-off of the animated television series, "Teen Titans Go! To the Movies" follows Beast Boy, Robin, Cyborg, Raven, and Starfire as they try to make it big in Hollywood.

In the film, Cage lent his voice as Superman, a hero that inspires the team of teens.

Critics felt that "Teen Titans Go! To The Movies" had the right mixture of heart, humor, and silliness.

"While the kids at the screening I attended laughed hysterically at the fart jokes, the parents chuckled at the slightly more sophisticated humour and the adult geeks howled at the deeper pop cultural references," wrote Marsha Lederman in her review for Globe and Mail. 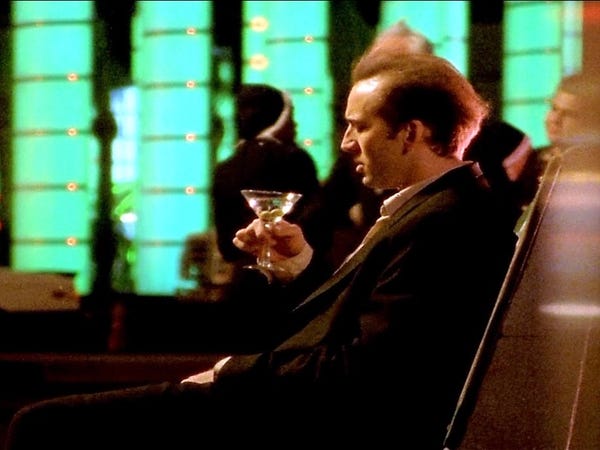 Summary: In "Leaving Las Vegas," struggling screenwriter Ben (Cage) falls for a prostitute named Sera (Elisabeth Shue). Consumed by his addiction to alcohol, Ben makes Sera swear that she will never ask him to quit drinking, a promise that becomes harder for her to keep as she develops feelings for him.

"Dark and giddy at the same time, 'Leaving Las Vegas' takes us into dreamy, intoxicated places no movie about an alcoholic has gone before," wrote Owen Gleiberman for Entertainment Weekly. 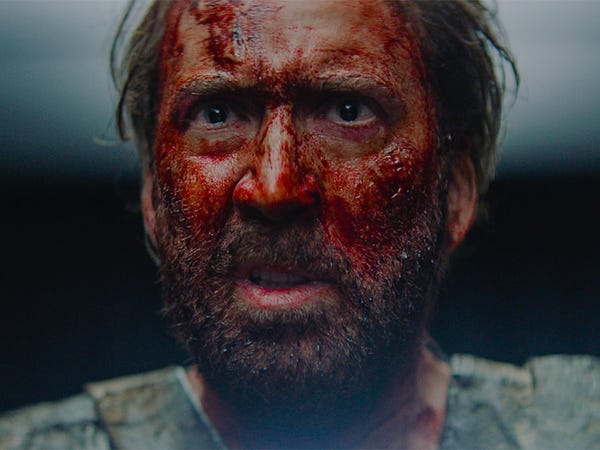 Summary: In the revenge thriller "Mandy," Red Miller (Cage) and Mandy Bloom (Andrea Riseborough) lead a peaceful life on the outskirts of the Pacific Northwest until a violent cult enters their lives and sets Red on a path towards redemption.

The suspense thriller "Mandy" took a lot of reviewers by surprise, leaving them stunned by the electric nature of the film and Cage's riveting central performance.

"Fans of [Cage's] work will relish his extravagantly oddball performance as a dark avenger in this luridly overwrought horror movie," wrote Geoffrey Macnab in his review for The Independent. 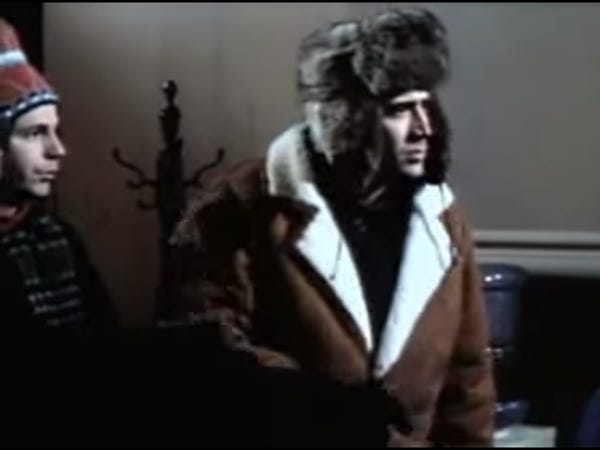 Summary: After being released from prison, Bill Firpo (Cage) is pressured by his criminal brothers Dave (Jon Lovitz) and Alvin (Dana Carvey) to return to a life of crime. Following a bank heist, the trio of brothers soon find themselves snowed in at a small suburb in Pennsylvania.

Critics had little to praise after watching "Trapped in Paradise," calling it a humorless holiday flick with a dragging pace.

"Considering that there isn't a single laugh in the whole picture, the term 'comedy' must be used loosely," wrote Hal Hinson for The Washington Post. 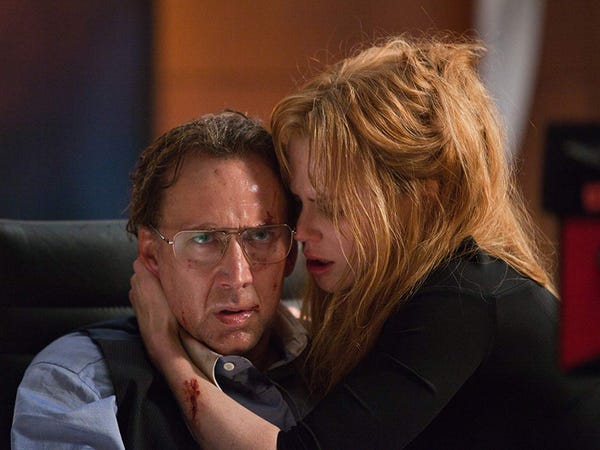 Summary: In the drama "Trespass," diamond merchant Kyler Miller (Cage) and his wife Sarah (Nicole Kidman) live peacefully in the woods until their house is invaded by a pair of thieves masquerading as local police officers.

"Trespass" was slammed by critics who thought that the plot points were too predictable and the acting performances were unredeemable.

"Cage performs with the conviction that comes from a long experience in bad movies. But Kidman seems totally uninterested," wrote Derek Malcolm in his review for the London Evening Standard. 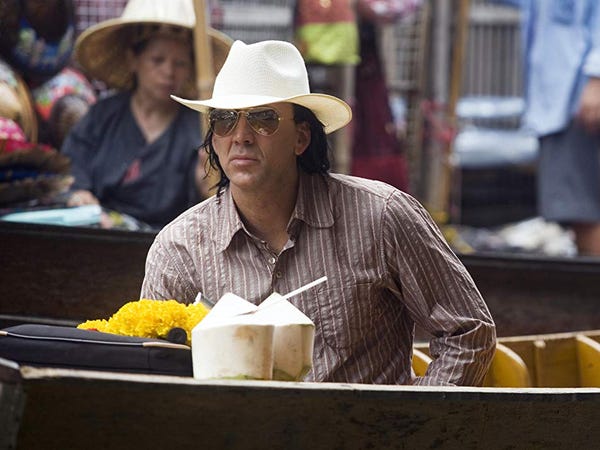 Summary: In the crime thriller "Bangkok Dangerous," a legendary assassin named Joe (Cage) is enlisted by a crime boss (Nirattisai Kaljaruek) to complete a series of kills and finish the job by taking out a young teenager that helps him along the way.

Reception for "Bangkok Dangerous" was riddled with negative reviews, with critics calling the film dull and lifeless.

"While the film includes several exciting, creatively shot action scenes, the drama is otherwise so shopworn that the violent climax is a relief," wrote Chicago Reader critic Joshua Katzman. 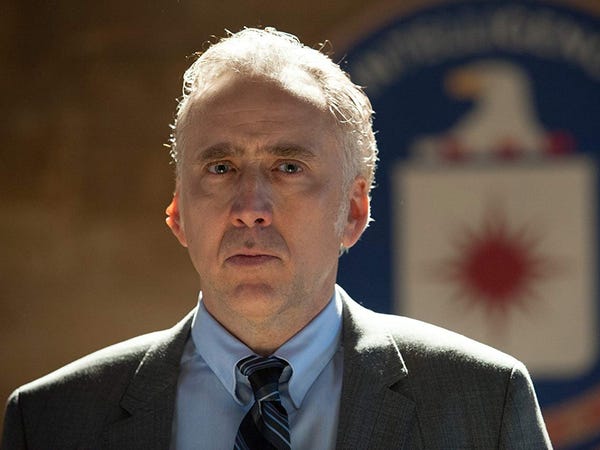 Summary: "Dying of the Light" is a dramatic thriller in which a terminally ill CIA agent named Evan Lake (Cage) is forced into retirement early. He soon rejoins the force after his enemy (Alexander Karim) resurfaces after lying dormant for years.

"Dying of the Light" was poorly received by critics who felt that it was overwritten, messy drama.

"'Dying of the Light' is a shrill and bombastic slog, with an all-over-the-map collection of tones that never cohere into a credible or compelling vision," wrote Roger Ebert critic Matt Zoller Seitz.

In the adventure film "Outcast" (2014) Cage played a warrior. 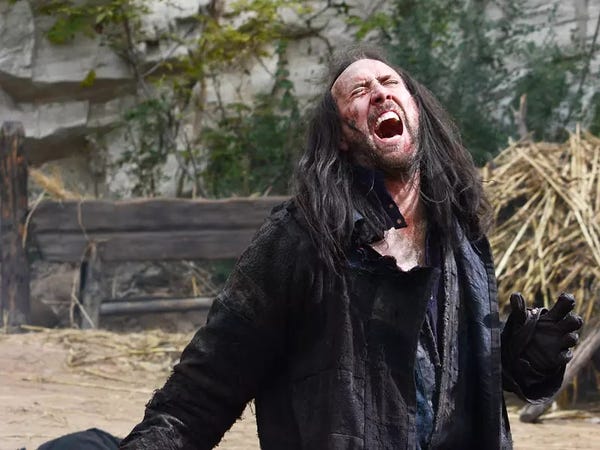 Summary: In the fantasy adventure drama "Outcast," a warrior named Gallain (Cage) pairs up with the children of a dethroned Chinese ruler in an attempt to help them overthrow their tyrant brother.

Critics found the drama to be a tough slog to sit through, criticizing "Outcast" for its shallow story and lack of fleshed-out characters. 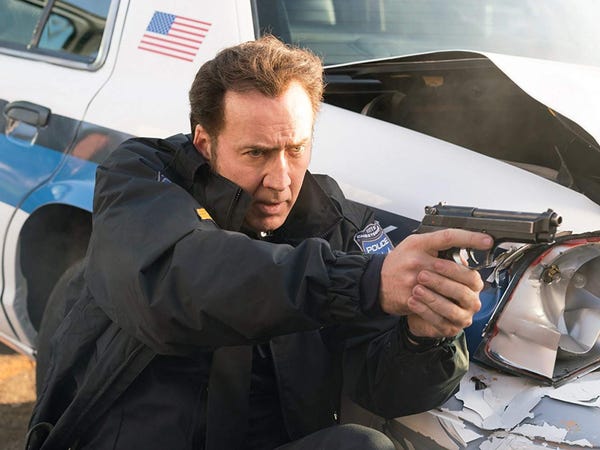 Summary: The suspense-filled drama "211" centers around police officer Mike Chandler (Cage) and a young civilian who find themselves in over their heads in the midst of a bank heist. Low on resources and without back-up, Chandler tries to take the criminals head-on.

Critical reception for "211" was overwhelmingly negative due to the film's formulaic plot and a cast that largely seemed checked out. 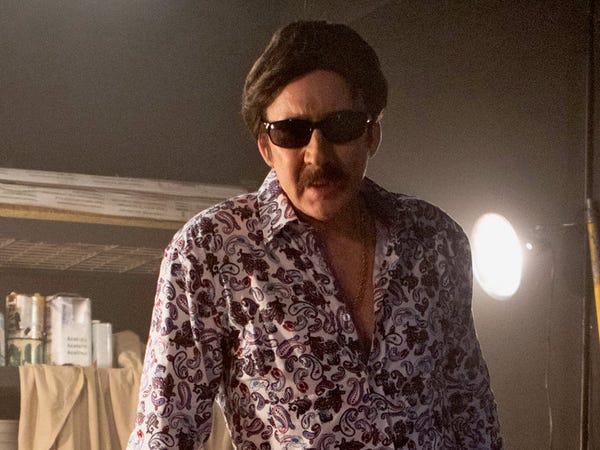 Summary: In the action-filled thriller "Arsenal," brothers Mikey (Johnathon Schaech) and JP Lindel (Adrian Grenier) have always relied on each other. When Mikey is kidnapped and held hostage by mob boss Eddie King (Cage), his brother JP turns to a detective for help.

"Arsenal" was derided by film critics who took fault with the movie's haphazard assembly and Cage's over-the-top performance.

"Nicolas Cage delivers one of his all too frequent cringe-making, extra-screamy, dial-a-psycho performances in this ultra-violent Southern noir," wrote Time critic Kevin Maher. 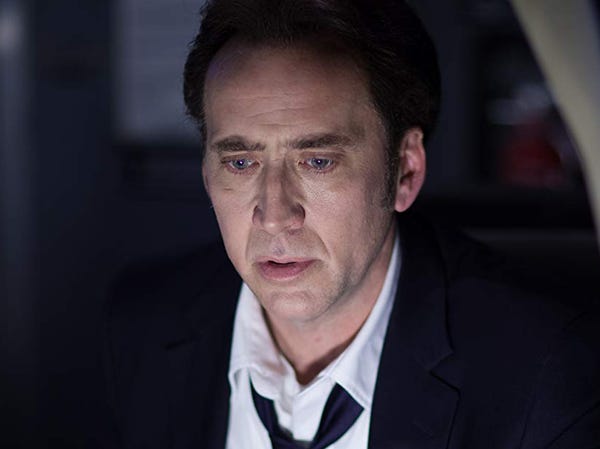 Summary: In the fantastical drama "Left Behind," millions of people disappear from the face of the Earth without notice.

Amidst the chaos, airline pilot Ray Steele (Cage) tries to save the lives of the passengers remaining on his flight.

"Left Behind" was dragged by critics who said the movie was nonsensical and bordered on unwatchable at times.

"It believes people might buy a ticket to 'Left Behind' and not know the twist, like someone sitting down to watch Godzilla and being shocked by the entrance of a giant lizard," wrote Amy Nicholson in her review for LA Weekly. 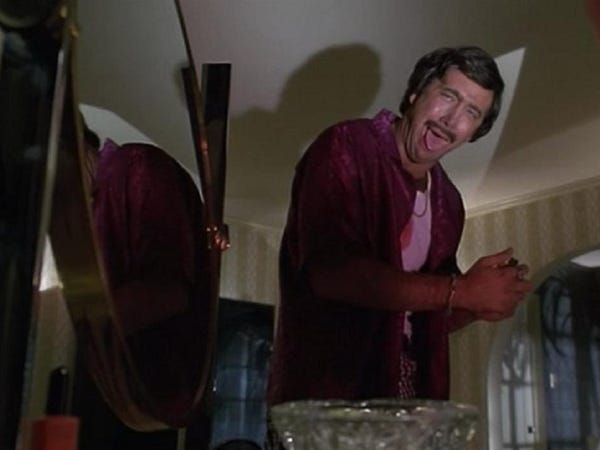 Summary: "Deadfall" is a crime drama about a New Yorker (Michael Biehn) who loses his con-man father and travels across the country to find his father's identical twin in an effort to complete a sting operation.

Cage appeared in the film as Eddie King, a character he would later reprise in "Arsenal" (2017).

Critical reception for "Deadfall" was abysmal, with critics saying the movie was shallow and poorly produced.

In his review for Variety, Ken Eisner simply wrote that "Deadfall" was "watchable only for camp value." 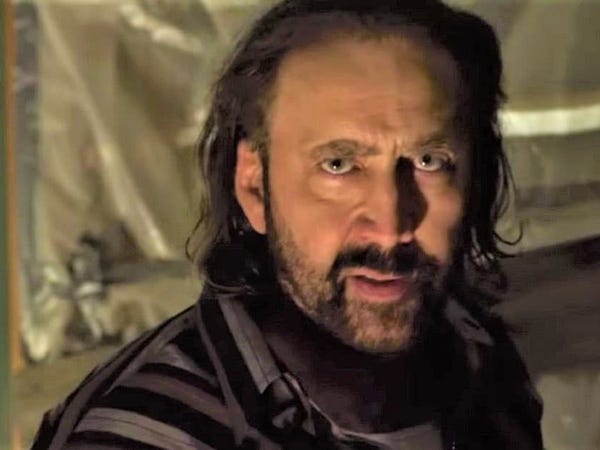 Summary: In the action-packed thriller "Grand Isle," a young father named Walter (Cage) is arrested and charged for a murder he swears he didn't commit.

Currently listed as Cage's lowest-rated film on Rotten Tomatoes, "Grand Isle" was panned for its incoherent plot and tedious pace.

"It is disappointing that this flimsy B-movie isn't better, because once it sets up its formulaic plot, it could have been both naughty and wild," wrote Gary M. Kramer for Salon.

Men are less likely to wear face masks because they’re a sign of weakness, study finds – The Sun