Pete Davidson and Phoebe Dynevor are officially a couple.

The “Saturday Night Live” star, 27, and the “Bridgerton” actress, 26, confirmed their relationship in new PDA-filled pics published by the Daily Mail. They were spotted out in Stoke-on-Trent, England, on Sunday.

Dynevor and Davidson were photographed on a walk together through the countryside where they embraced each other and laughed.

They were also snapped going into a grocery store together masked up.

In early April, the comedian hinted he was dating the British star. During a Zoom call with Marquette University students, Davidson implied that he has a new love interest. 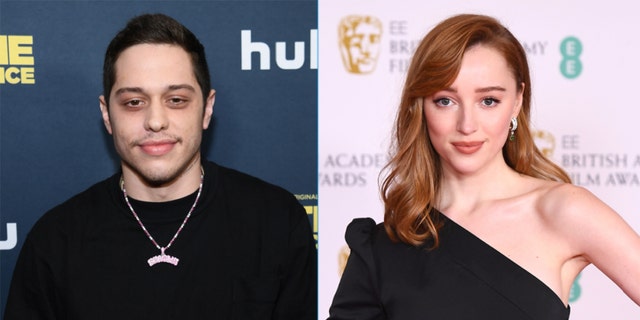 Pete Davidson (L) and Phoebe Dynevor (R) were spotted in England together over the weekend.
(Jeff Spicer/Getty Images)

“That is all I can speak on,” he added with a smile.

In March, Davidson and Dynevor were reportedly spotted in both England and Brooklyn, New York because the actress was filming a guest spot on “Younger.”

“It looked like they were in a relationship and they seemed happy together,” said a witness who allegedly saw them holding hands.

Dynevor is currently filming the second season of “Bridgerton” in England.

Juan Pablo Galavis Implies Clare Crawley 'Can't Get Over' Him

Helen Skelton: ‘A real eye opener’ – Presenter opens up on case close to her heart