Some journalists at The Philadelphia Inquirer are refusing to work on Thursday and posting an open letter about systemic racism after the publication ran an offensive headline playing on the phrase Black Lives Matter.

A column about police protests and city architecture in Wednesday’s print edition ran with the headline “Buildings Matter, Too” — equating the vandalism of inanimate objects with violence against Black Americans.

Editors issued an apology for the headline, but many of the paper’s infuriated journalists have started a protest of their own.

As of Thursday morning, more than 40 staffers of color had signed onto an open letter to the paper’s leadership about systemic racism ― not just in America, but in journalism. According to one employee, more than 30 of those staffers are declining to work for the day, and another seven are carrying out a “byline strike,” meaning they are working but will refuse to have their names on any stories.

The group includes reporters, editors, social media editors, photographers and designers. Some, but not all, are members of the NewsGuild union. 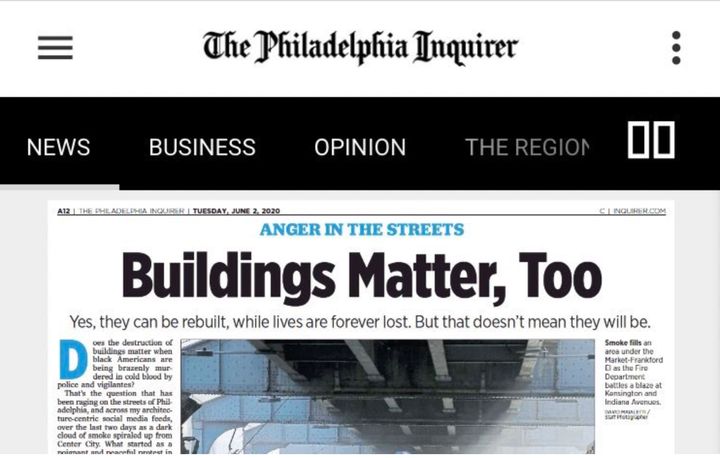 The letter makes clear that employees’ grievances go far beyond the botched headline. Diversity has been a problem for newsrooms across the country ― in both staffing and coverage ― with predominantly white leadership still at the top of mastheads.

The letter shows the “Buildings Matter, Too” embarrassment was merely an indicator of deeper issues at the storied paper.

“We’re tired of hasty apologies and silent corrections when someone screws up. We’re tired of workshops and worksheets and diversity panels,” they wrote. “We’re tired of working for months and years to gain the trust of our communities — communities that have long had good reason to not trust our profession — only to see that trust eroded in an instant by careless, unempathetic decisions.”

The full letter can be read here.

The journalists posted the letter internally on Slack on Wednesday. It included staffers’ names, but they have kept their names off the public version.

According to the employee HuffPost spoke to, an editor responded to the letter in Slack by saying they would donate their own paid time off to any journalists of color who lost a paid day off to protest. More than 60 other staffers went on to make the same offer.

Several employees of the paper took to Twitter Wednesday night to air their frustrations:

Cassie Owens, a reporter at the paper, said many staffers were “exhausted”:

Lisa Hughes, the newspaper’s publisher, issued a statement to staff on Wednesday night, saying no one would be charged a day off if they declined to work. She also acknowledged that the “Buildings Matter, Too” headline “highlights a systemic failure that we have to address.”

“As the first female publisher in the 190-year history of The Inquirer, I can tell you firsthand that we have been too slow to change to reflect the community we serve, not only in the newsroom but across the entire organization,” Hughes wrote. “Since my arrival in February, I have all too often heard stories of hurt, anger and frustration at not being heard, and even worse — years of empty platitudes with little action. You are right. We need to do better, and we will do so together.”

Hughes said it would take “hard work, honest dialogue and accountability” to bring about lasting change at the paper.

This is a developing story. Please check back for updates.