Rachel Riley, 34, has been a firm fixture on 8 Out of 10 Cats Does Countdown alongside Jimmy Carr, 47, since 2012. The Countdown favourite took to Twitter and unveiled a cheeky discovery she shared with her 667,000 followers.

The mum-of-one revealed her pal’s daughter had been busy during lockdown growing her own vegetables.

But Rachel appeared taken aback when she shared a photo of the homegrown carrots as talked about their peculiar shape while referencing the inkblot test.

The mathematician penned: “My friend’s little girl has grown her own carrots.

“The vegetable equivalent of the inkblot test tells me I’ve definitely been working with Jimmy Carr too long.” 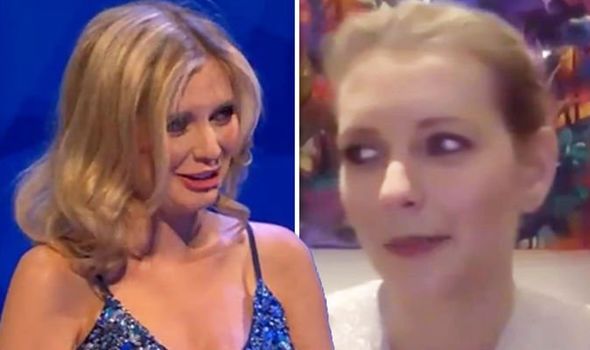 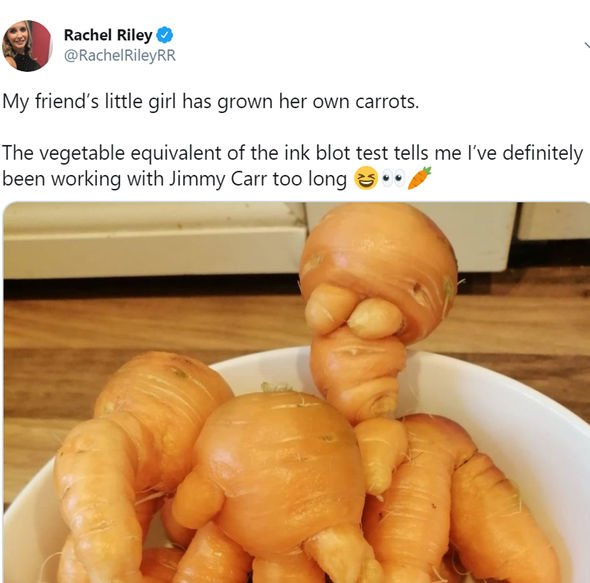 The inkblot test is frequently portrayed as a way of revealing a person’s unconscious thoughts, motives, or desires.

It derived from the famous Rorschach inkblot test in which respondents are asked to look at ambiguous inkblot images and then describe what they see.

One person said: “Good on her, if she had watered them more they would probably have grown carrot shaped. But that’s boring and not nearly as much fun.”

“I think I’ve watched too much 8 Out of 10 Cats Does Countdown because I’m seeing the same thing you must be seeing,” another person quipped.

While a third person added: “He can be a bit of a wonky carrot at times, but heck is he funny!” (sic)

The mum-of-one took to the micro-blogging site and shared a sweet photo of her baby daughter chuckling alongside a dog.

Fans flocked to comment on the post, as one person said: “Aww cute nice Bedlington too! x #NationalDogDay.”

The TV star, who wed her long-term partner and ex-Strictly Come Dancing star Pasha Kovalev in Las Vegas in 2019, welcomed their first child Maven in December.

More recently, Rachel caused a stir with a pregnancy photo as fans quizzed if she was expecting again.

In the photo, she could be seen sporting a rounder belly than usual.

But before fans could even utter the question of whether she is expecting again, Rachel dismissed the idea.

“Brand new series! @8Outof10Cats does @C4Countdown starts tonight, 9pm @Channel4. And no, before you ask, I’m not pregnant again,” she wrote.

8 Out Of 10 Cats Does Countdown airs Friday at 9pm on Channel 4.

George Clooney Wears a Mask in L.A., Plus Michael B. Jordan, Uma Thurman and More

Amazon Tells Customers Their Info Was Exposed Due to ‘Technical Error’