Renée Zellweger and Kenny Chesney took the world by surprise when they got married in May 2005 after knowing each other for five months. But it was perhaps even more surprising when the two decided to have the marriage annulled just four months later—with the Judy actress citing “fraud” as the reason.

Renée and Kenny’s shocking split and their decision to mark “fraud” on the documents sparked false tabloid rumors about Kenny’s sexual orientation. Two years later, during a 60 Minutes sit-down interview with Anderson Cooper, the country music star denied that he is gay. 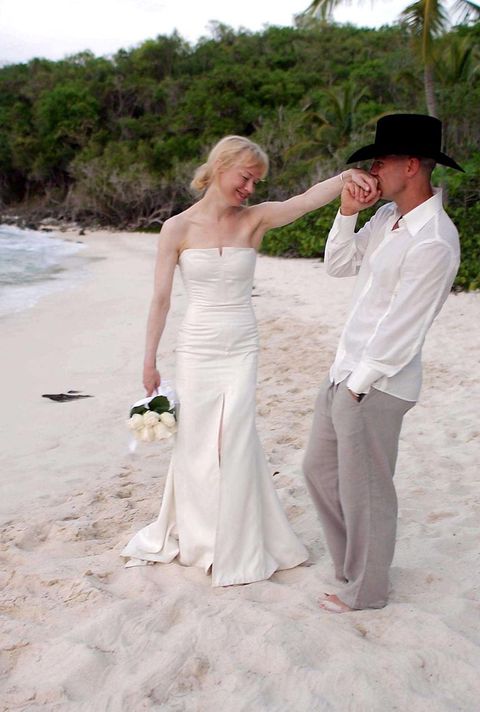 Later on, Kenny explained that Renée checked the “fraud” box on the annulment documents because they believed it was the “least harmful.”

“The only fraud that was committed was me thinking that I knew what it was going to be like, that I really understood what it was like to be married, and I really didn’t.”

Renée also clarified in 2016 while speaking with The Advocate that the term “fraud” was “simply legal language and not a reflection of Kenny’s character.” She also said that the rumors about Kenny made her upset.

“It made me sad that somehow people were using that as a way to be cruel and calling someone gay as a pejorative, which has fateful consequences. Of course, there’s the bigger-picture problem of why anyone had to make up a story at all.”

In 2010, Kenny went on Oprah and again addressed their short-lived relationship. When Oprah Winfrey asked the “She’s Got It All” singer if the lack of time contributed to their annulment, Kenny responded, “that and the fact that I panicked.”

After explaining to the talk show host that he considered his marriage to Renée outside his “box,” he called her a “sweet soul.” Kenny then explained that he hoped to get married one day but “felt that the idea of marriage made me lose my identity … I just don’t know that I’ve found anybody bigger than that.”

Renée has never remarried, though she has since been romantically linked to Bradley Cooper and Doyle Bramhall II. Meanwhile, Kenny has been rumored to have dated Adrianna Costa and Vane Millon.

On the career front, both have thrived since their annulment. Apart from starring in Bridget Jones’s Baby, Case 39, and more, Renée is currently nominated for a 2020 Oscar for her portrayal of Judy Garland in Judy (she already picked up a Golden Globe, Screen Actors Guild Award, Critics Choice Award, and BAFTA for the performance). Kenny, too, has enjoyed great success over the past 15 or so years, winning various CMA and Billboard Music awards and garnering five Grammy nominations (six total, if you count his Hey Good Lookin’ recognition in 2004).

When it came to COVID-19, Indigenous Australians sent it packing