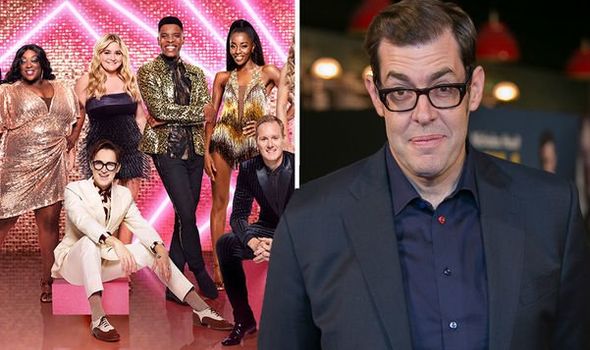 The term “curse” has been used to describe relationship break-ups involving the contestants or professionals on the BBC show.

On whether he’d ever sign up for a go on the dance floor, he said: “I don’t have time to do all the training and have an affair.

“We get every single piece of gossip, that includes who’s banging who, but also who’s nice.”

Richard went on to tell Private Parts podcast host Jamie Laing that he didn’t need to worry as he had only ever heard good things about him during his series.

The Made In Chelsea star made it to the final of the show with Karen Hauer last year.

Despite their best efforts, they missed out on the Glitterball trophy to Bill Bailey and Oti Mabuse.

Richard was rumoured to be taking part on the show in 2019.

At the time, he took to Instagram to address the claims.

He wrote: “I am delighted to announce that I will not be taking part in Strictly Come Dancing this year!

“I can’t wait to not start rehearsing.”

In the caption, he wrote: “My big 2019 ‘Strictly Come Dancing’ announcement. #WishMeLuck.”

It doesn’t seem as though the The Man Who Died Twice author will be signing up to the show anytime soon, especially while he is in a relationship.

In his latest interview with The Times, he finally confirmed his romance with Doctor Who actress Ingrid Oliver.

The pair met through mutual friends and have moved in together.

He told the publication: “I managed to find love in the pandemic. Sickening, isn’t it?”

“I met someone, we love each other and isn’t that a wonderful thing? I’m annoyingly, blissfully happy.”

Councils will get an extra £1.6billion in funding amid coronavirus