Home » Celebrities » SEBASTIAN SHAKESPEARE: Why Charles is the Prince of Sales

SEBASTIAN SHAKESPEARE: Why Charles is the Prince of Sales – top shirt-maker reveals business is booming since he started wearing her designs

Never mind the ‘Kate effect’. Prince Charles is proving just as influential in the world of fashion as the Duchess of Cambridge, as top tailor Emma Willis reveals business has been booming since he started wearing her designs — which include the royal boxer shorts.

‘I’ve been making shirts for him for five-and-a-half years, after one of his dressers dropped into my shop in Jermyn Street,’ she tells me.

‘I’ve been in the business for 30 years and I’ve had the shop for 20. But it really started growing in the past five years, since he started coming to us. 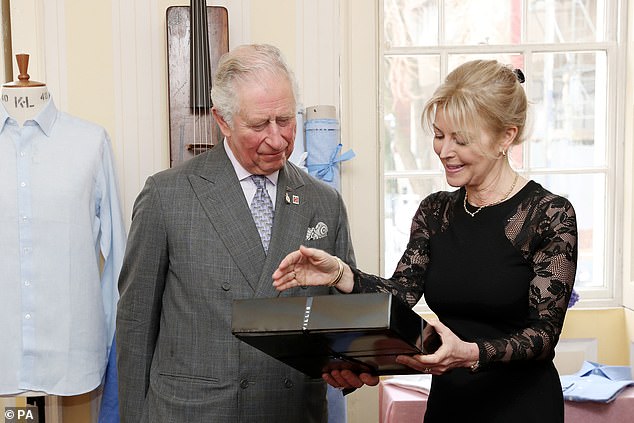 ‘He is very much respected in the fashion world for his style. Without any doubt he has added a huge amount of value to the brand.’

Willis, whose clients also include film star Benedict Cumberbatch and model David Gandy, says HRH made a big impression when she gave him a tour of her factory in Gloucester earlier this month.

‘In an hour he had very meaningful conversations, from the craftsmanship of sewing to mental health with a poet soldier. Everybody liked him.

‘People said he was so down to earth, so funny and cool. He thanked us for “all the beautiful shirts and boxer shorts you all make”.’ The Prince is a keen supporter of the mother-of-three’s charity Style For Soldiers, which she set up in response to casualties of war incurred in Iraq and Afghanistan. 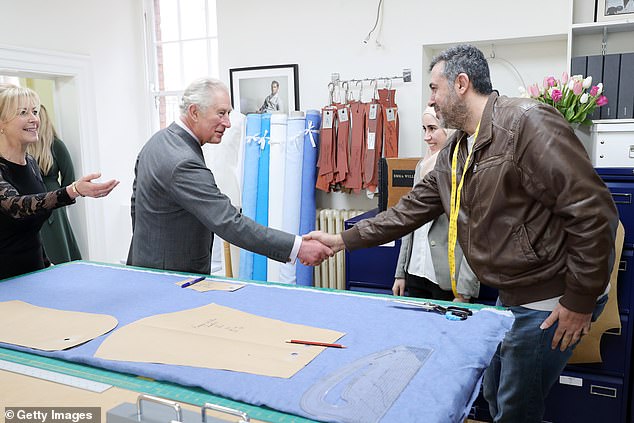 The Prince greets Ibrahim Khalil, a cutter and Syrian refugee, in the cutting room during his visit of the Emma Willis LTD factory. Charles is said to be ‘very much respected in the fashion world for his style’ and has added a ‘huge amount’ of value to the brand, said Emma

In 2016, he gave a speech at their Christmas party.

‘He likes us because we’re known for our English make and our high quality,’ Emma adds. ‘I buy very luxurious cottons from Switzerland from a beautiful mill there which is very environmentally friendly in its production.

‘The Prince understood the importance of respecting the planet decades before it was fashionable. We repair as well and he has been an advocate for looking after clothes and repairing rather than buying new — the opposite of fast fashion. 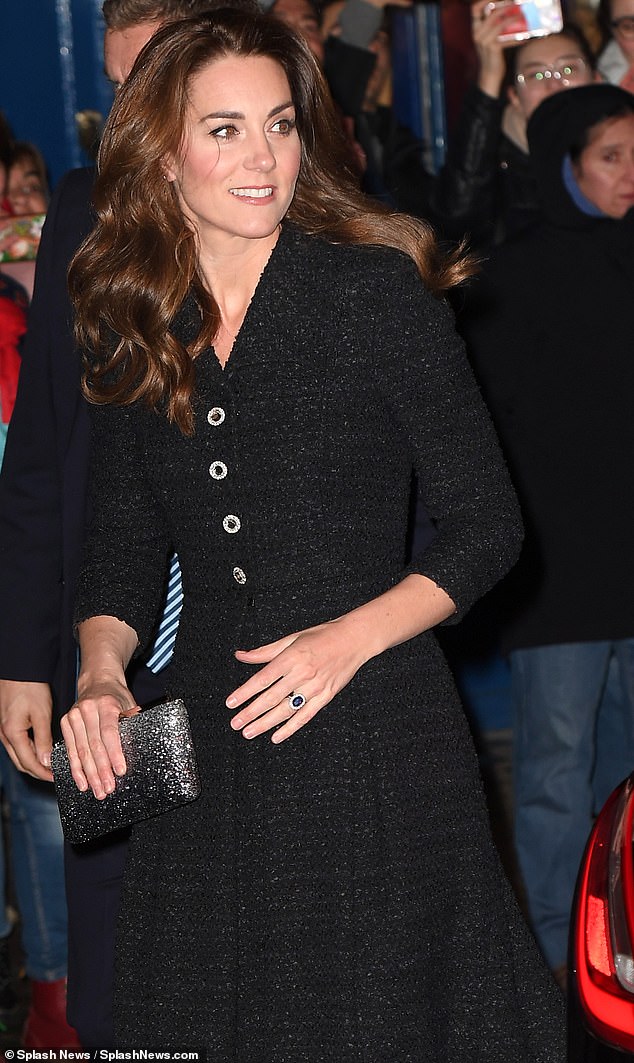 The Kate Effect is proving to have competition from Charles in the fashion world, who Emma called ‘down to earth, so funny and cool’. It comes as the Duchess of Cambridge wore a pair of Marks & Spencer trainers to a SportsAid event at London Stadium which sold out within hours

‘He must have about ten of our shirts, two or three of which are lilac, a colour he really likes.’

Her royal ties could be bolstered next month, when she finds out whether her firm has been granted the Royal Warrant.

‘We were encouraged to apply for that by the Royal Warrant Holders Association.

‘It would be wonderful if we got that.’

Risque cartoon is the real who drawn it

Daggers are out at the Crime Writers’ Association following the re-publication of a cartoon in its magazine, Red Herrings.

It shows a middle-aged man being asked by a colleague whether a course for female would-be crime writers has been successful.

‘Absolutely!’ the gent replies. ‘I pinched three plot ideas and slept with two of the students!’

It’s all too much for Linda Stratmann, chair of the CWA, whose members include Rebus-creator Ian Rankin. ‘I was deeply shocked at the appalling cartoon dredged from the primordial slime of history,’ she says, adding that its publication ‘in no way represents the opinion or policy of the CWA’.

When, exactly, in the ‘primordial slime’ did the cartoon first appear? ‘Nine or ten years ago,’ editor David Stuart Davies tells me.

Its original publication caused not a word of comment, adds Davies, who marked its reappearance with the ironic comment: ‘Ahh, the good old days.’

How Toff is finding fame a bit of a jungle

Queen of the I’m A Celebrity jungle Georgia Toffolo is cagey about her engagement to George Cottrell, the millionaire aristocrat dubbed ‘Posh George’ who spent eight months in a U.S. prison.

When I ask her about their impending nuptials at the launch of her fashion collection Shein X Toff in Chelsea, she explains: ‘It’s a conscious decision I’ve made not to announce everything.’

The 25-year-old adds: ‘I fear that being in the public eye is b***dy hard and I really want to protect myself mentally and want to create a cocoon around the people that I love — it’s worked so far.’ 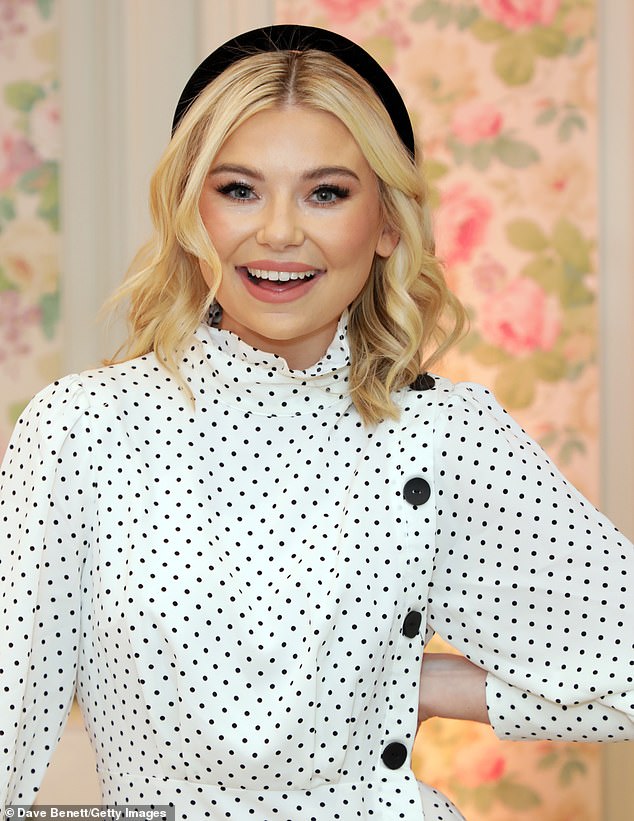 Speaking about her engagement to millionaire aristocrat dubbed ‘Posh George’, Georgia Toffolo revealed how she ‘wants to protect herself mentally’ and wants to ‘create a cocoon around the people that she loves’ (pictured at the launch of SHEIN x Georgia Toffolo in London on February 27)

Sir Mick Jagger’s grandson Ray has demonstrated a flair for design — just like his mother, Jade.

Jewellery maker Jade, whose mother is activist Bianca, posted this snap of the five-year-old playing with a semi-precious stone in Jaipur. 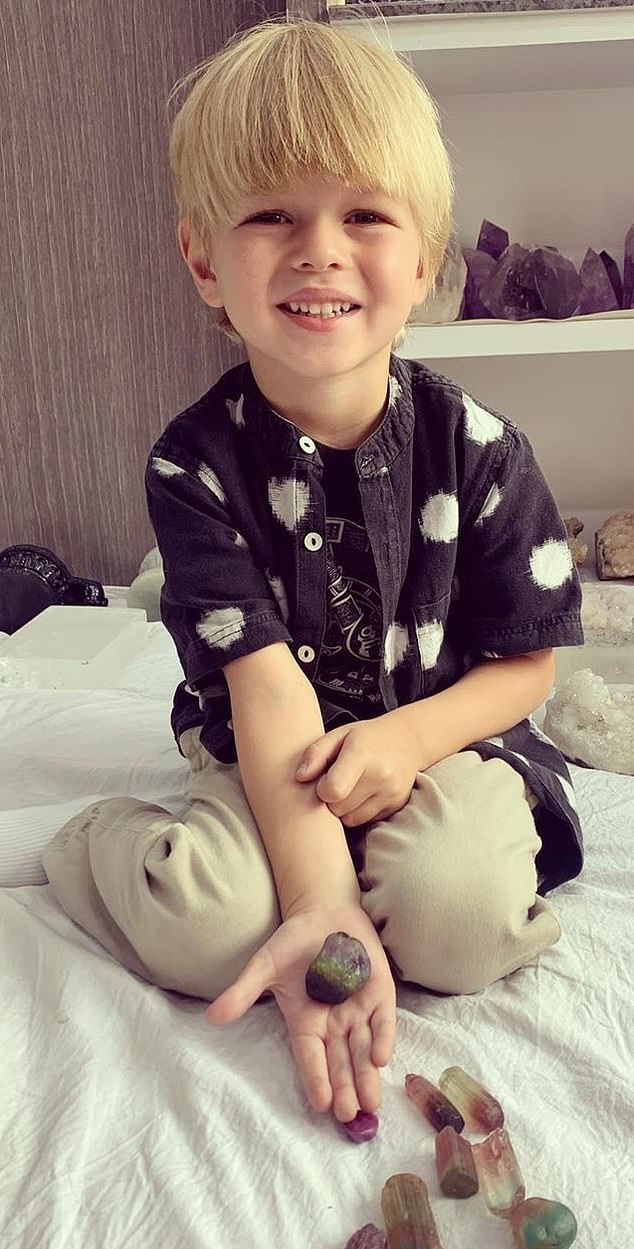 Sir Mick Jagger’s grandson Ray is pictured trying his hand at jewellery design in Jaipur. He also holds an interest in stones

‘First day at work with me and his first necklace design, Jagger and son,’ she captions it.

Ray, whose father is DJ Adrian Fillary, has already shown he has inherited his grandfather’s dance moves after his mother shared a video of him gyrating on the floor. He was also pictured holding a microphone.

Being brother to the future queen doesn’t always mean you get to be top dog.

Just ask James Middleton, who was upstaged by his golden retriever Mabel and cocker spaniel Ella this week, as they posed on a special doggy podium at Mayfair’s George Club. ‘We have just become members as part of the club’s new dog committee,’ the Duchess of Cambridge’s brother tells me.

The committee meeting was the first in a series of fundraising events for canine welfare.

James, who has nine dogs, is working on a documentary about how his pets saved him from depression.

‘Instead, he had a silver tongue. He once said the only talent he had was his charm, but he undersold himself. He had a taste for fine food and fine clothes and he put them on his expenses. He was once told by the expenses department: “I see you have eaten a mohair suit”.’

California 'PotholeGate Vigilantes' make repairs themselves instead of waiting for city