Home » Celebrities » Spotlight: Picture this – the new you 20 years on

Remember the retouching scandals that hit magazine land a few years ago and the female celebrities – Mariah Carey, Kim Kardashian, Nicki Minaj and Lena Dunham among them – who lined up to complain about having their crow’s-feet smoothed out, their legs slimmed, their hair thickened, in high-gloss cover images? 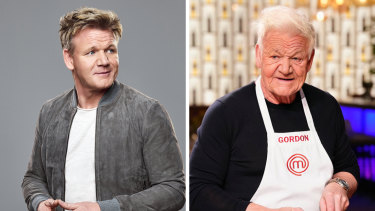 Gordon Ramsay goes from medium to well-done with the help of the Faceapp photo editing app.Credit:Alamy/Supplied

The so-called Photoshop wars really kicked off in earnest in 2003, when actor Kate Winslet, dismayed by an unrealistically skinny version of herself on the cover of British GQ magazine, griped to the BBC: “I actually have a Polaroid that the photographer gave me on the day of the shoot … I can tell you they’ve reduced the size of my legs by about a third.”

Ten years later, Lady Gaga took her objections about a super-airbrushed image of herself on the cover of Glamour magazine straight to its editor in a speech at the publication’s annual Women of the Year Awards. “What I want to see is change on your covers,” she protested. “When the covers change, that’s when culture changes.” Awkward. This represented a seismic shift from the 1980s and ’90s, when celebrities would be the first to have their publicists harangue editors if their visages were anything but flawless.

The retouching wars now look a bit quaint given that you no longer need Photoshop or a desktop computer to enhance your face or body, just simply a smartphone and your choice of a dozen or so photo editing apps. And amid all the glamour filters available, it would appear there is also a demand for hyper-realistic, warts-and-all photos.

Witness last month’s FaceApp challenge, in which celebs and non-celebs alike posted photos of what they might look like in 20 or more years’ time. The app, which uses artificial intelligence to age users’ faces, is an update of a 2017 app that could make you look younger and more attractive. The app grabbed headlines when it was claimed that its Russian developer could harvest private information from users, an accusation roundly rejected.

No prizes for guessing the vast majority of FaceApp users are young and dewy fresh. Among the celeb exceptions: an already cantankerous Gordon Ramsay.

Trump is finally bringing justice back to college campuses

Megyn Kelly Gets Fired Up Over Kavanaugh Accusers: 'He's Saying He Didn't Do It!'