Products featured are independently selected by our editorial team and we may earn a commission from purchases made from our links; the retailer may also receive certain auditable data for accounting purposes.

Your smartphone is the one piece of technology you’re likely to keep on you at all times, and may even be your primary computer, camera, or communications device.

If that’s the case, and you’re due for an upgrade, you should consider getting a phone with the largest screen possible. Yes, you give up some portability (and comfort if you tend to wear tighter pants), but the benefits are equally enticing.

A big screen phone makes it easier to read if you need to bump up the size, offers a larger keyboard when typing, and a better experience when viewing pictures or video. Bigger screen phones also have larger batteries, so you’ll need to charge them less frequently. It’s very possible to get a full day’s use out of a big screen phone before you have to plug it in.

If you’ve never tried a big screen phone, we’ve rounded up four great options for you to check out.

What Are the Best Big Screen Phones?

There are many factors to consider when choosing the best big screen phones for you; below are the most important ones, which we considered while we were researching this list.

Screen Size: The whole point of getting a big screen phone is the size of its display. We’ve chosen smartphones with at least a six inch screen, with some options being closer to seven. These are definitely two-handed devices, but will give you an almost tablet-like experience when you use them.

From Stress Relief to Muscle Recovery, Here's Why It's Time to Invest in a Massage Chair

Chasteness, Soda Pop, and Show Tunes: The Lost Story of the Young Americans and the Choircore Movement

Battery: If your phone is dead, all of its impressive features are irrelevant. Long, reliable battery life is therefore key when researching smartphones. Battery size is measured in mAh, with high-end batteries clocking in at about 3500-5000mAh.

Storage: Between pictures, videos, contacts and apps, your phone’s storage should be a top priority. Our picks have a minimum of 64GB — enough to hold thousands of songs and pictures, or dozens of hours of HD video — but many come with 128GB. If you record a lot of 4K video, you may want to consider getting a phone with even more storage.

Camera: Cameras have become a key factor in smartphone differentiation because we all want to take great pictures (and selfies). Cameras are rated based on the number of megapixels (MP) they capture. Some also have added technology for night photography, zooming, portraits and so on. All of the phones on our list may be small in size, but they all pack powerful photography features. 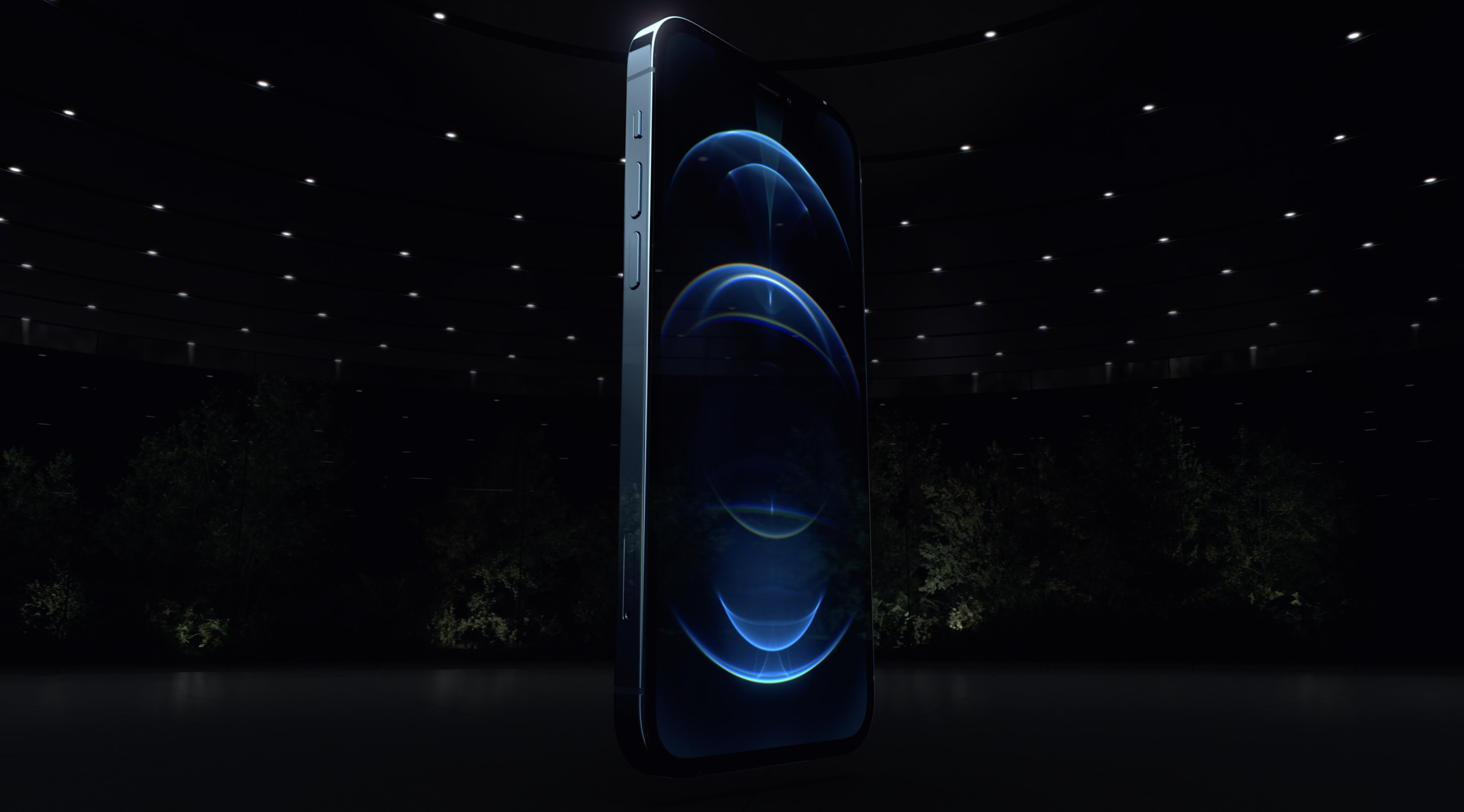 The iPhone 12 Pro Max is Apple’s latest big screen smartphone, and it’s the one we recommend to previous iPhone owners, or anyone considering switching from Android.

It has a 6.7 inch widescreen display with a resolution of 1778 x 1284 (458 pixels per inch). Text looks sharp, and images and videos look crisp from every angle. The screen is remarkably consistent, and even looks good in both high and low brightness settings. We’ve tested this phone for months, and nothing we’ve looked at has appeared washed out.

The iPhone 12 Pro Max has a 3687mAh (milliamp) battery, which Apple says can last up to 17 hours per charge when watching video. In our experience of mixed use (streaming, texting, web browsing, using apps), the number is closer to 10, which is still great. You can recharge its battery using a Lightning cable, Qi wireless charger, or MagSafe magnetic charger. If you plan on using a cable, we recommend this power adapter from AUKEY because Apple no longer includes one in the box.

You can get the iPhone 12 Pro Max in three storage tiers: 128GB, 256GB, and 512GB. The entry level option is going to be fine for most people, but bumping up to the middle level makes sense if you plan on keeping your phone for several years. The 512GB model is only worth considering if you’re a serious photographer, or take a lot of videos.

Apple seriously stepped up its phone camera game with the iPhone 12 Pro Max, introducing new hardware to improve low light shots, and improving its optical zoom. The backside camera system is made up of three lenses: A 12 megapixel ultra wide camera, 12 megapixel wide camera, and 12 megapixel telephoto lens. You can take pictures at .5x, 1x, and 2.5x zoom lengths, which is a pretty good range.

The front-facing camera is an eight megapixel lens, which also enables FaceID, a technology that allows you to unlock the iPhone 12 Pro Max by scanning your face. All of the cameras on this phone can record 4K video, and take portrait mode (blurred background) pictures. The back cameras use a technology called sensor-shift optical image stabilization, which moves the entire camera sensor to capture more light in a dim scene. These cameras don’t have as many megapixels compared to other premium phones, but in many cases they can capture better photos.

The iPhone 12 Pro Max doesn’t have a lot of “extras” because Apple focused so hard on making the core components of the phone so good. The new flat-edged design feels better in the hand than any iPhone since the iPhone 5. MagSafe wireless charging is twice as fast as traditional wireless charging. The backside cameras can record full Dolby Vision HDR (high dynamic range) video.

All of these features make the iPhone 12 Pro Max the best big screen phone you can get right now. There are plenty of great options if you prefer using Android over iOS, but this is our top pick. 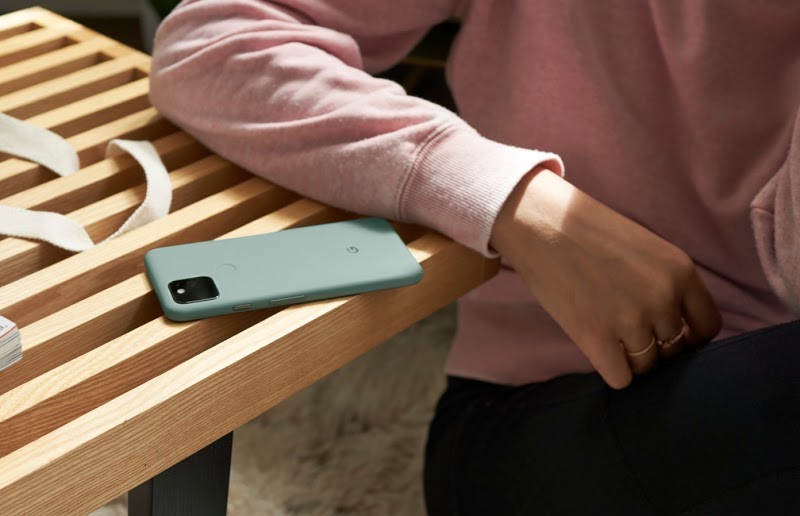 The Google Pixel 5 is Google’s latest flagship smartphone, and one of the best big screen Android phones you can get.

It has a 6 inch widescreen display with a resolution of 1080 x 2340 (429 pixels per inch), which is high enough that text, photos, and videos will all look great. The Pixel 5 has a 90Hz refresh rate, which means scrolling and navigating through apps on your phone will look a lot smoother.

The phone has a 4080mAh battery, which means it should last roughly as long as the iPhone does on a single charge. Android is a little less power efficient than iOS in some cases, which evens out the increase in battery size. You can recharge the Google Pixel 5 by plugging it into a power adapter, or using a Qi wireless charging pad.

You can get the Google Pixel 5 in two storage sizes: 128GB and 258GB. Again, we recommend the base model, but doubling your storage won’t hurt.

The camera system in the Pixel 5 is top notch, but largely unchanged from Google’s last-generation flagship phone. It has a 12.2 megapixel wide camera and 16 wide angle camera on the back side. This two-lens system allows the phone to capture photos with better depth (a feature that predates the iPhone’s portrait mode). Both of these cameras can record 4K high dynamic range video at up to 60 frames per second. The front-facing camera can take eight megapixel shots, but is limited to recording 1080P video at 30 frames per second.

The Pixel 5 uses a technology called computational photography to make adjustments to white balance, color, and lighting to create world-class pictures, but other companies are using similar techniques to get comparable results.

The main reason we’re recommending the Pixel 5 over other Android phones is Google’s commitment to releasing regular software updates for the phone. Android phones aren’t guaranteed to be supported with new features or security patches, but the Pixel 5 is. This is a big deal if you only upgrade your phone every few years.

If you prefer using Android, and want a top-notch big screen phone, the Google Pixel 5 is the right pick. 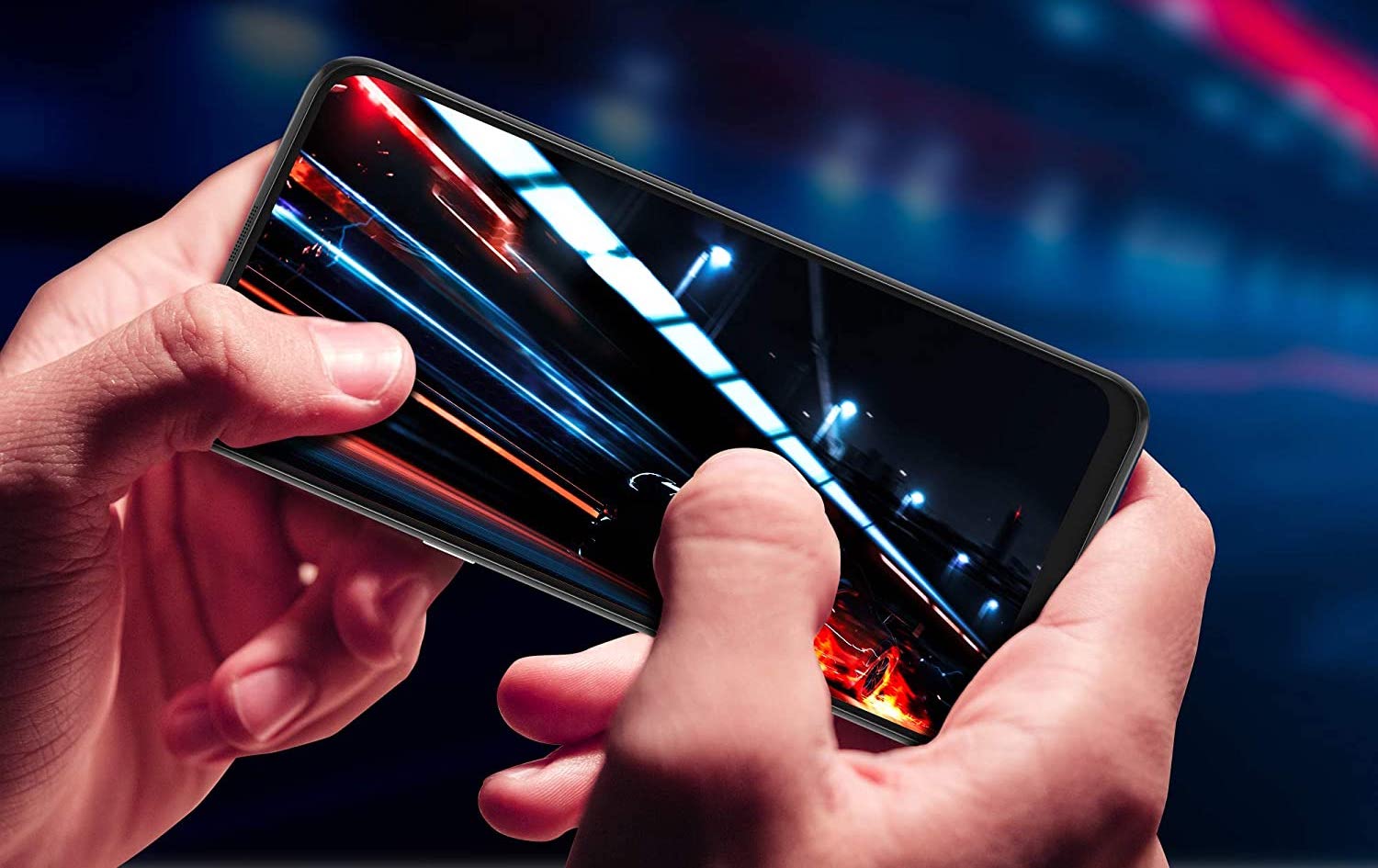 If you’re shopping for a big screen smartphone on a tighter budget, you can’t go wrong with TCL’s 10L. The $200 phone delivers great features for the price.

It has a 6.4 inch display with a resolution of 1080 x 2340 (495 pixels per inch), which puts it in the middle of the pack in regards to screen size and resolution. This is the most important component of a big screen phone, and its impressive the 10L stays competitive.

The 10L has a 4000mAh battery, which TCL says can last for up to 16 hours if you play video at the default brightness, or 27 hours if you talk on the phone with 4G enabled. The amount of battery life you actually get will depend on your personal usage, but the 10L should last all day on a single charge. You can charge the phone with a USB-C cable.

TCL’s 10L only comes in a 64GB storage size, which is a little low. The upside is that you can add more storage by popping in a MicroSD card. A 256GB card only costs $33, and more than quadruples the 10L’s storage capacity.

It may not have as many bells and whistles as the more premium big screen smartphones in this guide, but the TCL 10L more than holds its own. It delivers on all the core features you’ll actually rely on every day, and costs a quarter of the price. 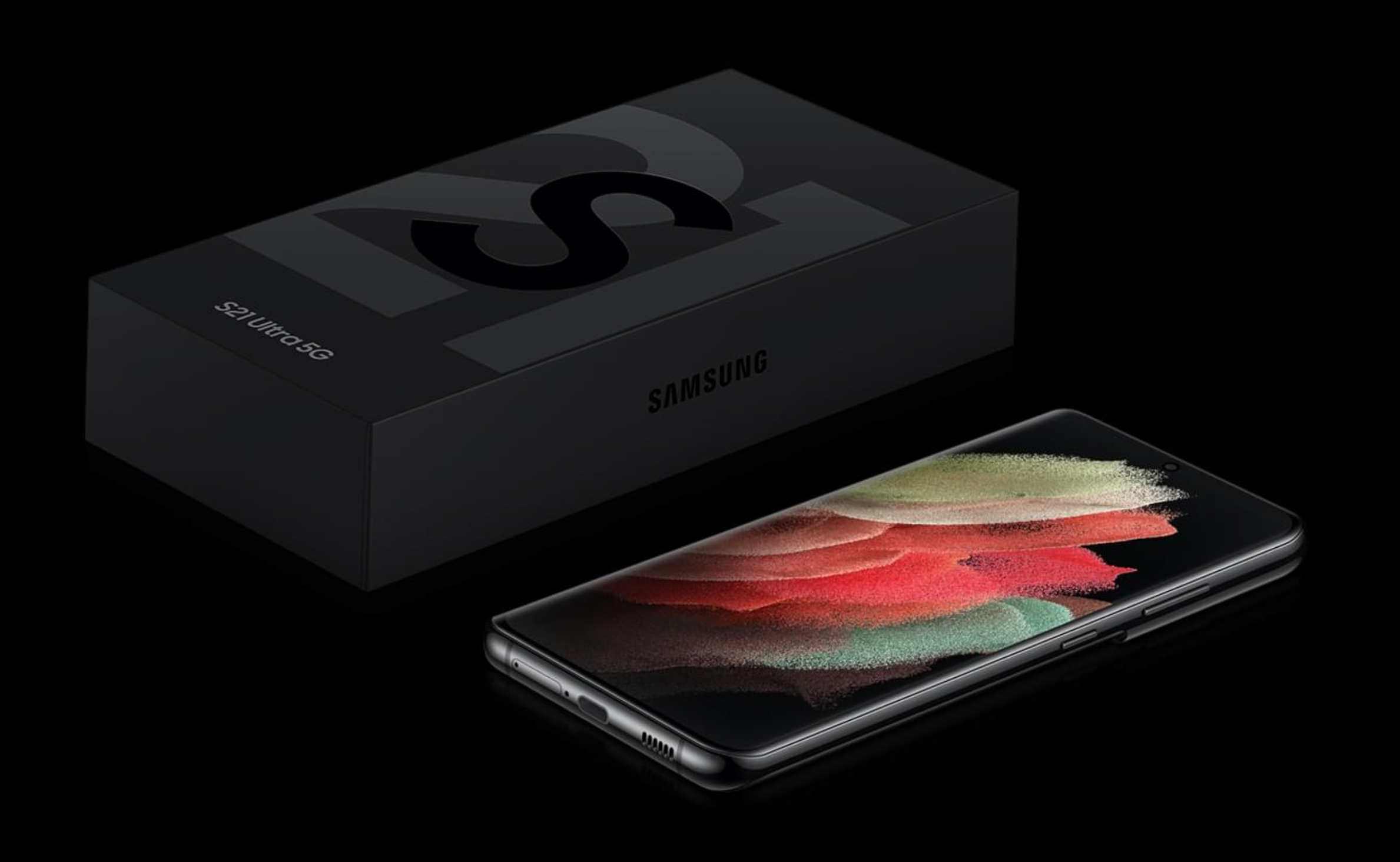 The Galaxy S21 Ultra 5G is Samsung’s newest big screen smartphone, and it’s the most technologically advanced Android phone we can recommend.

It has a 6.8 inch wide screen with a resolution of 1440 x 3200 (515 pixels per inch), which makes it the largest, highest quality display in our guide. The screen runs at an impressive 120Hz, which means every action you take will feel incredibly smooth. It’s the highest refresh rate of any phone currently available.

The S21 Ultra has a 5000 mAh battery, and supports fast charging using a USB-C cable, or wireless charging at 15 watts (twice as fast as most phones). Samsung doesn’t offer details on how long the S21 Ultra should last per charge, but you shouldn’t have to worry about battery anxiety with this phone. This phone even supports reverse wireless charging, which means you can use it as a wireless charging pad for your other devices or accessories.

Everything about the Samsung Galaxy S21 Ultra 5G is premium; it’s basically the best Android phone you can get, period.If you’re a big screen Android phone user who wants to be on the cutting edge of technology, this phone is the right choice.

'Below Deck Sailing Yacht': Jenna MacGillivray Shares the Heartbreak She Experienced When Her Father Died

Pink rips fan for questioning Carey Hart’s parenting skills: ‘Are you even a parent?’

This wristband tells your boss if you're unhappy