Netflix’s new docuseries, Crime Scene: The Vanishing at the Cecil Hotel, covers the missing persons case of Elisa Lam, who disappeared during her 2013 stay in Los Angeles and was found dead on the roof of the Cecil Hotel. Connected to this case, many erroneously believed, was Pablo Vergara, a Mexican musician who went by the artist name “Morbid.”

Internet sleuths had discovered videos of Vergara at the Cecil Hotel. As Vergara often performs music in character—dressed in makeup and trench coats and perpetrating fictional violence in his music videos—the sleuths fingered him as a suspect.

Forensic pathologist Dr. Jason Tovar who was interviewed for the series explains the illogic behind the accusations. “All the background information that’s used to rule [Lam’s death] as an accident is not necessarily made available to the public,” he says. “For the people on the internet, you really don’t have the full story in front of you. You don’t have all the facts.”

Missing crucial facts led many to begin pointing fingers—at the LAPD, at the U.S. government, and at the musician who had been staying at the Cecil hotel almost a year before Lam ever arrived, “Morbid.”

Tim Marcia, a retired LAPD homicide detective who was assigned to the Elisa Lam case, was also interviewed for the series. He sets the facts straight. “I remember some bizarre thing where the web sleuths were trying to connect Elisa’s case to some singer in Mexico. But all I can say is he’s not involved.”

Marcia also has thoughts about the nature of the accusations. “I can understand how the web sleuths were trying to do the right things for the right reasons just like we are,” he explains. “You get addicted to it—the challenge of putting pieces together, the excitement of being on the chase. But in this case, they were getting further and further away from the evidence.”

And getting away from the evidence would nearly destroy Vergara’s life. 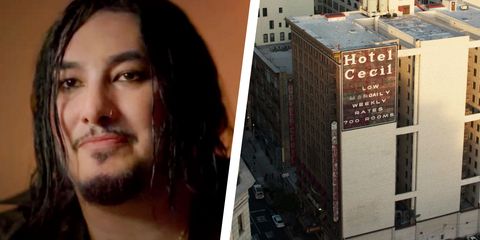 Pablo Vergara is a musician, actor, screenwriter, and photographer who goes professionally by “Morbid.” He’s worked in music for fifteen years. In 2013, just after Elisa Lam was reported missing to the public, Morbid’s name and image began appearing on Chinese news sites. At the time, Morbid was in Mexico, where he had been during Lam’s entire stay in the U.S.

“Suddenly, I start getting hundreds of messages from people from all over the world,” Vergara recalls when interviewed for the Netflix documentary series. People began directly accusing Vergara of killing Lam, an accusation that caused real legal suspicion.

“After that [accusation], the PGR, which is the FBI of Mexico, did come to my home,” Vergara says. “They asked me if I had made any blood sacrifices for the devil with animals.” There was, of course, no evidence that Vergara played any role in the disappearance, and he was never charged. “Later on, I realized that I was being accused of being the killer just because the web sleuths found a video of me that I had posted on the internet when I was staying at the Cecil Hotel.”

“I have contracts from the recording studio. I have stamps on my passport. And even though I have all these, the web sleuths, they saw me the way I look [while performing] and that’s what triggered them.”

Vergara had stayed at the Cecil in February of 2012. He had uploaded a video of his stay. Still, there was no reason to believe he had crossed paths with Lam, who would not check in until almost twelve months later.

“I was in Mexico working on my album,” Vergara says. “I have contracts from the recording studio. I have stamps on my passport. And even though I have all these, the web sleuths, they saw me the way I look [while performing] and that’s what triggered them.”

Many suspected Morbid simply because of the visuals he uses for his music—videos featuring murder and other violent imagery. “Sure, I mean, some of the lyrics talk about death and murder or whatever, but it’s just lyrics,” Vergara explains. “It’s just music. It’s art. It doesn’t make me a killer.”

Morbid made a video denying the accusation, but he was still being harassed online. “The web sleuths, they wouldn’t let it go. They flagged my accounts, and I ended up getting my YouTube channel, my Facebook account, and my email account terminated.”

Vergara felt the sleuths wanted to destroy him, and, in a way, they did. The mounting accusations and death threats caused Vergara to have a mental breakdown. “At a point when you get so much hate and just negativity, there’s something breaks in your mind,” he says. “You can’t defend your life, your music and art. No matter how strong you are, you feel powerless.”

Vergara says he attempted suicide and woke up in a psychiatric hospital.

“The web sleuths go on with their life like nothing happened. But they really turned my life upside down. I do feel like I have lost my freedom of expression. I actually haven’t made any more music. When I try, it’s not the same.”

When Lam’s death was officially ruled an accident, Vergara says no one reached out to apologize to him. “Lots of people get cyber bullied, and they don’t make it,” he says, considering himself lucky to still be alive. But there is a price. “I have to live with [the accusations] for the rest of my life.”

The Masked Singer on FOX: Turtle’s identity given away in costume clue?