The Accidental Country Girl starts by cooking the bacon for the bacon jam. She then takes the bacon out of the pan and makes the sauce. For the sauce, Drummond pours a can of beer (amber lager) into the pan. She uses the same pan that she cooked the bacon in. She says this adds flavor to the dish. Next, Drummond adds brown sugar, apple cider vinegar, chopped rosemary, mustard seed, and crushed red pepper.

Drummond stirs the mixture and scrapes the bottom of the pan so she can get all the remaining bacon bits to combine. She says the mixture must cook slowly on medium-low heat for about 20 minutes. She says during this time it will start bubbling and “turning into magic.”

Next, Drummond prepares the pork tenderloin. We’re guessing Ladd Drummond loves this dish since it’s meat based. (We doubt it would be the longest meal of Ladd’s life.) She says this is one of her favorite cuts of pork because you can add whatever seasonings you like, and it takes on the flavor of the seasonings you use. She says when she roasts the tenderloin with the bacon jam it makes “the most incredible combination.” Drummond seasons the tenderloin with a garlic-pepper blend. She says this seasoning is good for steaks or pork.

Next, Drummond adds the pork to a pan that has been pre-heated with olive oil. Her goal is to sear the pork, so she lets it cook on one side until it starts to get brown. In the meantime, she begins preparing the noodle casserole. You can find the complete ingredients and directions here. 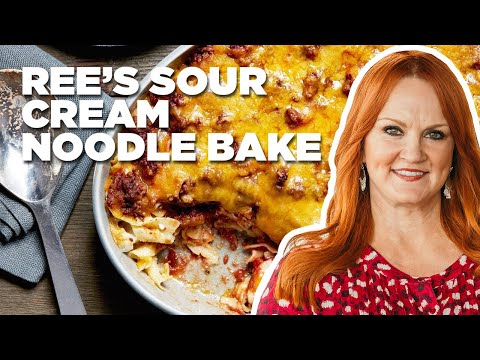 Drummond says she thinks of casserole whenever she thinks of a spring dish (you can find some of her spring desserts here). “I think it’s because I had friends who invited me to their Passover meals, their seder meals, in the springtime,” says Drummond. “And there was always a peach noodle kugel or some kind of noodle kugel.” Drummond says this isn’t a noodle kugel, but it’s inspired by those noodle casseroles.

For the casserole, Drummond place a mixture of sour cream, cottage cheese, and black pepper in a bowl. Then, she places cooked egg noodles in a bowl. She says she likes egg noodles that don’t have yolks because the texture stays firm. She stirs the noodles and mixture.

Drummond doesn’t add salt because she plans to add cheese, and she says it’s “plenty salty.” She says the cottage cheese mixes with the cream cheese and makes a creamy base. “So, if you think you hate cottage cheese with a fiery passion, you won’t even know it’s in there,” says Drummond.

Next, Drummond adds sharp cheddar cheese and sliced green onions. Before she stirs the noodles, she turns the pork over. She says it’s a good idea to sear the pork before putting it in the oven. “Because pork is a little bit colorless and lifeless, so it’s good to kind of help it along,” says Drummond.

The Accidental Country Girl says she loves these kinds of casserole because you can add peas or other spring vegetables. It’s an easy meal to customize to your liking. For the next step, Drummond places the pasta into a casserole dish. Then she places the noodles and the pork in the oven. You can find the complete ingredients and directions here.

Britney Spears Appears in Court for Conservatorship Hearing After Treatment

The story behind Sesame Street is told in a new documentary

Shoppers have an all-new hack that claims to keep veggies fresh for twice as long: 'It really works'