“The TV market will still be impacted by the damage caused to the economy earlier in the year,” Ampere Analysis projects

Even with the return of sports and an upcoming presidential election, the TV ad market is in rough shape, with a new report from Ampere Analysis showing American TV ad revenue is expected to plunge 15.2% for all of 2020.

The steep decline in ad sales comes as the industry, like many others, has been struggling due to the coronavirus pandemic. Ampere Analysis, a London-based research firm, said the TV ad market is “especially vulnerable” during economic downturns because of lower trade and consumer spending. The decline also stands in stark contrast to last year, when TV ad revenue increased 6%.

Overall, TV ad sales are expected to bring in $46.5 billion this year, compared to the nearly $55 billion in revenue in 2019 — and that’s factoring in the usual election-year spike in campaign ads amid the fierce battle for control of the White House and Congress. The firm’s report projects TV ad spending to be down 12% in Q3 and 4.2% in Q4. “Although there will be some economic recovery and increased advertising spend from the elections, the TV market will still be impacted by the damage caused to the economy earlier in the year,” the report said.

Much of the damage came during the second quarter, with all the top U.S. broadcasters seeing double-digit declines in ad sales. And as Ampere Analysis pointed out, the “hardest hit were the networks exposed to sports broadcasting,” with ESPN parent company Disney seeing domestic TV advertising plummet 40.5% year-over-year in Q2, while Turner’s ad revenue fell 37.1% year-over-year.

You can get a look at the damage to other major broadcasters below, via Ampere’s report: 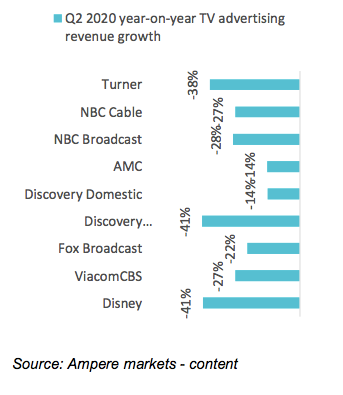 The good news for the networks: These figures are expected to improve during the third quarter, thanks in large part to the return of the NBA, MLB, NHL, and especially the NFL kicking off in September (assuming that still happens). Broader economic signs — including consumer confidence, spending and job data — point to the the TV ad industry rebounding during the second half of the year.

And it also helps that it’s an election year — though both Republican and Democrats increasingly lean on digital ads so that TV ad spending may not seem the spike that it has in past campaign years. This trend was already in effect in 2016, when TV ad spending dropped 20% compared to the 2012 election cycle. The absence of most college football advertising won’t help, either.

“Although recovery is expected to start in [the second half of] 2020, full recovery is not expected until 2022 as the aftershocks of economic contraction carry over into 2021,” Ampere Analysis added.

'The Forty-Year-Old Version': An Auteurist-Comedy Star Is Born

Moza Mirfak puts you in the best light

Coronavirus: Will immunity rapidly fade or last a lifetime?