The 31-year-old linebacker revealed that he had contracted COVID-19 on Thursday, April 16, and made a virtual appearance on the third hour of the Today show the next morning to discuss his experience. Miller’s diagnosis made him only the second known case of the virus among NFL players, along with Los Angeles Rams center Brian Allen. 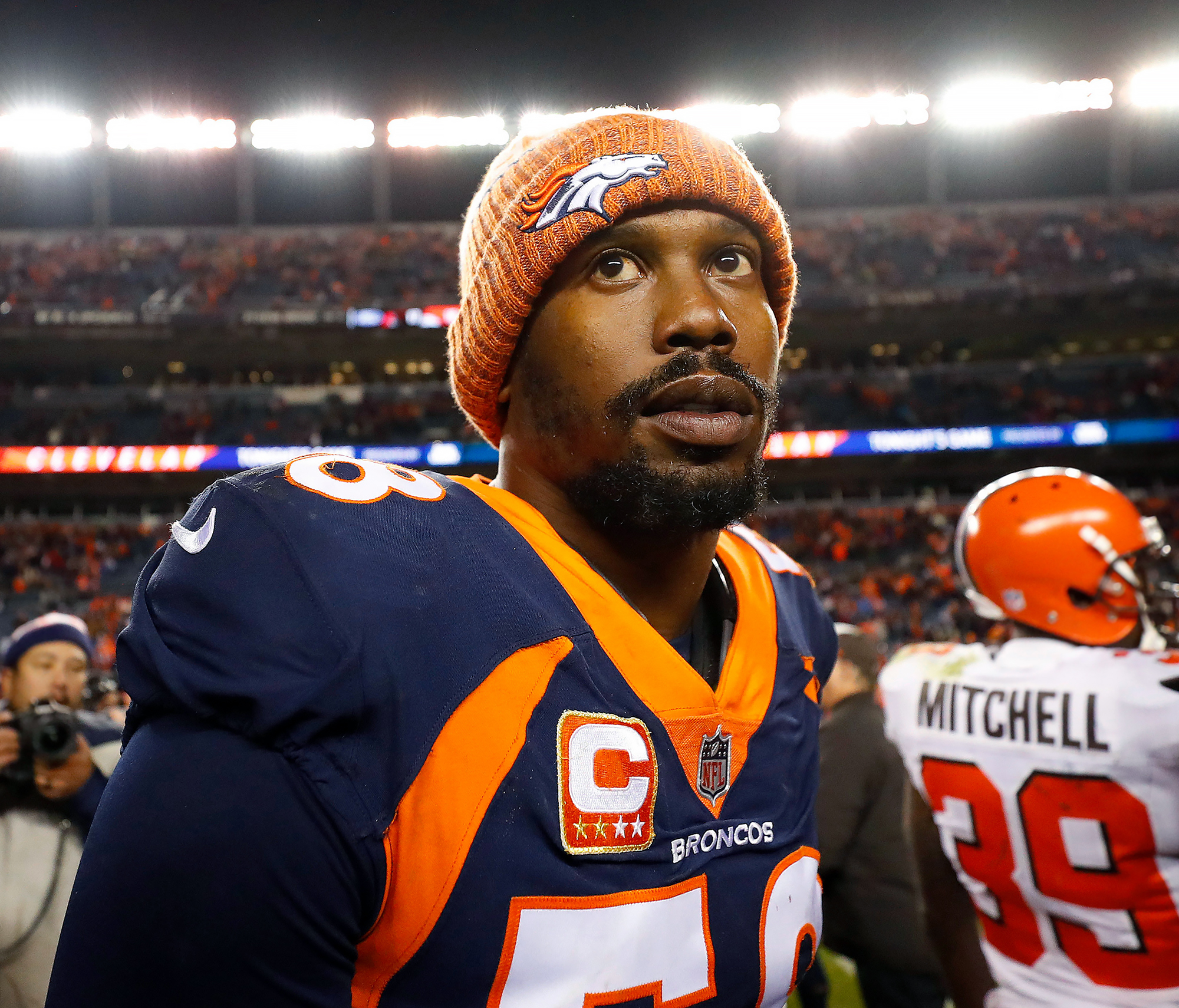 “It all started with just a simple cough and it got worse. I also have asthma. My girlfriend, she was telling me that I wasn’t sounding normal and I should try my nebulizer so I did. [I use it] before football games and before practice regularly, but this time was different. It really didn’t work like it should,” the Texas native explained. “I had waited another day and the cough still didn’t go away … I got tested and two days later, my doctor called me and said I had a positive result for COVID-19.”

The Texas A&M alum admitted he was “shocked” to find out that he had tested positive since he and his girlfriend had been paying close attention to the safety guidelines put in place by health officials and politicians.

“We’ve been taking this serious since day one. I started in San Francisco training where I normally train … When San Francisco had the stay-at-home order, we made the decision to come back to Denver,” Miller revealed. “I’ve been here in Denver for about four weeks now. Within that four weeks, I probably left the house four times. With all of those four times, I never got out of the car — just drive to pick up food and come back home. So I’ve really been taking it serious, staying at home.”

Though the former Super Bowl MVP is young and otherwise healthy, he made sure to emphasize that anyone could be impacted by the novel illness when he came forward with his diagnosis on Thursday. After telling a local Denver news station that he was “in good spirits” despite his health scare, Miller reassured fans that he would bounce back soon enough.

“I’m going to do whatever I have to do to get thru this!” he wrote in an Instagram Story. “Take this seriously. It’s definitely FOR REAL.”

While many sports leagues have put their seasons on hold amid the crisis, the NFL was already in its off-season. Miller reflected on the possibility of returning to play in empty stadiums during his Today interview, arguing that the league “shouldn’t move too fast” when it comes to the safety of players and fans.

“Just do whatever is safe,” he said. “Whatever is safe that would always be our first precaution … whatever we have to do to get things back to normal, that’s what we should do.”

Given the constantly evolving nature of COVID-19, Us Weekly wants our readers to have access to the most accurate resources. For the most up-to-date coronavirus information, guidance, and support, consult the CDC, WHO, and information from local public health officials. If you’re experiencing coronavirus symptoms, call your primary care provider for medical advice.

Thousands of wealthy families are using Help to Buy

Chicago P.D.: Lisseth Chavez Not Returning as Rojas for Season 8

“I am a survivor of domestic abuse. This is my story”