When fears of COVID-19 pandemic first started circulating, Brodie Grody, a stripper in Portland, Oregon, saw her income dwindle to about half of what it usually was. “People were scared,” she says. “They were going out less. They were buying fewer lap dances and sitting at the stage less because they were worried about getting too close to us.”

Then, when Gov. Kate Brown announced last week she would be shutting down all restaurants and bars in Oregon, Grody’s already-dwindling income was “wiped out completely,” she says. “We really needed to step it up and start hustling.”

Grody’s boss, Lucky Devil Lounge owner Shon Boulden, stumbled on a solution. Following Gov. Brown’s edict, he tweeted that though the restaurant/strip-club would have to close, they were working on how to keep their employees working, and he joked that he would provide a service where the dancer would deliver food topless. When customers started asking him if he would deliver to their area, “I was like, holy shit, this may be something that actually works,” he says.

From this tweet, Boober Eats was born. For a $30 delivery fee  — a sum is split between the club employees — customers can order a burger and fries (or a salad, or a steak, or any variety of dishes) to their homes, where two dancers will show up accompanied by a driver/security guard. Equipped with masks, gloves, and hand sanitizers, the dancers deliver food to the customer’s doorstep, within the six-feet guidelines established by the Centers for Disease Control.

What's Next for Genea Sky, the Exotic Dancer Whose Fall Off a Pole Went Viral

Though the initial plan was to have them deliver the food topless, “at a certain point we decided we probably shouldn’t be sending topless girls to random people’s houses, so we’re doing it more PC,” Boulden says. The toned-down version: Clad in nipple pasties, the women walk up to a customer’s door, leave the food on the doorstep, then take off their sweaters and “bounce around,” though what that looks like depends on the skill set of the dancer (Grody, for instance, says she flexes her breasts one at a time).

Typically, exotic dancers are classified as independent contractors, meaning they don’t have paid sick leave or other benefits should they find themselves out of work. As a result, following club shutdowns, like many service industry workers throughout the United States, many dancers have been left totally bereft of income. “I’m scared what the coming weeks hold because even if people pay and support [us] from afar… at what point do their extra funds they use to support dancers get affected by their inability to work or travel,” one dancer posted to the subreddit r/strippers. Some dancers have resorted to crowdfunding to support themselves, while others, like many adult performers, are selling content on platforms like OnlyFans. 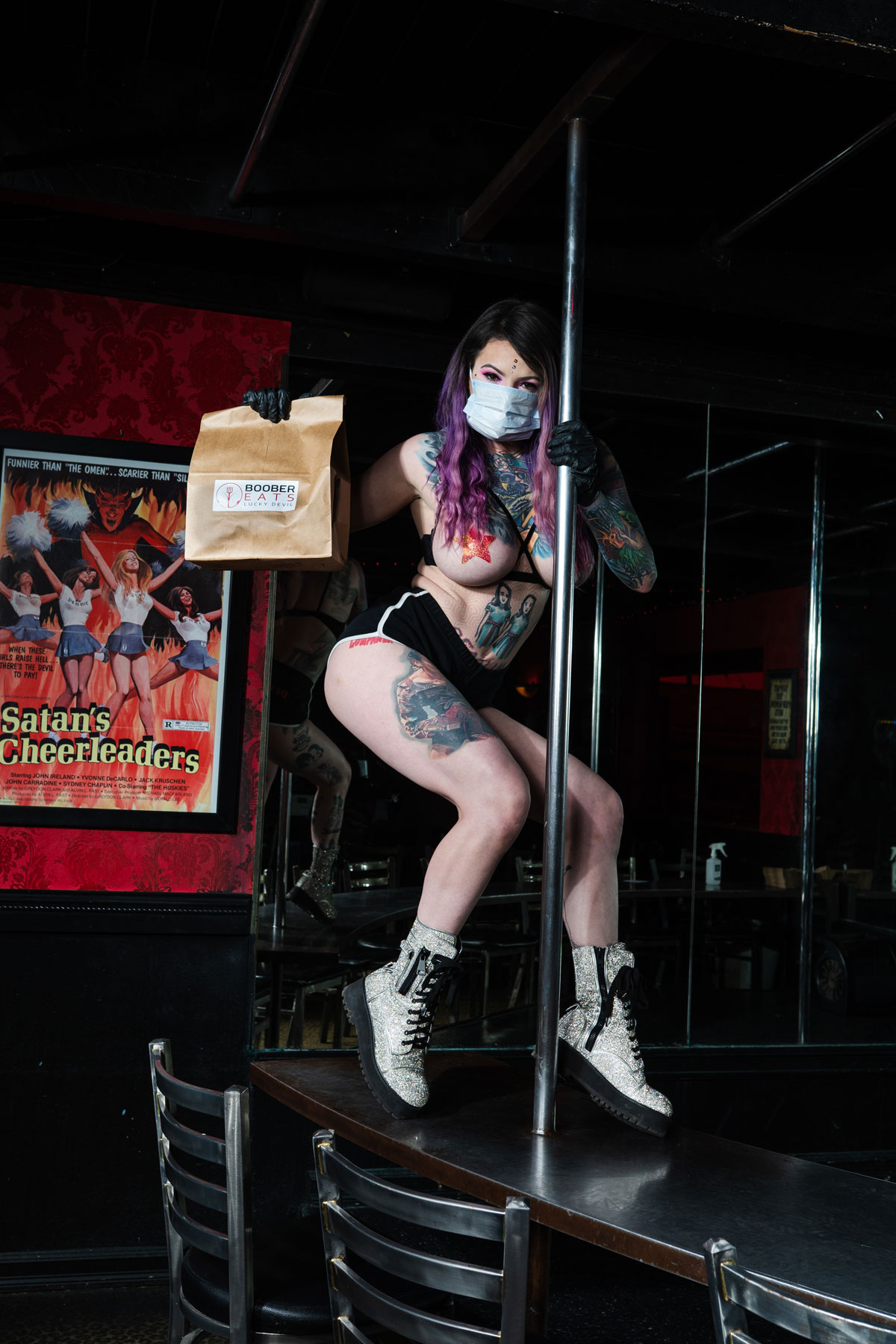 Boober Eats is not a perfect solution. Grodie says she’s making only a quarter of her usual income, though she says it gets better every shift. It’s also not a totally risk-free enterprise: Despite the dancers washing their hands and switching out gloves after every order, they still have to share a car with at least two other people. As a result, some of the club’s employees, particularly those with relatives at heightened risk, have opted to self-quarantine completely instead of going on deliveries, says Boulden. (“None of them have reached out to me, but if they do I’m willing to provide whatever anybody needs,” he said when asked if he would support dancers who were unable to go on deliveries during the pandemic.)

There’s also the omnipresent risk of customers attempting to get too handsy, though that looks a little different in the age of COVID-19 than it would have in the past. Grodie says that thankfully, for the most part, customers have maintained a safe distance, with the exception of one intoxicated female customer who tried to give her a hug. “The bouncer handled it well,” she says.

Still, in an era when small businesses are hemorrhaging money, many venues like Lucky Devil Lounge have to quickly pivot their business models to save their establishments. “We’re trying to continue to employ our employees in a different way that allows us to actually keep our doors open,” says Boulden.

Christmas Day at care homes during the Covid crisis

Wetherspoons to cut prices next month with beers starting from 99p