Home » Fashion » A year’s trade in a day: bringing shoppers to the bushfire zone

As the bushfire crisis rages on, it's still far too early to predict the total impact it will have on the economy. But one thing is certain: there are plenty of businesses that rely on seasonal trade whose balance sheets have been decimated by the fires.

Tourist towns from Bright to Bermagui that are normally heaving with tourists itching to buy local wares are abandoned, leaving many business owners wondering if they will even surivive until next Christmas.

Enter Turia Pitt, the author and motivational speaker who survived catastrophic burns in a bushfire during an ultra-marathon in 2011. Last week, Pitt and Grace McBride launched Spend With Them, an Instagram account devoted to promoting small businesses directly impacted by the bushfires.

"It started off as just an idea on a Monday morning. We were trying to get back to 'normal' [after the holidays]," Pitt, who lives on the NSW South Coast, said. "We couldn’t focus on anything. We talked about how scared we were for our friends and community and the small business owners in our town who were going to struggle without the summer tourist trade."

Already, the response has been beyond their expectations, with Pitt, who is eight months pregnant with her second child, telling The Age and The Sydney Morning Herald this week it's been "bananas".

The page has amassed more than 170,000 followers. OrganiQ, a clean beauty business from Kangaroo Island, did a year's trade in one day that will go towards rebuilding the fire-ravaged island community. 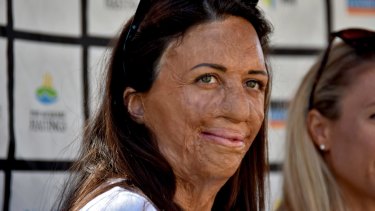 Turia Pitt’s ‘Monday morning’ idea for a page that helps small businesses affected by the fires has had a massive response.Credit:Matt Attard

"Resilience is in our makeup and the island is part of our heart and soul," OrganiQ's owner, Sally Paech, posted on Instagram.

On Tuesday, Paech said the demand had forced the business to temporarily close its warehouse. She said she is working on ways to "create an independent initiative so our funds will go direct to a cause on the island".

"We want to help the island but people are still putting our fires, there is almost no way to gauge what will be required to help rebuild," she said. "The island is known for its bushland, [and] with such a high percentage being burnt out I know it will take [a lot of money] to replant and years to recover."

Aaliyah Topic, founder of organic tea business Earth.Air.Fire.Water, lost a month's worth of income when the Green Wattle Creek fire forced the cancellation of regular markets around her base of Buxton, south-west of Sydney.

On Instagram, Topic said she recouped the lost sales, a portion of which will go to the Rural Fire Service, in just two hours after being featured on Spend With Them.

Many of the businesses featured are reporting their greatest challenge now is keeping up with demand, and have asked the public for patience while they deal with unprecedented logistical issues, especially when many roads and freight routes remain cut off.

Here are five of our favourite posts on Spend With Them (but really, we love all of them):