Home » Fashion » After Karl Lagerfeld, What’s Next for Chanel and Fendi?

Karl Lagerfeld’s death leaves a void atop two of fashion’s biggest names, Chanel and Fendi, and signals a potentially seismic shift on the industry’s creative side at a time of heightened flux in the global luxury market.

Chanel has already named Virginie Viard, a relatively unknown company insider based in Paris, to continue Mr. Lagerfeld’s work. Ms. Viard was the director of the Chanel fashion creation studio and Mr. Lagerfeld’s right-hand woman for more than 30 years.

At Fendi, where Mr. Lagerfeld was named creative director in 1965, the question of succession has not yet been addressed beyond a company statement that a decision on the issue would come “later.” Nor has there been any word about Mr. Lagerfeld’s own brand, which he started in 1984 and which is now partly owned by the private equity firm Apax Partners.

“Today, not only have I lost a friend, but we have all lost an extraordinary creative mind,” Alain Wertheimer, Chanel’s chief executive, said in a statement confirming the German designer’s death. “Thanks to his creative genius, generosity and exceptional intuition, Karl Lagerfeld was ahead of his time, which widely contributed to the house of Chanel’s success throughout the world.” 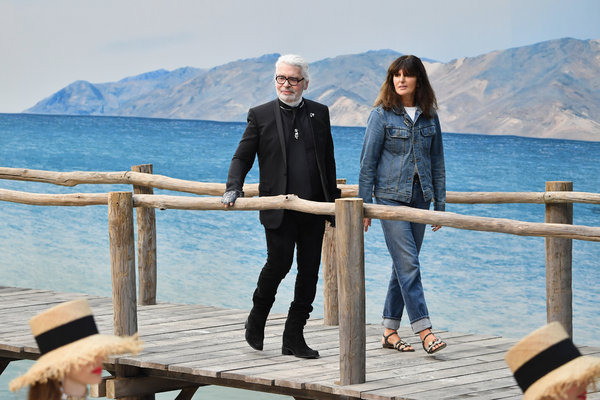 Mr. Lagerfeld, who joined the house of Chanel in 1983, had long been credited with transforming the company into one of the world’s biggest luxury brands, synonymous with blockbuster runway shows and distinctive products like its No. 5 perfume, black bouclé jackets, two-tone ballet pumps and array of quilted handbags.

Just what a powerful industry force the privately held Chanel had become was clear last year, when, for the first time in its 108-year history, it published its annual financial results. Total sales for 2017 were $9.62 billion, 11 percent higher than the previous year on a constant-currency basis, the company reported.

Chanel, the results showed, is outpacing rivals like Gucci and running neck-and-neck with Louis Vuitton, widely considered the industry leader.

Although Mr. Lagerfeld famously had a lifetime contract with Chanel, he was known to be in poor health in recent years, and it was something of a fashion-show parlor game to speculate about who might ultimately take his place at the company. His job was widely regarded as the best in the business, in part because Chanel’s status as a private company with a hugely successful beauty division gave Mr. Lagerfeld a level of creative freedom seemingly unmatched among his peers. Many people privately dreamed of inheriting the mantle.

Among those often mentioned over the years as favorites for the job included star designers like Marc Jacobs (when he left Louis Vuitton), Alber Elbaz (a former creative director of Lanvin), Hedi Slimane (known to be a favorite of Mr. Lagerfeld’s) and, most recently, Phoebe Philo, who was rumored to be waiting in the wings in London after leaving Celine.

In the end, the billionaire Wertheimer family that controls Chanel appears to have opted for continuity over celebrity by picking Ms. Viard, a company stalwart without a global profile or social media presence. According to a statement from the company, the selection will ensure that “the legacy of Gabrielle Chanel and Karl Lagerfeld” can live on. Ms. Viard is both the safest and most respectful choice.

Mr. Lagerfeld seemed to have been laying the groundwork for the decision for some time, increasingly bringing Ms. Viard onto the runway at the end of shows to take a bow at his side. In January, after Mr. Lagerfeld failed to make his customary appearance at the end of Chanel’s most recent couture show, the company said in a statement that he was “feeling tired” and had asked that Ms. Viard “represent him and greet the guests.”

All eyes will now be on her to see whether she can extend what has been one of the modern luxury industry’s longest bull runs ever, and whether she will choose make her own mark on the brand or remain a low-key, behind-the-scenes presence.

Moves to secure Chanel’s long-term financial future have also been afoot in the boardroom in recent months. Last year, the company announced that it had established a new holding company based in London, Chanel Limited, as part of an effort to bring all its businesses and 20,000 employees under one roof and to simplify a legal and organizational structure in place since the 1950s. As a result, while the luxury industry is in mourning this week, many observers were confident that Chanel would withstand Mr. Lagerfeld’s death.

“We saw last year that the Chanel business is formidably strong and benefits from its huge marketing investments,” said Luca Solca, senior luxury analyst at the United States analytics firm Bernstein. “It is also a more balanced business than most, commanding appeal both at the high end, for example, with its couture business, and at the entry price points with its beauty lines, giving it a broad base.”

“Karl is leaving huge shoes to fill,” he added. “But Chanel is a formidable brand with a significant talent pool internally and a huge appeal in the market.”

As for the other companies affected by Mr. Lagerfeld’s death, from his own fashion line to Fendi, which is owned by LVMH Moët Hennessy, the world’s largest luxury goods company, what happens next remains to be seen. On Tuesday a statement from Fendi, a house based in Rome that is a fast-growing star of the LVMH portfolio, called his death “an unimaginable loss.”

“Karl Lagerfeld has been my mentor and my point of reference,” said Silvia Fendi, the creative director of men’s wear, accessories and children’s wear. “A blink of an eye was enough to understand each other.”

“For Fendi and myself,” she added, “the creative genius of Karl has been and will always be our guiding light, molding the maison’s DNA.”

Mr. Lagerfeld’s last collection for the brand will be shown on Thursday in Milan.

Elizabeth Paton is a reporter for the Styles section, covering the fashion and luxury sectors in Europe. Before joining The Times in 2015, she was a reporter at the Financial Times both in London and New York. @LizziePaton

Vanessa Friedman is The Times’s fashion director and chief fashion critic. She was previously the fashion editor of the Financial Times. @VVFriedman

Alice Cooper explains 'death pact' with wife: 'We have a life pact'

WeWork says it has 527,000 ‘memberships’ but that’s not as straightforward as it seems