Is Celeste Barber the face of Tom Ford now?

That's what some people are asking after the Australian Instagram comedian was featured in additional comedy videos released by the US designer. 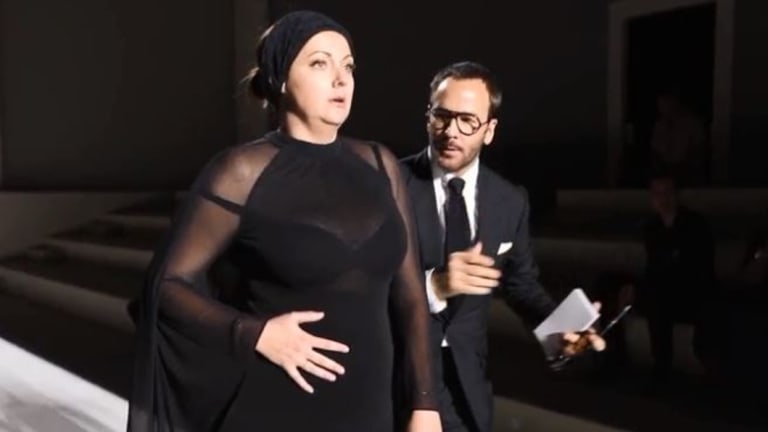 Celeste Barber is coached on the runway by Tom Ford in another collaboration between the unlikely pair.

The three videos, posted to Barber and Ford's respective Instagram accounts on Thursday morning, show Ford teaching Barber how to walk in his shows, while she attempts to sneak some of the clothes home in her bag.

In the videos, a straight-faced Ford confronts Barber in her control underwear, assisting her to "hop" into his shoot's tiny, sample size skirts, before eventually securing her in the creations with duct tape so she can give them a spin on the runway.

"I used to dance, can you tell?" Barber asks Ford.

The videos come after the pair collaborated on a previous comedy video featuring Ford, who is gay, and Barber vigorously making out in an airport terminal. The video played at the after party of Ford's show, which opened New York Fashion Week last week.

Neither Barber or Ford have offered an explanation for their new professional relationship.

Celeste Barber first found fame on Instagram in 2015, gaining a cult following for her pictures parodying the glamour social media shots of celebrities.

Using the hashtag "#celestechallengeaccepted", the Central Coast mother and stepmother of four made fun of the Kim Kardashians and the Kate Hudsons of the world by jokingly recreating their absurd poses and props.

Ford and Barber's paths first crossed in February, when Barber (who now has 4.7 million followers) posted a video spoofing one of his campaigns to her Instagram account.

The video was shared widely, including by Ford, who re-posted it to his own account.

Speaking to Good Weekend earlier this year, Barber said she had been offered a chance to work with Ford, although she was coy on the details.

"One of his people emailed me directly, asking if I could meet with him. You know that notification sound you hear when you get an email? Well, that sound hadn't even finished before I replied. And his person – Charlotte – wrote back, and she was like: 'Wow. That was quick.'"

But, despite her recent turn on the runway, Barber made it clear in her Good Weekend interview that modelling is not her end game.

"I'm very clear about what I'm doing. I'm making people laugh, I'm going into that perfect Insta world as me. I am not going to become a Tom Ford model. That's not the end game. I'm one little lady, fighting a very big machine."

Prince Harry has just revealed one of his favourite baby names… so could it be a clue for the royal tot?

‘The View’ Staff ‘Stressed Out’ After Paula Faris And Sara Haines Departures, Per ‘Closer Weekly’