There is tension in the climate, a penetrating aura of frustration that seeks to buck the patriarchal status quo. The surge began in 2016 with the U.S. presidential election and the rise of movements like #MeToo and Time’s Up as a result of men in power, who for so long, acted lasciviously without consequence. Fashion took note and, more importantly, took a side immediately, with many labels presenting collections during the fall of 2017 that trumpeted equality, diversity, and empowerment for all. The swell of revolt, perhaps regrettably, has since subsided—but not for Maria Grazia Chiuri.

As the creative director of Christian Dior, a role she has held since 2016, Chiuri has consistently promoted feminist ideologies. Her inaugural collection showed tees with the slogan “We Should All Be Feminists,” eschewing the high-octane drama of her predecessors. She’s the first woman to hold the title, one of the biggest jobs in the industry and one that wields tremendous influence. And it appears that, season after season, she’s using this reach to enforce issues surrounding women’s rights.

At times, Chiuri does this subtly, i.e., Dior’s recent couture collection that showcased Greco-Roman gowns inspired by the oeuvre of artist Judy Chicago. Though, more often than not, she heralds the feminist message prominently and unabashedly. Her most recent presentation for the fall 2020 season followed the latter sentiment (one that is certainly timely, considering the announcement of Hollywood executive Harvey Weinstein’s rape conviction yesterday). 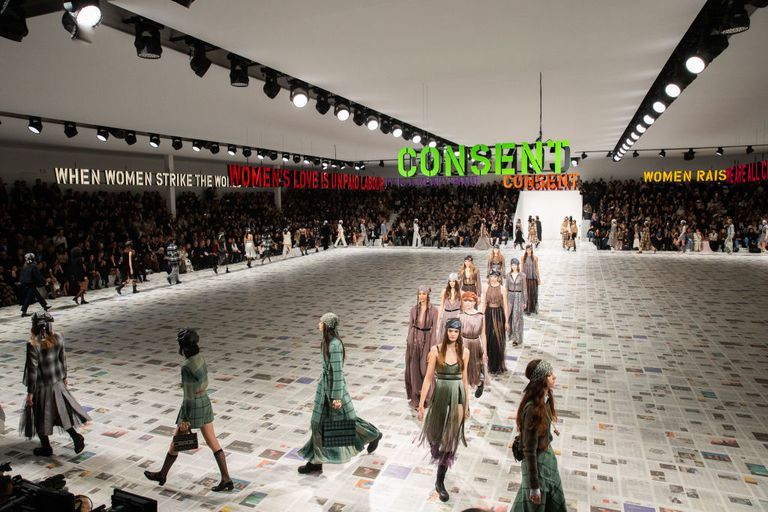 Held in a makeshift space at the Jardin des Tuileries, the presentation’s political leanings were made apparent at the onset. Along with the phrase “I Say I” emblazoned at the entrance, the venue was packed with large neon signs that read, “Consent,” “Women Raise the Upraising,” “Patriarchy = Climate Emergency,” and “Feminine Beauty Is a Ready-Made.” They were all works created by Claire Fontaine, a collective of feminist artists who take after Marcel Duchamp, producing installations, videos, and infographics that use satire to speak truth to power.

Indeed, ready-made, an art term that signifies repurposed objects and is closely linked to Duchamp, also refers to ready-to-wear, pieces that are made in standard sizes for the masses to consume. And despite the fact that Dior’s wares are too costly for most, the idea behind Chiuri’s collection, like high-priced artworks, is one that can be disseminated and appreciated by all.

We’re kicking off #PFW with @dior by @mariagraziachiuri. The designer set the scene with artwork by collective feminist artist #ClaireFontaine in the form of illuminated text-based signs meant to underscore contradictions within society. ? @nicolefritton

This was reflected in the ease of the silhouettes: relaxed yet refined suits, streamlined V-neck dresses, loose trousers, and baggy distressed toppers. Overt sexually, to be sure, was at a minimum. Even a look that had a diaphanous blouse that featured a bra top underneath conveyed nothing wanton about it. Nay, it represented a woman on the go, unencumbered by societal dictates, who dresses for herself and not the male gaze. The color palette of black and white, and muted brown, green, and red tones, and abundance of check patterns also reflected a powerful worker’s sensibility (albeit a handsomely paid one), along with the bandanas that called to mind scenes in Urinetown and Les Misérables, two dramas that comment on societal bureaucracy.

For Chiuri, fashion is meant to reflect the times we live in. And in this particular period, she sees little space for grandeur and opulence. Her Dior is grounded in reality, one that sees apparel as a tool that can—even by the smallest measure—stimulate change.

Will Zendaya Return for Season 2 of HBO's 'Euphoria'?