Flashy engagement rings, public displays of affection and leaked sex tapes have been superseded by commitment couture as the favoured move of celebrity couples. Matching outfits are now the tailored tool for communicating eternal love, with the trend trickling down to regular lovebirds yet to get their 15 minutes of fame. 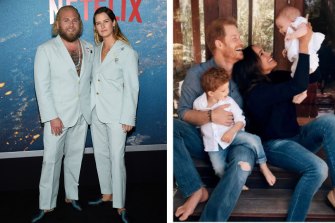 Actor Jonah Hill and girlfriend Sarah Brady signalled the return of same-same style in pale blue Gucci suits at this month’s premiere of the Netflix movie Don’t Look Up, before the festive season sent twinning into overdrive. Prince Harry and Meghan jumped on board with “they’re just like us” matching denim looks on their Christmas card, while singer Meghan Trainor and actress Kate Hudson posted couple pictures to Instagram in matching onesies.

“There definitely has been a surge in couples dressing the same,” says relationship and life coach Megan Luscombe. “Dressing the same is no longer just accepted, it’s encouraged. It’s all over social media. I even received a photo Christmas message from a client with her husband in matching Hawaiian shirts and shorts. It conveys unity and family. Many couples love showing this fun side of themselves.”

More than 20 years ago, the look was considered a punchline rather than a power move. David and Victoria Beckham wore matching leather Gucci outfits to a Versace party in 1999, becoming the butt of jokes still revived by late night television hosts.

“It just seemed like a really good idea at the time, you know? It really did,” Victoria said on The Tonight Show Starring Jimmy Fallon, in October. “I think it was a naivety then. We didn’t know about fashion. We were just having fun with it, which, to be honest with you, is kind of the way it should be.” 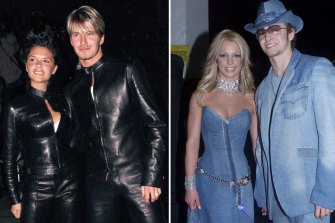 Victoria and David Beckham wearing matching Gucci leather suits in 1999 and Britney Spears with Justin Timberlake in denim at the AMAs in 2001.Credit:Getty

In 2001 Britney Spears and her then-boyfriend Justin Timberlake were similarly naive, committing to a complementary approach in top-to-toe denim at the American Music Awards. “You do a lot of things when you’re young and in love,” Timberlake remarked on the look to former NSYNC bandmate Lance Bass on the Daily Popcast podcast in 2020.

At the turn of the millennium the trend failed to stretch beyond the red carpet, but now social media allows more people to experience the dopamine rush of celebrating a successful romantic partnership with pairing prints instead of #couplegoals. 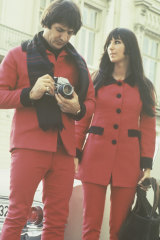 “No one is dressing up the same and not sharing it,” Luscombe says. “It’s a bit of a brag moment. It’s great when it’s fun. It can become a problem when you have to do it, and it’s about controlling people’s perception of you.”

The diminishing divide between men’s and women’s fashion, championed by Gucci, Joseph Altuzarra and Australian designer Dion Lee, is fuelling the fun. In the ’60s, Cher and husband Sonny Bono’s matching costumes predicted the clothing racks of today where silhouettes, prints and embellishments are applied to all clothing, with minimal regard to gender.

“It’s the way the market has been shifting,” says Melbourne stylist Carlos Mangubat, who has worked with Harper’s Bazaar, L’Officiel and Town & Country magazine. “Brands want to show that clothes are genderless. Now the girl no longer has to borrow her boyfriend’s blazer. It’s the same look and the same cut, but it’s hers. From a branding perspective, it’s strong.”

While the shift towards genderless fashion has emerged from queer culture, same-same dressing is currently not as popular with same-sex couples, failing to resurface since actress Anne Heche and Ellen DeGeneres relentlessly co-ordinated throughout their ill-fated relationship in the late ’90s. 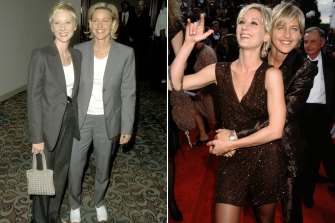 In the late ’90s Anne Heche and Ellen DeGeneres made an impression in matching outfits on the red carpet.Credit:Getty

Luscombe differentiates between the mirroring technique utilised by Jonah Hill and Sarah Brady and merging, which is commonplace with LGBTQI+ couples.

“For the first six years my wife and I were constantly being asked if we were sisters,” Luscombe says. “Merging is where you start dressing similarly because you admire and are attracted to one another. It can be a sign of trust, but it’s not intentional. You dress separately, leave the house and realise you’re both in the same look. It happens a lot.

“Matching is when you are consciously putting matching clothes on. It’s typically more straight people,” Luscombe says. “For the moment.”

The Sex And The City Revival Is Official! Here We Go!

‘Mean Girls’ Cast: Where Are They Now?

What You Don’t Know About Helena Bonham Carter