Home » Fashion » From raising one child to a brood of seven, two mums compare family life and reveal why living with such different-sized households works for them

From raising one child to seven (yes, seven!), two mums with very different-sized broods reveal why it works for them 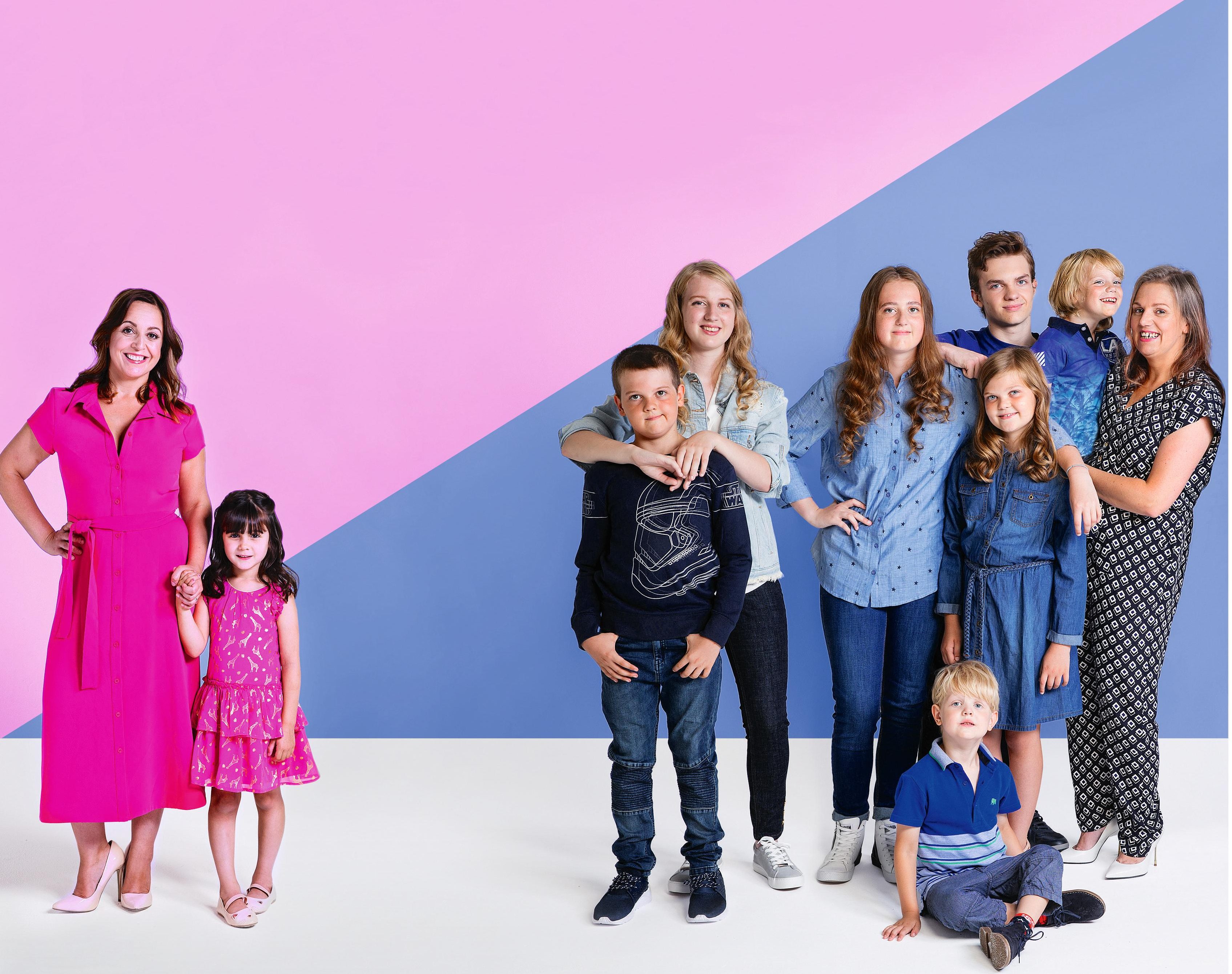 Tracy Buchanan, 41, is an author and lives with husband Rob, 38, and their daughter Scarlett, five, in Milton Keynes.

“Watching Scarlett playing hide and seek with her cousins, for a brief moment I wondered what it would be like for her to have a brother or sister.

"But back home later that day, as she brushed her doll’s hair, I felt reassured that the calm atmosphere proved I’d made the right decision – our family was complete with just one child.

"I’ve always wanted children, but there was a time when I wondered if it would ever happen. Rob and I married after five years together in June 2007, and immediately started trying for a baby. But each month my period arrived. After 18 months I went to my GP and had a load of tests which eventually confirmed the worst – I had unexplained infertility. Ever the optimist, I told Rob we would have our baby. "Our first two rounds of IVF in September 2010 and May 2011 ended in failure. I tried to imagine my future without a baby, but it seemed unthinkable. My feelings would alternate between desperation and total numbness. I eventually turned to creative writing as an outlet for my emotions, and by October 2012 I’d earned enough from writing to pay £10,000 for IVF at a private clinic in London. Eleven days after I had my embryos implanted, I took a pregnancy test. When it turned positive, I started to shake. Rob and I hugged – we were both so nervous and excited.

"While getting pregnant had been a five-year battle, pregnancy was surprisingly easy. I even have fond memories of the birth on June 8, 2013 – I had a C-section, because the baby was transverse. "As soon as I saw Scarlett, I cried to myself: ‘I’m a mum.’ In those early weeks, I’d take her into the nursery for night feeds and as I’d look into her eyes I felt so lucky I finally had everything I’d ever dreamed of.

I know some people will insist she’s spoilt as she’s an only child, and I suppose she does get more from me and Rob – more time, attention and money

"By the time Scarlett turned 18 months, friends were getting pregnant with their second baby, but nothing was further from my thoughts. Having done IVF I knew I could do it again, but the truth was, I was enjoying Scarlett too much. I did worry I was being selfish, so asked Rob one night if he wanted any more children. To my relief, he admitted he was happy with the family we had. So a few weeks later, we sold the cot, pram and other items. Far from feeling sad, I felt relieved.

"Of course there have been moments when I’ve doubted our decision. When she turned three, Scarlett starting asking when she’d have a little brother or sister like her friends. I explained we could spend more time with her if she was an only child. I’m not sure how much she understood, but she smiled and cuddled me.

"Now she’s five, and those friends’ siblings are toddlers. Sometimes she complains they snatch toys and take up a lot of attention, which is funny. I also try to make sure she’s never lonely by arranging play dates. I know some people will insist she’s spoilt as she’s an only child, and I suppose she does get more from me and Rob – more time, attention and money. "I’ve never worried about it, though. We’re just doing the best we can for her, but isn’t that what every parent does, whether they have one child or lots? And for those who think it means all the responsibility will be on Scarlett to look after us when we’re older, I refuse to see my child as an insurance policy for our future. Anything could happen and I hope Scarlett never feels we expect her to look after us – I wouldn’t put that burden on any child.

"I also don’t think I could cope with the chaos a big family brings. When I see large families I just feel one thing – relief that it’s not me having to look after them all. I did wonder when I hit 40 if broodiness might take over, but it didn’t happen.

"With each year that passes I get more certain we’ve made the right decision. Scarlett is at school and I’m enjoying being able to have proper conversations with her – even if it’s about superheroes! "And Rob and I have so much more time for each other, which we wouldn’t have with other kids in tow. Being a one-child family is definitely the best decision we ever made.”

Mandi and her 7 children

“As all nine of us walked down the street one day, a stranger barked: ‘Haven’t you heard of contraception?’ I was horrified, but my husband Asa smiled at the woman. I suppose it’s unusual for a couple to have seven children – more often it’s the result of a blended family. But Asa and I have been together since meeting in 1996, when we both had summer jobs at the local leisure centre. "Although I only have one sister, I’ve always loved kids. I began babysitting at 14 and did a degree in childhood and youth studies. Thankfully, Asa was keen on a big family, too – although we didn’t discuss how big!

"When we had our daughter Xene in April 1998, parenthood was all-consuming, but enjoyable. As I breastfed, night feeds fell to me, but with everything else Asa would help out when he wasn’t working. In April 2000 our son Lochlan was born, and two was definitely more difficult than one. But while it was exhausting, I just got on with it. I knew friends and family presumed that with one of each we’d feel our family was complete, but we didn’t.

"Neva was born in April 2003, Kaide in September 2005 and Eowyn in November 2008. Five children might have seemed a lot, but the other kids made it easy – they were ready-made playmates and the older ones helped with the youngest. I juggled caring for them with working in a nursery, and of course at times it was chaos, but I’m the type of person who thrives on noise and laughter, and the children do as well.

As all nine of us walked down the street one day, a stranger barked: ‘Haven’t you heard of contraception?

"When I was pregnant with our sixth child, Tyrus, in 2010, I met a friend for coffee one morning. When she realised we were having another baby, she sighed and said: ‘Not again.’ I was so shocked, I couldn’t reply. But back home, I realised if she couldn’t accept my children then we couldn’t be friends, and I haven’t spoken to her since.

"With six children, the logistics of juggling work with school, nursery and pre-school was too much, and Asa and I agreed I’d give up my nursery job and start blogging about life as a mum to six. It was my way of answering questions about bigger families, such as what time I go to bed and get up (midnight and 6.45am) and how many loads of laundry I do a day (three – but it is a 13kg machine). For the most part, I get supportive comments, but I have been called a scrounger on Twitter – even though it’s not true! I don’t like confrontation so ignore it, but Asa bites back every so often. As far as I’m concerned we’re a happy family and that’s what counts.

"Even with six kids, we weren’t done. In September 2013 Viggo was born, and I finally felt we’d hit the magic number. For the first time, we discussed contraception and made sure we were covered. Of course, nothing is 100% and if I fell pregnant we’d adapt, but it’s definitely not part of our plan. "After 20 years of parenting I’ve seen a lot of change, from when to wean to the ‘must-have’ pram. I think I’ve got our routine down to a fine art. At 6.45am I have a cup of tea then get the kids up. Asa helps, but he’s often at work early. I have a wardrobe with school uniforms on colour-coded hangers for each child. Everyone is dressed and fed by 8am, before being dropped off at school. "Once a week I do the ‘big shop’ which costs £300 and involves two trolleys, plus 30 pints of milk and four loaves of bread. By 3.30pm everyone is home and the chaos starts!

"Asa and I work from home, but we tend to only chat about work then. So with the children returning to school, we’re planning a lunch date once a week. I can’t wait!

"I don’t believe our kids have missed out financially and we have a four-bedroom house, so there’s one for the girls, one for the boys, one for the eldest and one for Asa and me. They have tons of toys passed on by their siblings and we make sure they get one-to-one time with us, like taking Neva to the cinema or walking the dog with Xene. But while it’s nice to spend time with just one, I wouldn’t want it permanently. That’s why I say to anyone who judges us that I know we made the right choice. For us, big is better.”

‘The Bold And the Beautiful’ Casts Diamond White In Key Role