Home » Fashion » How we survived an all-nighter with ghosts, ghouls and 'whispering' spooks in UK's most-haunted Ettington Park Hotel in Stratford-upon-Avon

The only problem is I’m not away on a romantic break — I’m sleeping alone in the country’s most haunted hotel.

Ettington Park Hotel, in Stratford-upon-Avon, Warks, is where one of the all-time scariest movies — 1963 classic The Haunting — was filmed.

Now Netflix follow-up The Haunting of Hill House is out and is scaring viewers to the point they are throwing up, having anxiety attacks and passing out.

And I discovered Ettington Park is just as terrifying in real life. There have been sightings of ghosts, floating objects and the spooky sound of footsteps in the night.

But far from putting people off, local historian John Hodges says the ghosts are the main attraction for guests from around the world. 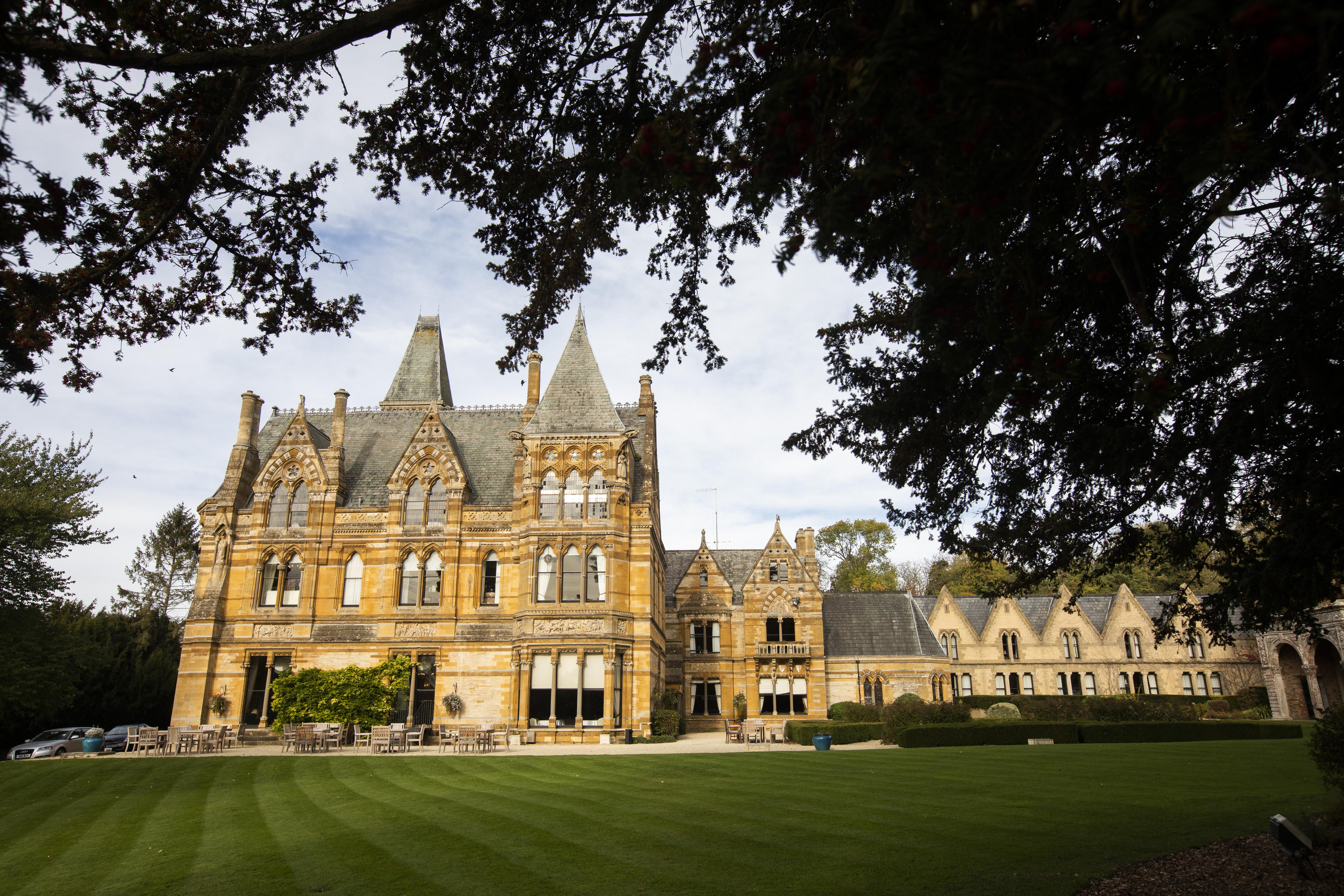 He told me: “There are 21 ghosts. People have died on the grounds — bodies are buried on site. Ancient headstones stand next to ruins in the garden along with a pet cemetery. It’s these features that attract people.”

I wouldn’t say I was “attracted” to staying at the Neo-Gothic four-star hotel days before Halloween, but in the name of research I did, along with ghost hunters Christopher Chell and Dan Wain.

And my chilling experiences left me in no doubt that we and our fellow guests were not the only beings there that night.

Receptionist Wiktoria Birylo explained that Room Six is the most haunted and perfect for my paranormal investigation.

She said: “We have a red cord in the bathroom. 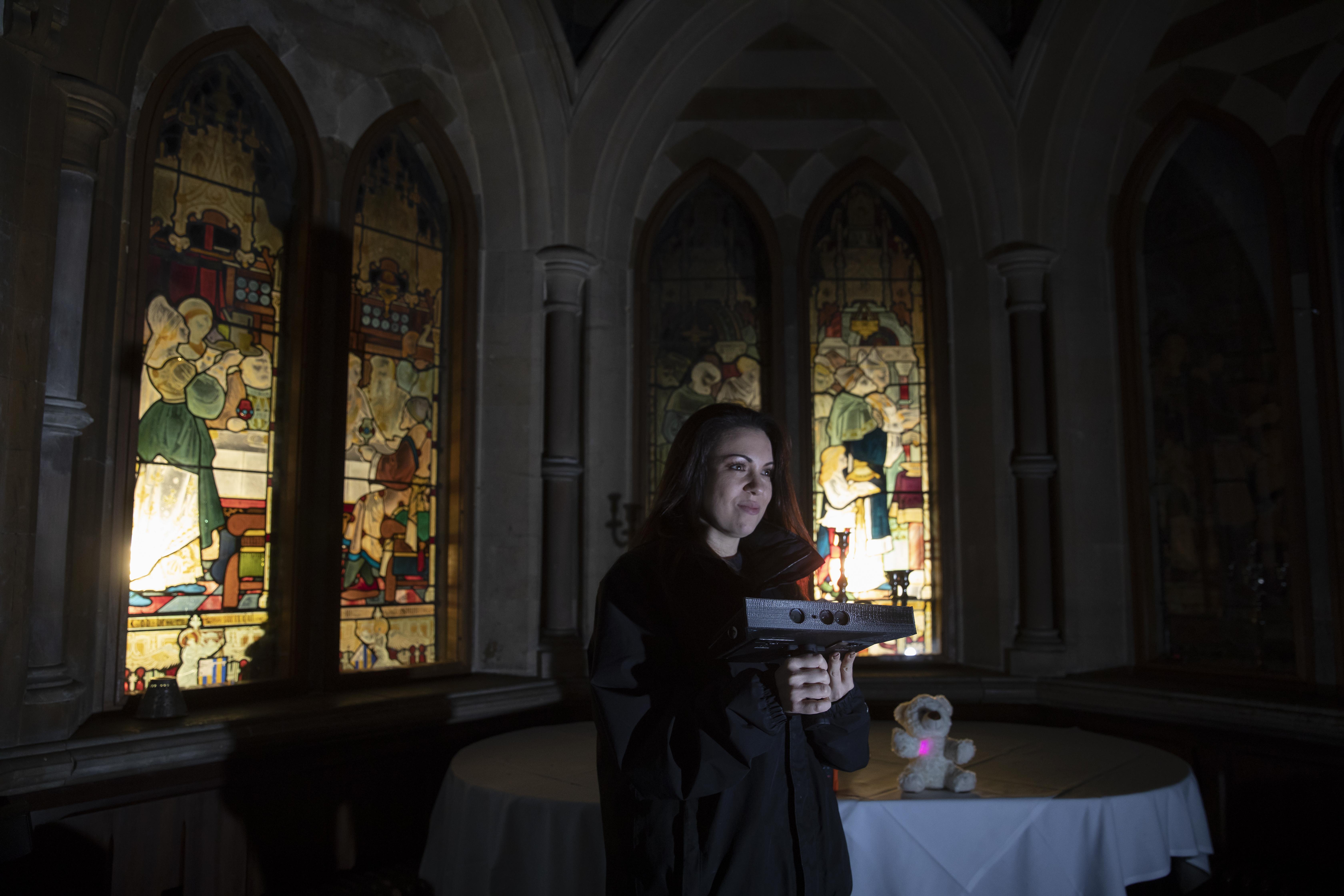 “If you need assistance, just pull it and a light flashes in reception to let us know you need help. But I often see the light flashing for this room when there’s no one there.”

Within minutes of arriving in the large, cool room, our experts got a ghost “hit”.

The camera detected adult figures, the lights on the ceiling started flickering and the other devices, which detect movement, clearly showed activity.

Dan said: “Without a doubt there are ghosts in here. We often have to wait hours to get detection on one machine. This took minutes. I’m not surprised this has been named the most haunted hotel in Britain.” 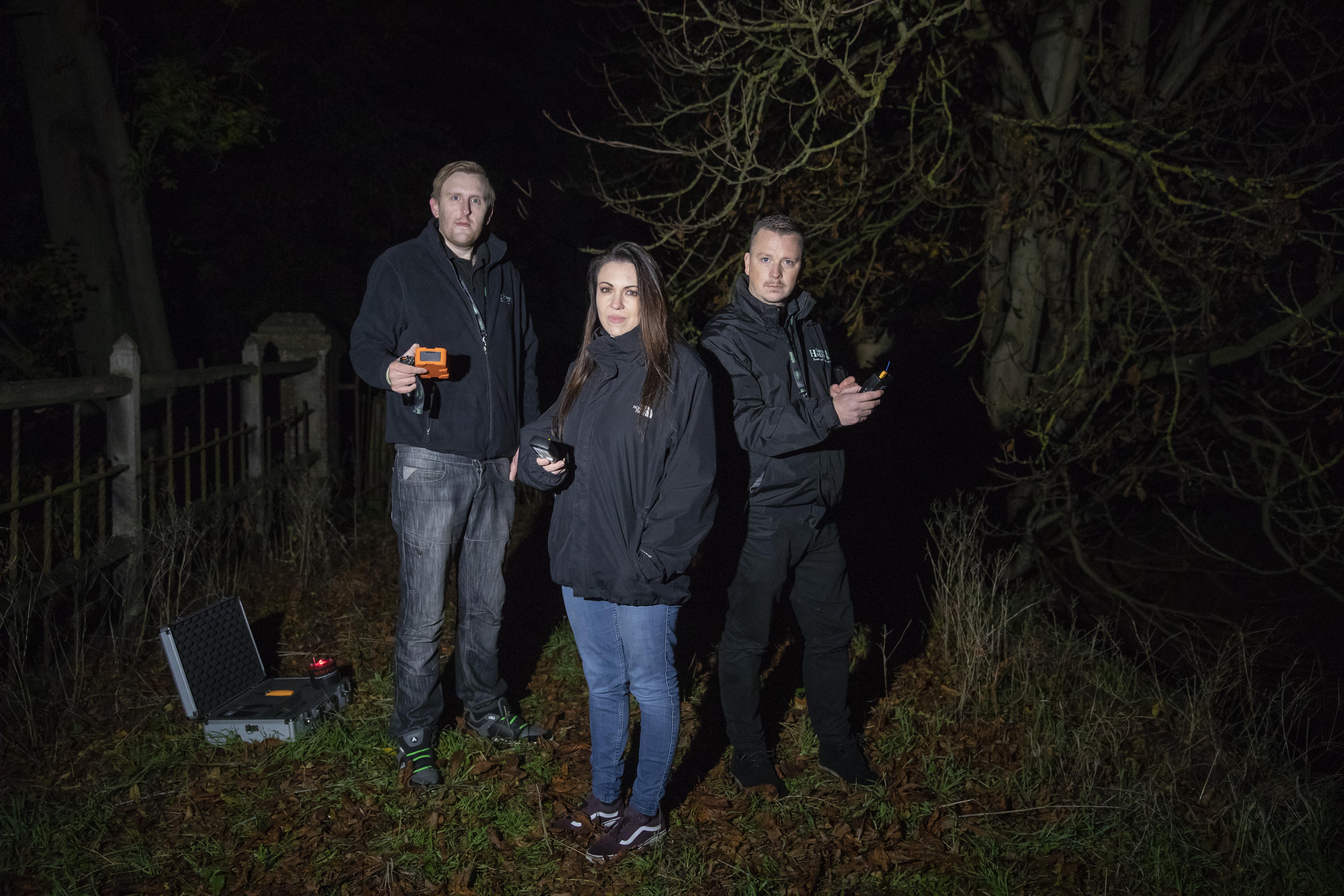 The long gallery, old chapel and library are believed to be the most haunted areas so Chris, 37, and Dan, 32, who run Haunted Houses Events, investigated.

They were armed with some hi-tech ghost-hunting kit — cameras that detect spirit forms that can’t be seen with the naked eye, readers which sense electromagnetic fields and temperature gauges to reveal tell-tale cold spots that may show the presence of a spirit.

The long gallery, with its arched timber ceiling, was designed as a museum for the aristocratic family who lived here until 1904. 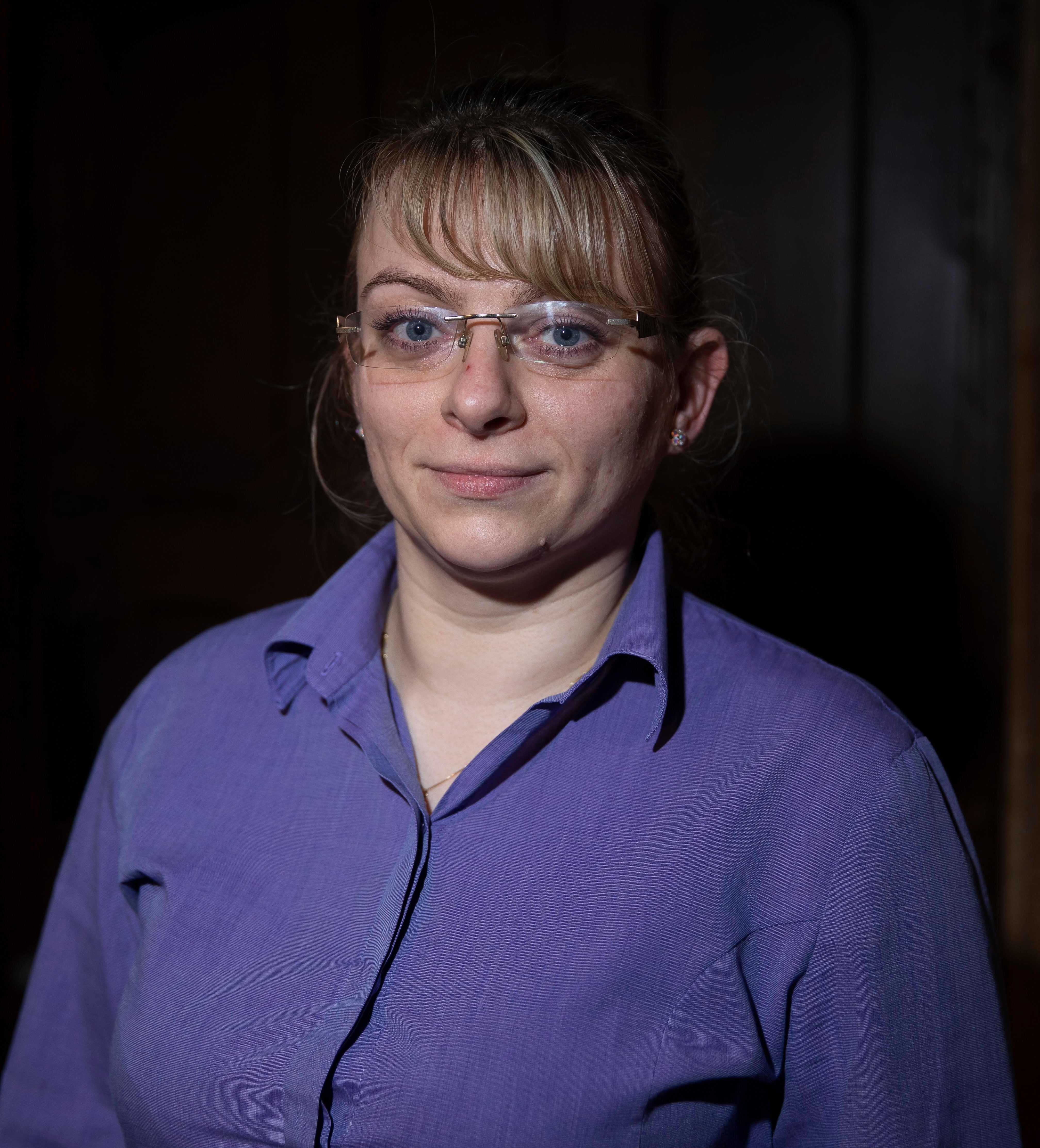 Ghosts of an Army officer and an elderly lady are often seen here.

The family still own the hotel and their deceased relatives are believed to be the resident ghosts.

Mitchell Keyes, 27, a barman there for two years until leaving to start university, said he never felt comfortable in the gallery.

He explained: “You can tell something is different.

“I was working in another part of the hotel one night when this woman in hysterics said her children could hear voices. I knew what room she meant straight away.”

Next we went to the library. 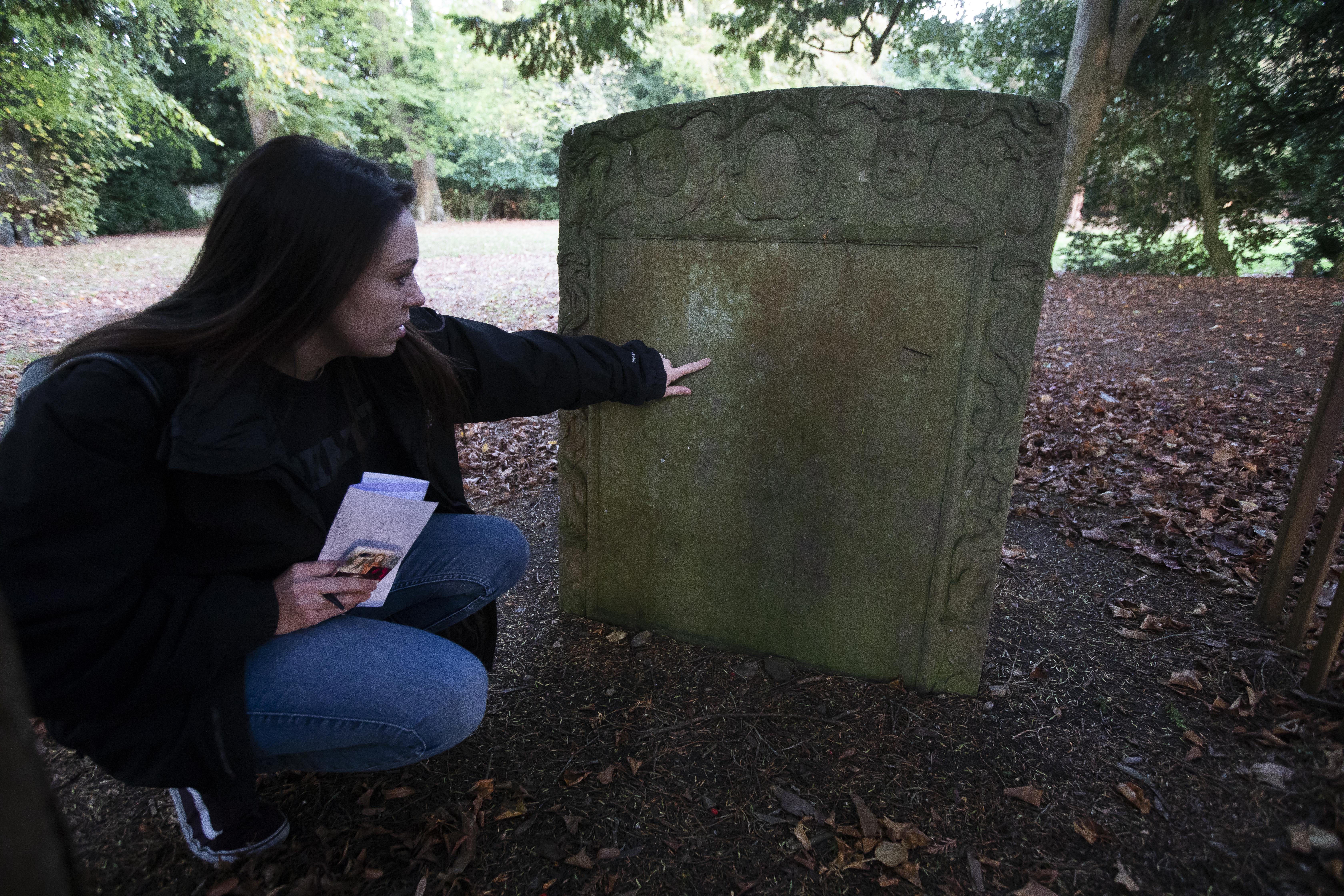 Here, Sir Walter Scott’s book St Ronan’s Wells often flies off the shelf and always opens at the same page, which reads: “A merry place, ’tis said in yore; But something ails it now — the place is cursed”.

The original was stolen so local historian John Hodges, who is writing a book about the history of the haunted hotel, replaced it in August while conducting research.

When I pulled out the title, I turned to the notorious page — it was blank.

John said: “This is so strange. The text was definitely there when I left the book at the hotel. 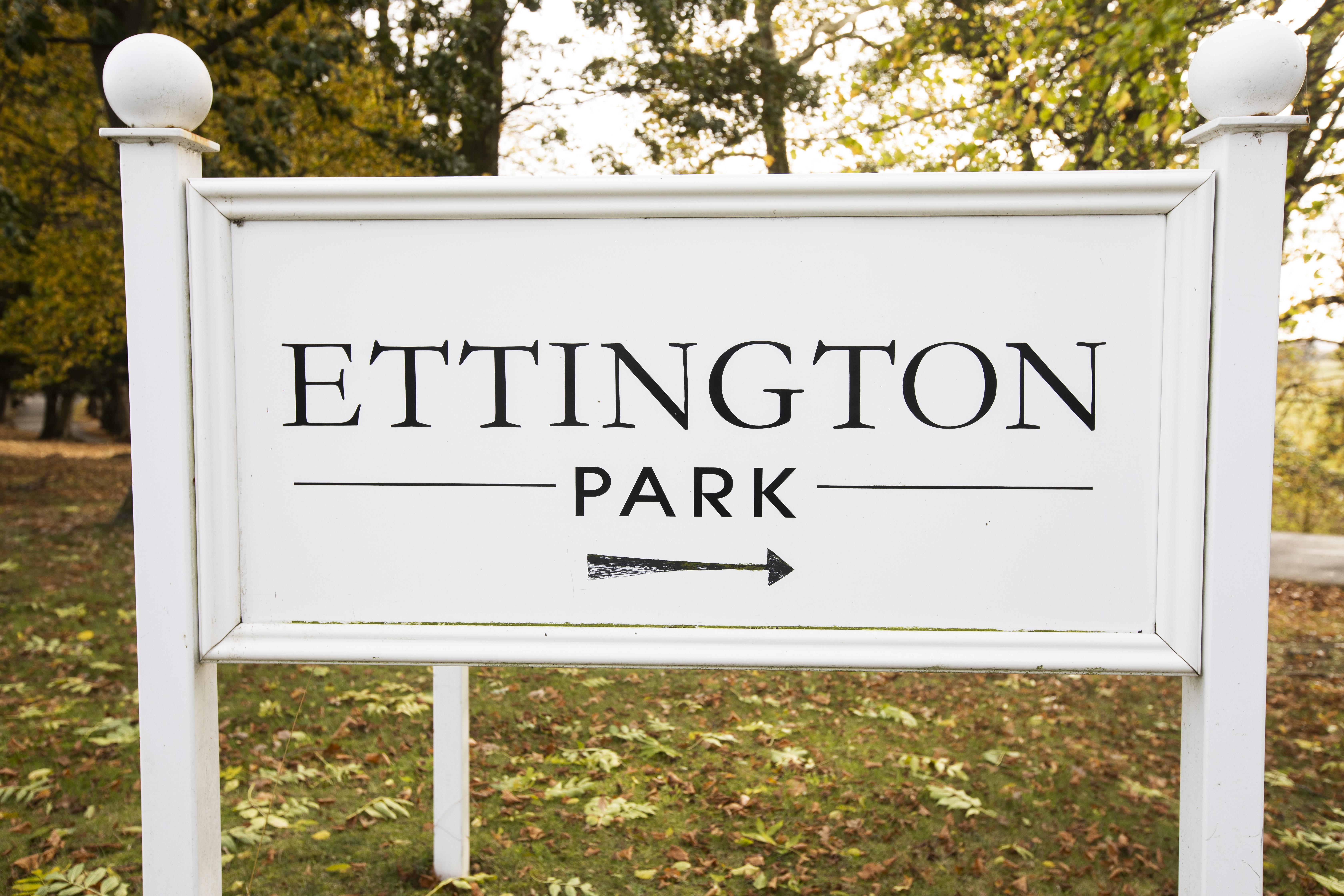 “The words are only missing from that page. There are things that happen here that you can’t explain.” We then moved into the chapel, which has stained-glass windows and the remains of an altar.

Wiktoria had already warned us: “I’ve been told children were once killed in there. I avoid going in there, I have smelt a dead body.”

She was right — this room was terrifying.

“I could feel the chill as soon as we walked in and the camera detected the outline of several small children, jumping by the stained-glass windows.

Dan said of the footage: “It looks like these children are trying to escape through the windows.” 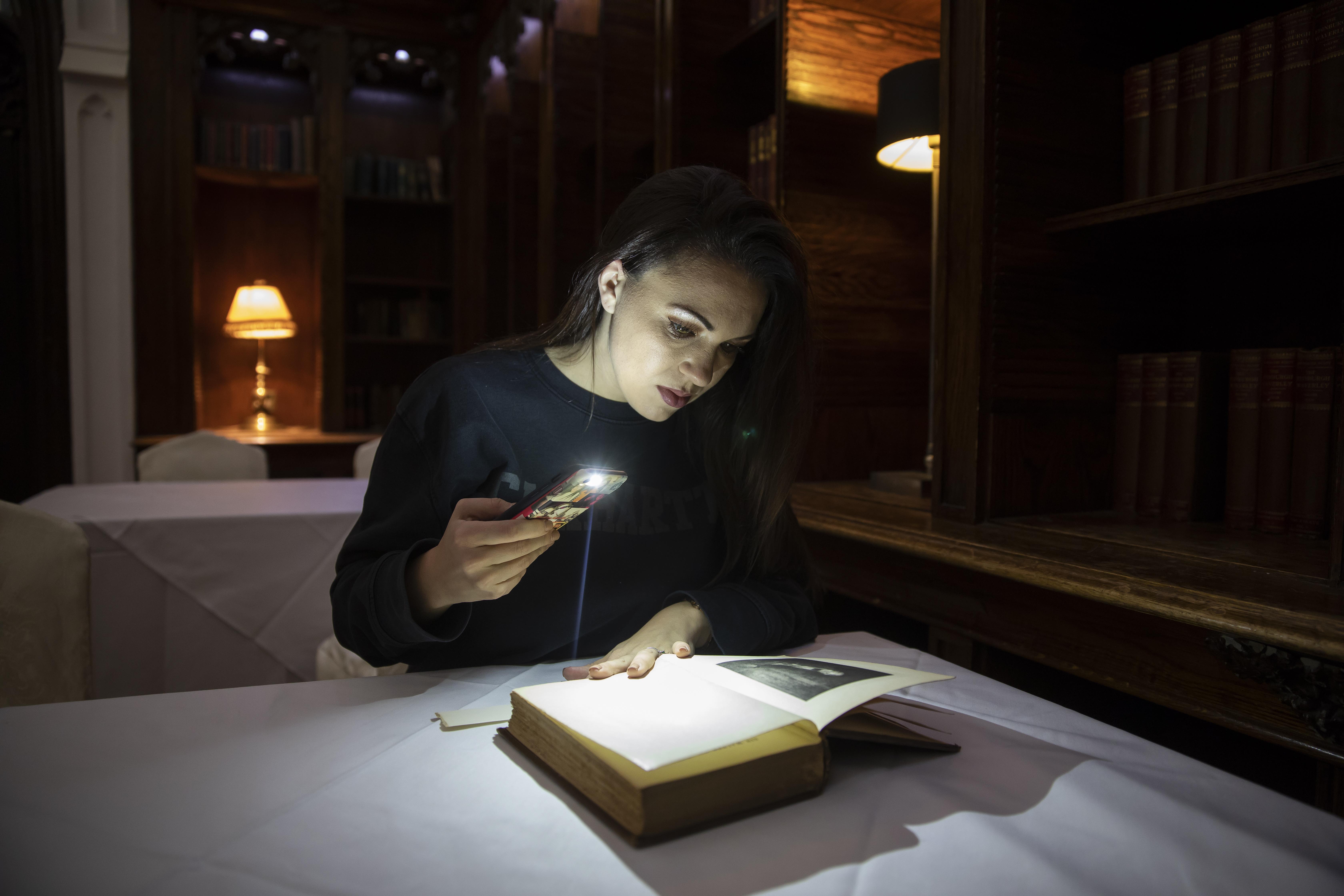 Chris added: “There’s definitely something there. Ettington has a lot of history, which is important when it comes to hauntings.

“The library was very interesting. That room had a certain feel, like you were being spied on.

“The chapel was also interesting. You can use the camera for hours and not pick up anything, so the fact that it detected the images of children standing by the windows was fascinating.

“It’s haunted and I would love to go back to investigate further.” We later discussed our findings with Steve Parsons, from paranormal research organisation the Society for Psychical Research.

IS THIS IMAGE OF CHILD GHOST 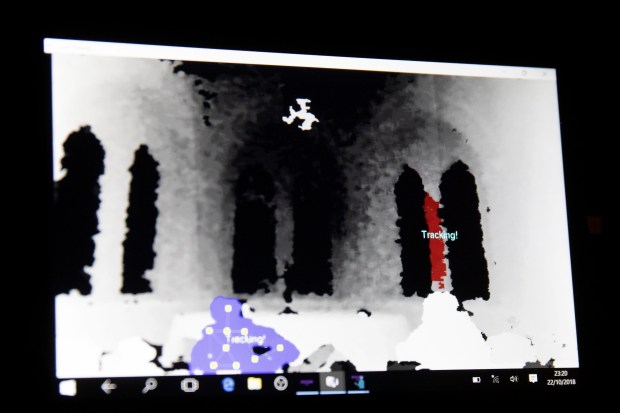 I could feel the chill as we walked in.

The  camera detected the outline of  small children, jumping by the stained-glass windows.

Ghost expert Dan said: “It looks like they are trying to escape.”

He said: “The fact the camera was doing one thing, the magnetic field meters were doing something else and the lights were flickering, is very compelling.

“Your experiences of noises and voices are not uncommon from those experiences of other people who have stayed there, so it adds weight to, well, there might be something going on.”

When I finally turned in I realised there was ghostly goings-on in the rooms too.

I was already dreading going to bed after guest Mark Hellberg, 53, a building contractor from Kent, warned me: “The hotel seemed lovely when I checked in but I couldn’t sleep and was just laying in bed when I saw a light under the bedroom door. 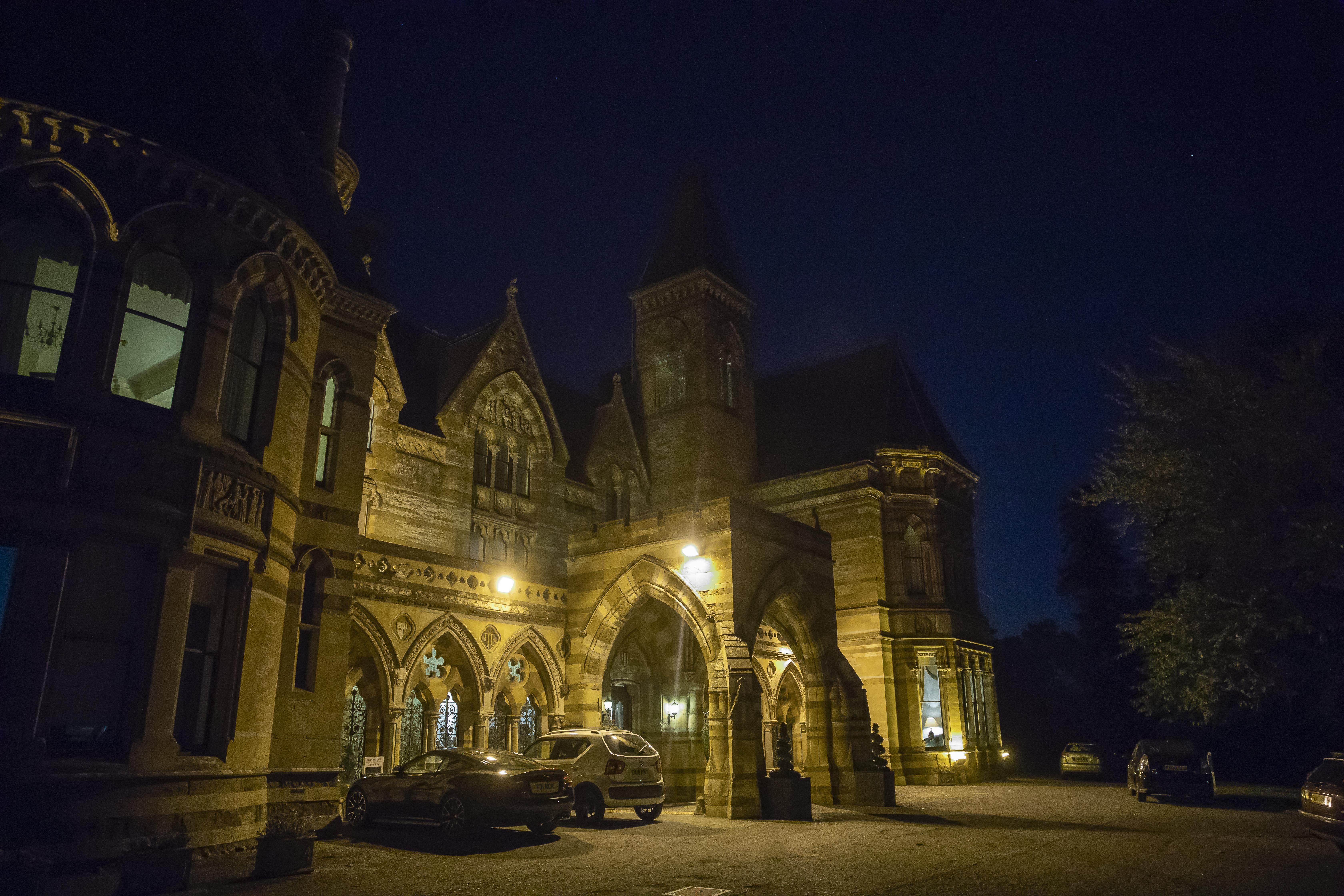 “Goodness knows why, but I got up and opened it.

“I saw this woman standing there, screaming, but there was no sound.

“I was really freaked out.

“I had no idea the hotel was haunted when I booked. Once I was back home, I kept waking up and seeing that same woman at the foot of my bed.”

My bedroom appeared lovely too, a generous size, on the top floor and with a gorgeous view over the grounds.

On the bed was a cuddly teddy bear — which I clung on to. 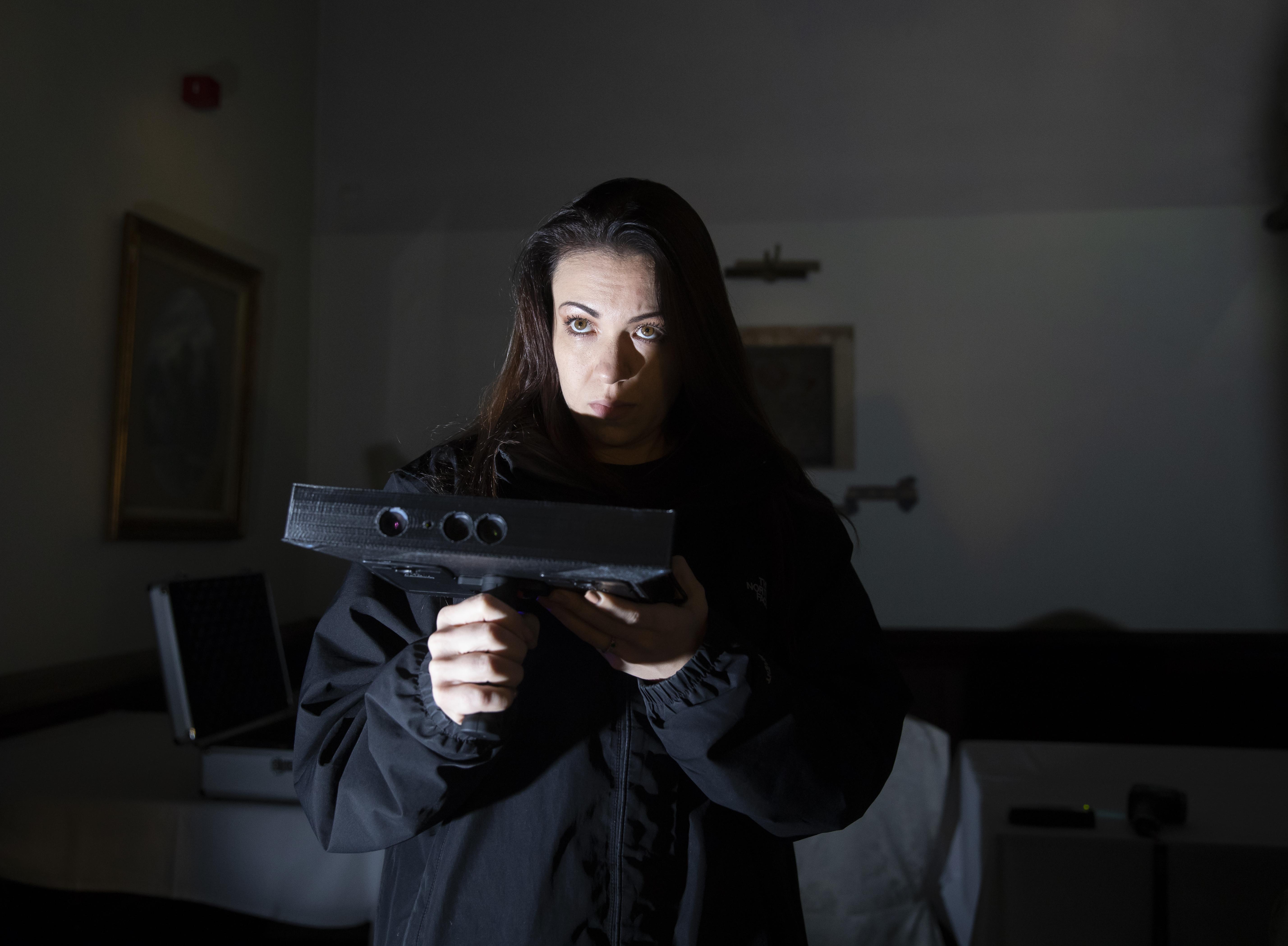 It was a beautifully decorated room but eerily quiet. And although I was shattered I didn’t change into my pyjamas in case I needed a quick getaway.

I nodded off but 45 minutes later woke to the chilling voice of a man that I will remember for the rest of my life.

He sounded like he was right next to me, loudly whispering “hey” in my ear. I was too scared to move and lay there for seconds until I heard the sound of a heavy wooden door creak.

I assumed it was the bathroom door, so I put on the light, got up and tried to recreate that sound — it didn’t murmur.

Enough was enough. I sprinted out of the room to find the paranormal investigators. Dan said: “You look like you’ve seen a ghost.”

I hadn’t seen one, but I’d heard one and that was enough for me.

The truth about Jane Fonda and Dolly Parton’s relationship

The Quarantine Stream: 'The Trip to Greece' Ends the Franchise on a High Note (But Maybe It Should Continue?)

Royal Family tree – Where does royal baby Archie sit in the line of succession and where does Prince Louis Mountbatten fit in?