A WOMAN broke lockdown rules to get lip fillers done at home but it left her with a horribly bruised face and extremely swollen lips.

Kelly Rogers, 40, from Cardiff, Wales, looked into getting lip fillers done by a company called Infinite Beauty Aesthetics Academy after being tempted by their incredibly cheap prices. 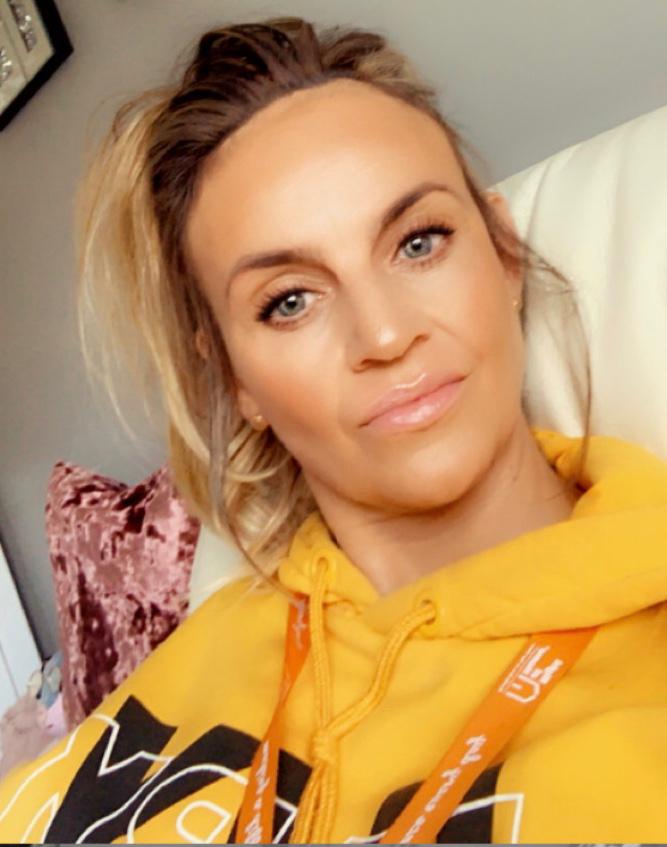 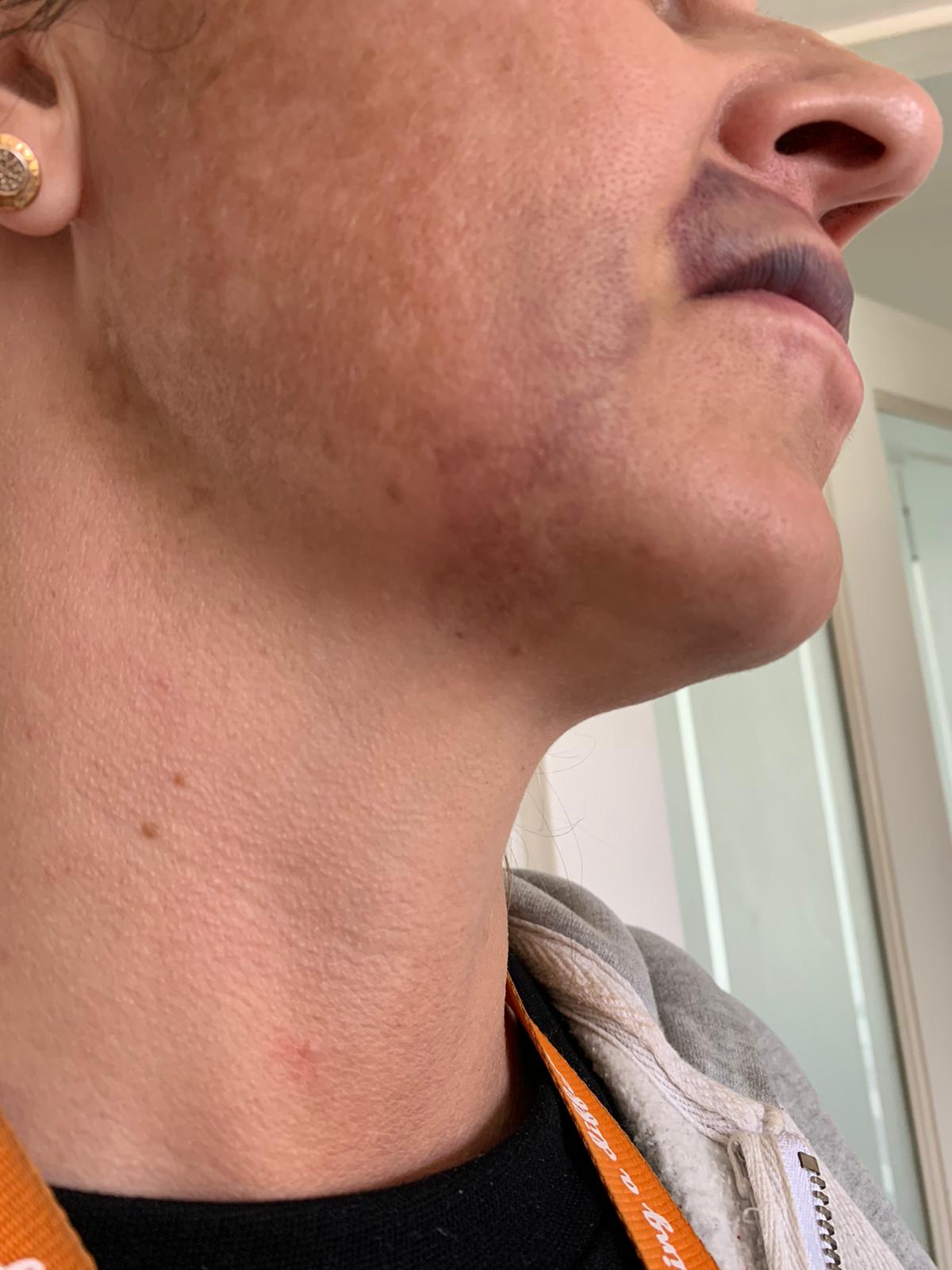 Rather than the £180 she would normally pay, the company were offering 1.1ml of filler for just £85.

But Kelly made the mistake of assuming the "academy" in the company name meant the staff would be well trained and admitted she "should have looked into it more."

She said: "It was so cheap and I saw the name and saw it was an academy so I just thought it would be fine as they train people.

"I am so embarrassed about it now, I should have looked into it more. I usually do." 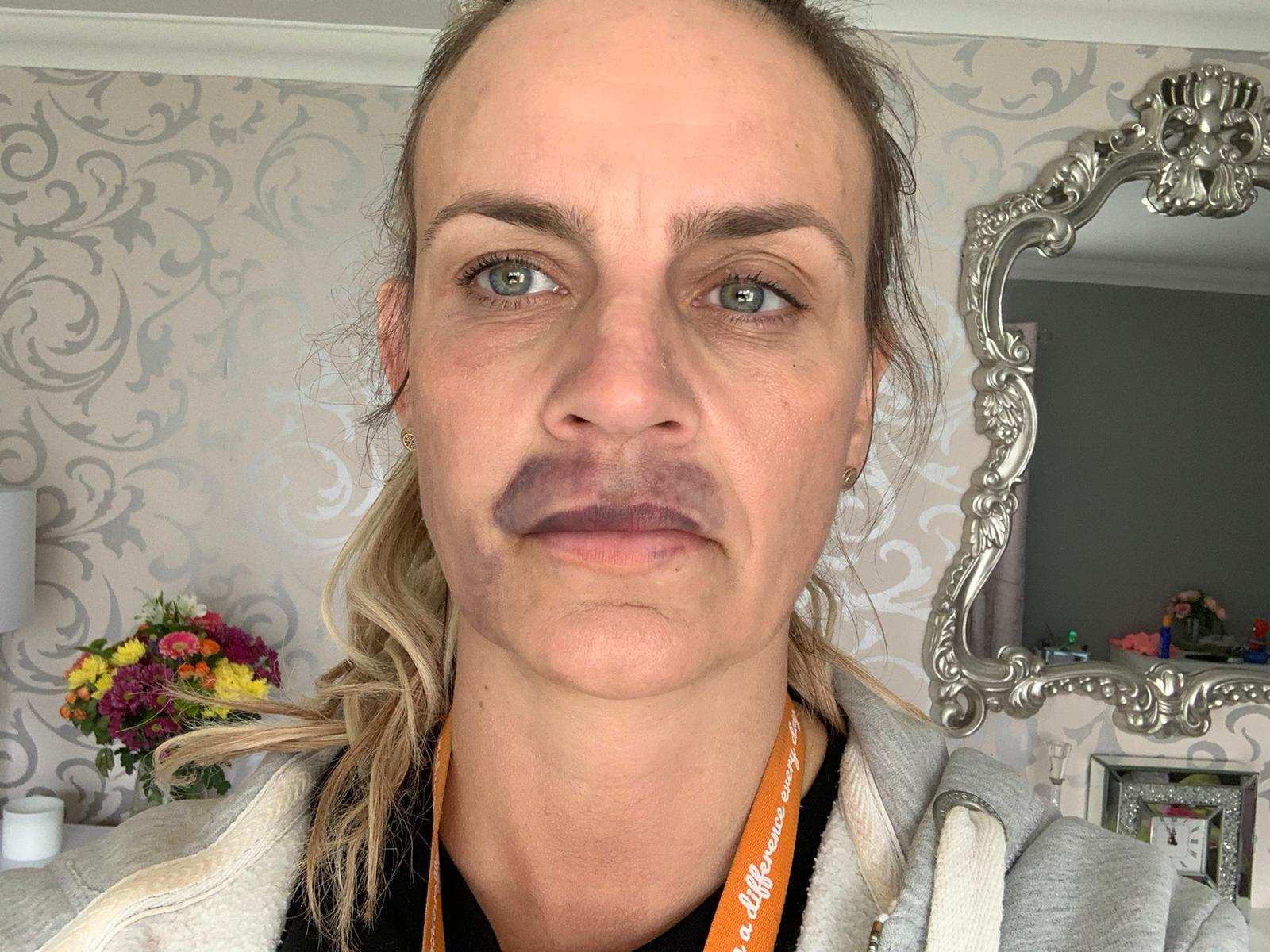 Messages from the company to Kelly described the aesthetician, Jessica Evans, as "fully qualified and insured" and stated she had completed extra Covid-19 training, as reported by WalesOnline.

But Kelly, who has had the procedure done four or five times before, suffered bruising to her upper lip, and from her cheek down to her jaw.

She claims that the procedure by the Cardiff-based company ruptured an artery, however in messages seen by WalesOnline, the company claims she had an allergic reaction.

The procedure took place on Saturday 4th July, despite lockdown rules still being in place throughout Wales.

Kelly, who has been a key worker throughout the pandamic, admitted working through the pandemic had left her failing to keep up to date with different lockdown announcements in Wales. 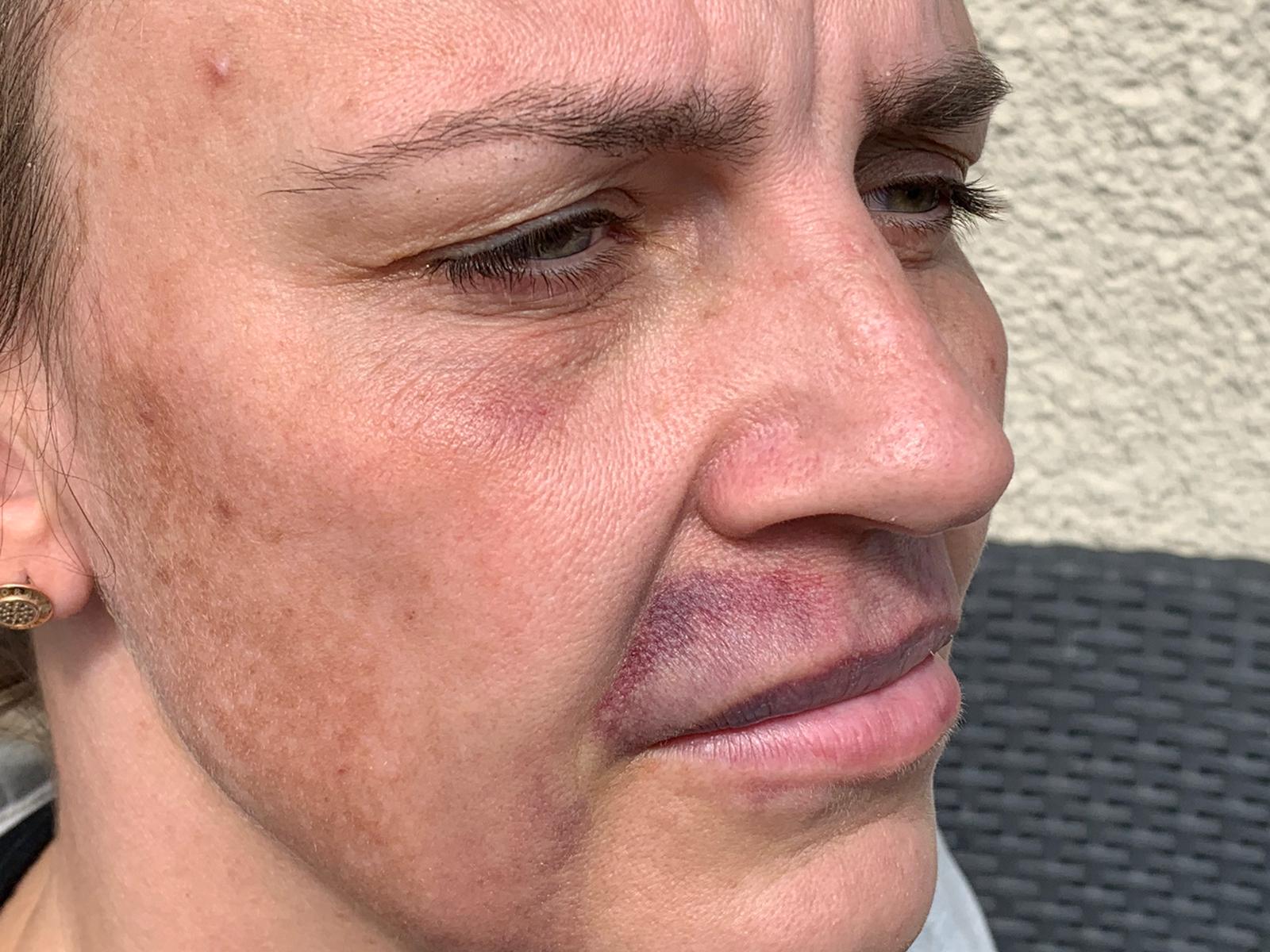 FABULOUS is ­working in ­conjunction with Save Face to demand that ­anyone ­considering a non-surgical ­cosmetic treatment should be well informed and able to make a safe ­decision.

She also said she was confused by announcements coming from England and was under the impression services were able to resume, as they had been since July 4 on the other side of the border.

Describing the incident, Kelly said: "The following morning I woke up and my face looked like I had been in a car accident.

"All the right side of my face looks like I have been drawn on by a sharpie," she added.

Kelly was told by the company that the bruising was a result of a dissolvent used, but she has since sought advice from a cosmetic nurse practitioner, Jane Laferla.

Ms Laferla, who is a board member on the Welsh Aesthetic and Cosmetic Society, said there were signs the filler had been injected into an artery by mistake.

She said the dissolvent Kelly was told that was used to remove the filler, hyaluronidase, should only be prescribed by doctors. 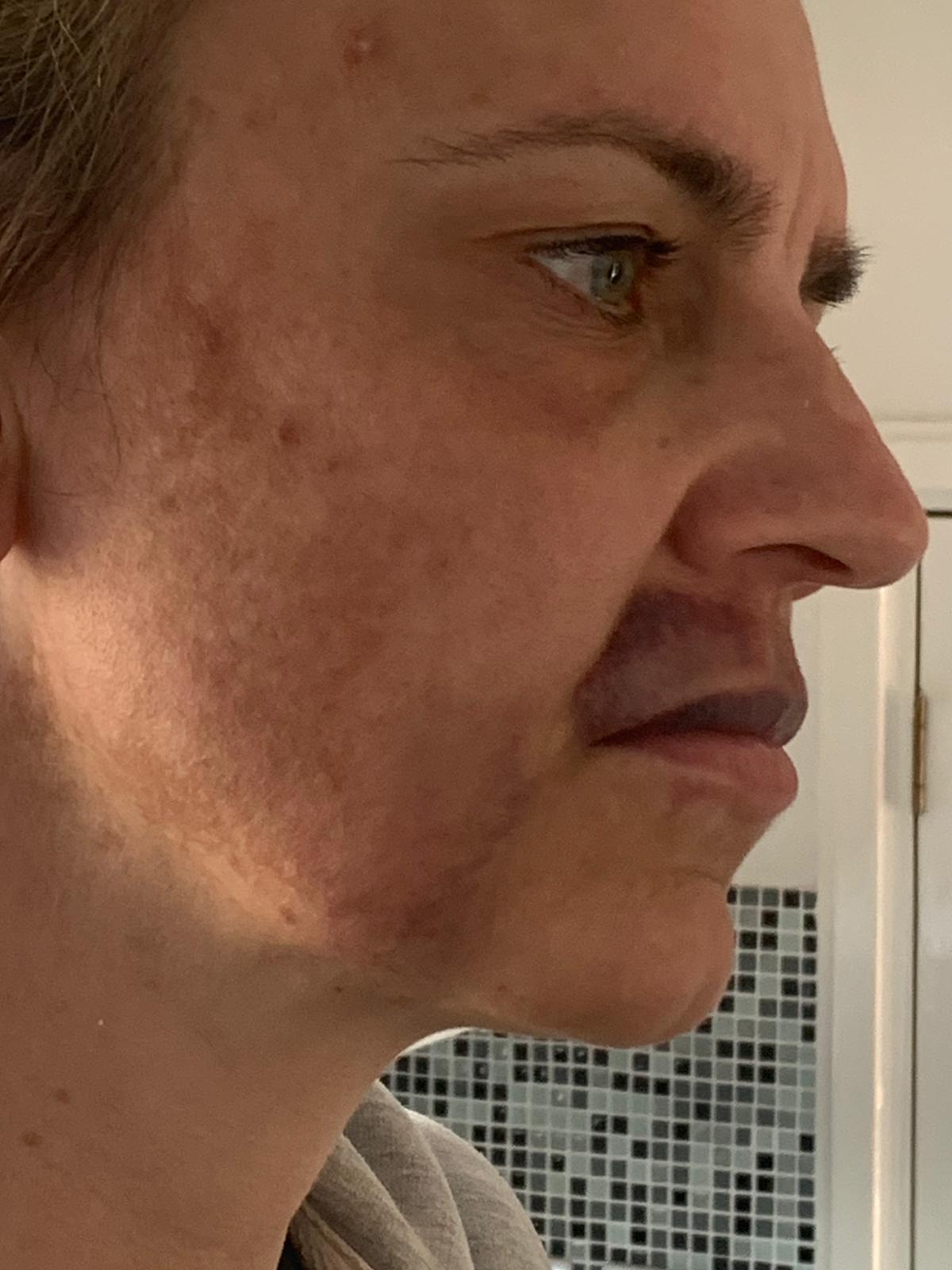 And added that the filler named in messages also seen by WalesOnline, Revolax Deep, is no longer licensed in the UK and would not be supplied by a pharmacy – It is however readily available online.

"We have been challenging the government on this for years and years about putting regulations in place," said the practitioner, who has 15 years experience in the industry and is registered with the Joint Council of Cosmetic Practitioners (JCCP).

"I am so fed up of mothers calling me crying that their daughter has had lip fillers and they have gone completely wrong."

The Cardiff-based expert added: "If you wanted to do a one day training course tomorrow you could set up by yourself and start injecting people from anywhere. Your kitchen, a caravan, a salon. There are no regulations in place to stop this from happening.

"They are not accountable to any regulatory body and the fact they have done this during lockdown shows that."

In response to the claims made by Kelly, Infinite Beauty Aesthetics has told WalesOnline: "That information is incorrect. We have contacted a solicitor and it is now a legal matter."

The Sun has also reached out to Infinite Beauty Aesthetics for comment.

Love real life stories? We're always on the look out for case studies to feature on Fabulous. Join our Facebook group and you could make money by telling your story.

In other real life news a mum was fired from her job during lockdown after her boss got sick of her kids during work calls as it ‘was not professional’.

We shared how a mum who shrank to a size 4 after obsessing over ‘thinspiration’ posts is happier now as a size 16 after GAINING weight.

Plus a single mum breaks down in tears after finding a kind note and envelope stuffed with cash hidden inside her second-hand car.

What time is Britain's Got Talent: The Champions on next Saturday, when is the final and who is taking part?

How close are we to World War 3 after the Iran airstrike? What will happen now?