Charliann Broadhurst, 28, was left even more astounded because the trio of tots were conceived during a ‘one night stand’ with her ex partner after they had split up. 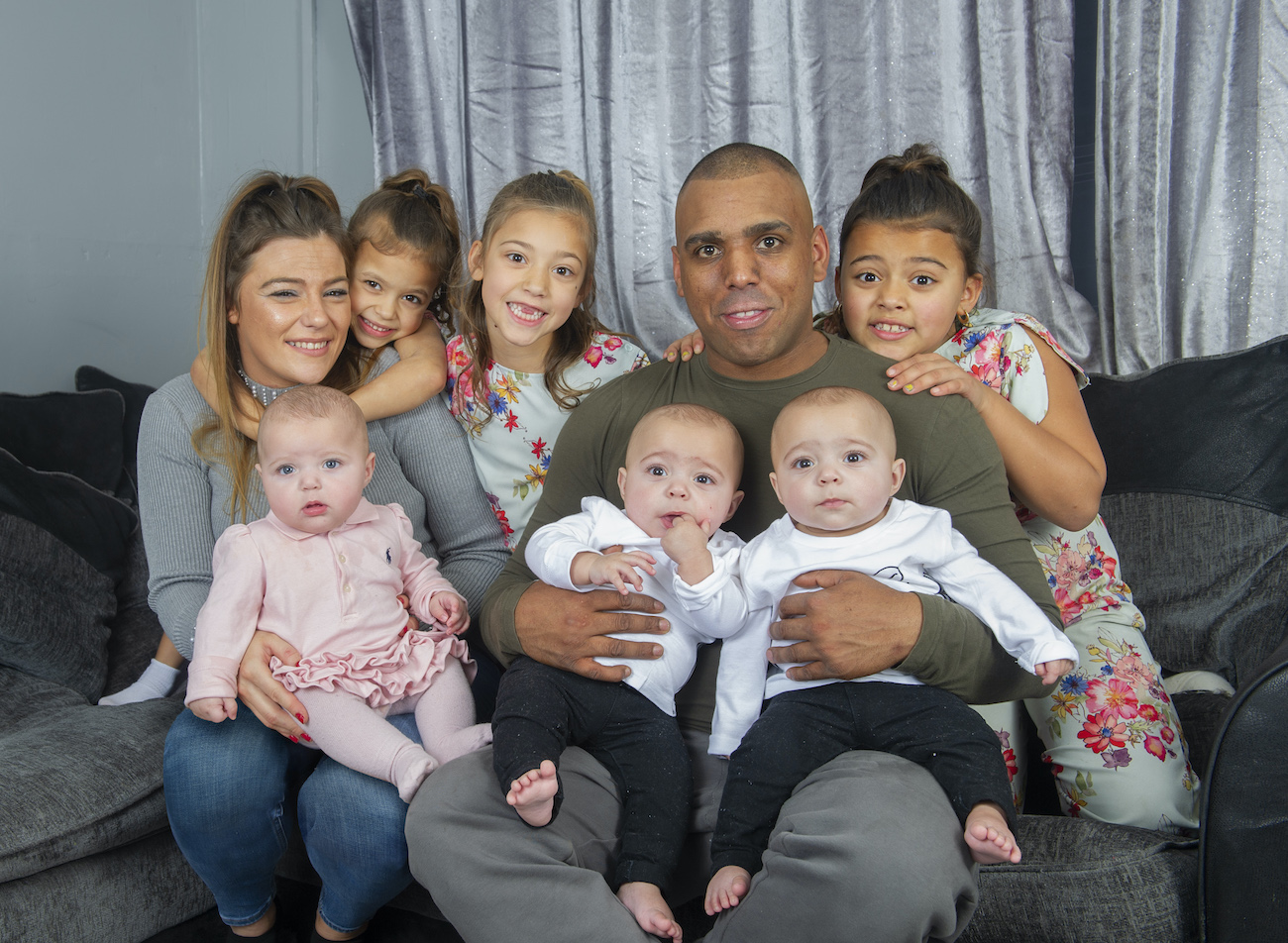 However, the big surprise turned out to be the best thing ever after the news brought her and childhood sweetheart Ryan Hill back together.

The mum-of-six – from Wellingborough in Northamptonshire -said: “No-one could believe it as at the time of conception me and Ryan weren’t actually together.

“He’s my childhood sweetheart and we’ve been together since we were 15 but at the time we were going through a really bad patch.

“I tell everyone I fell pregnant on a one night stand – it just happened to be with the man I already had kids with!” 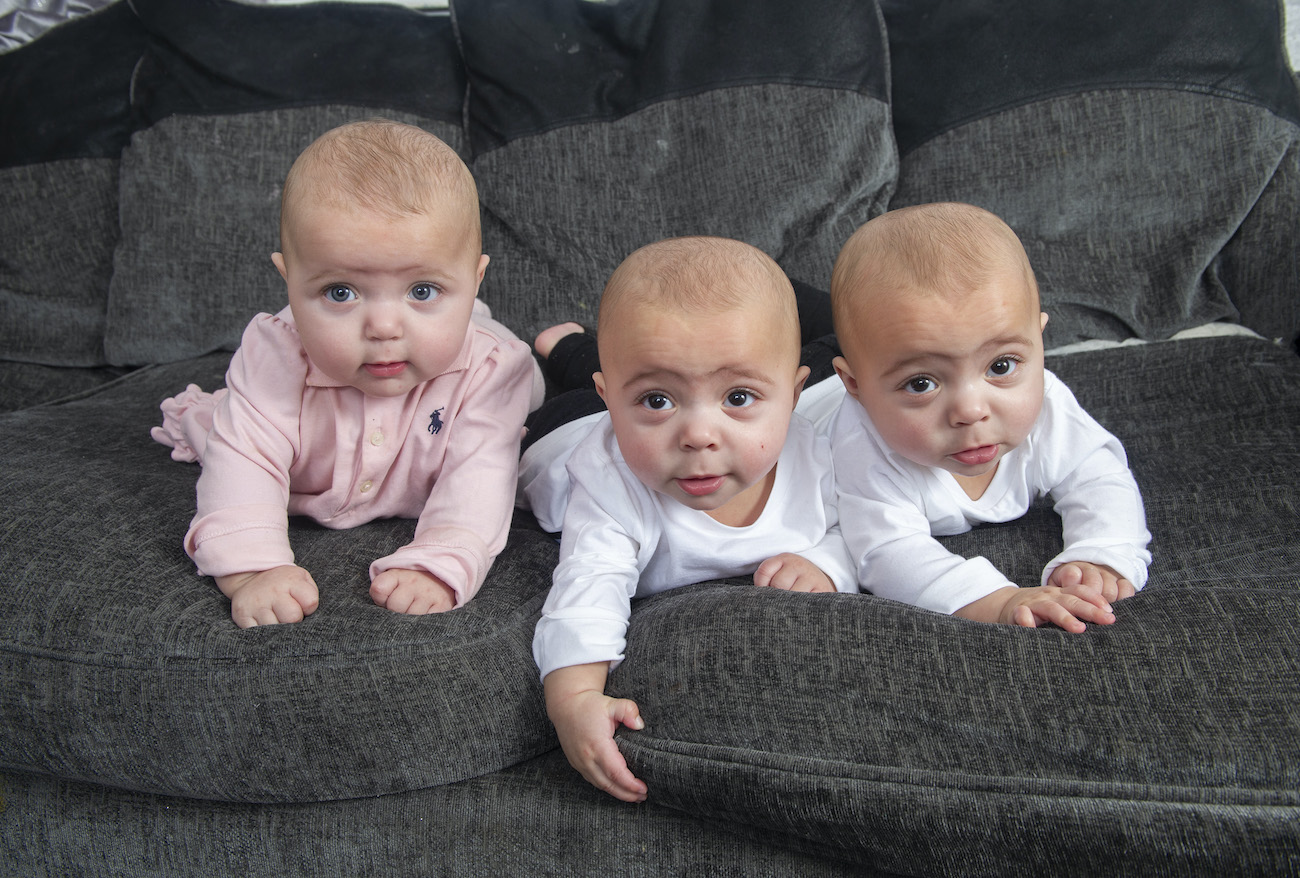 Charliann added: “It’s a miracle. It was like someone wanted to bring us back together.

“It literally is a fairytale.”

The couple had been dating since school and already had daughters Cassi-Lee, eight, Caira-Jae, seven, and Siena, five.

She was desperate for a son but made the tough decision to get sterilised after having her girls. 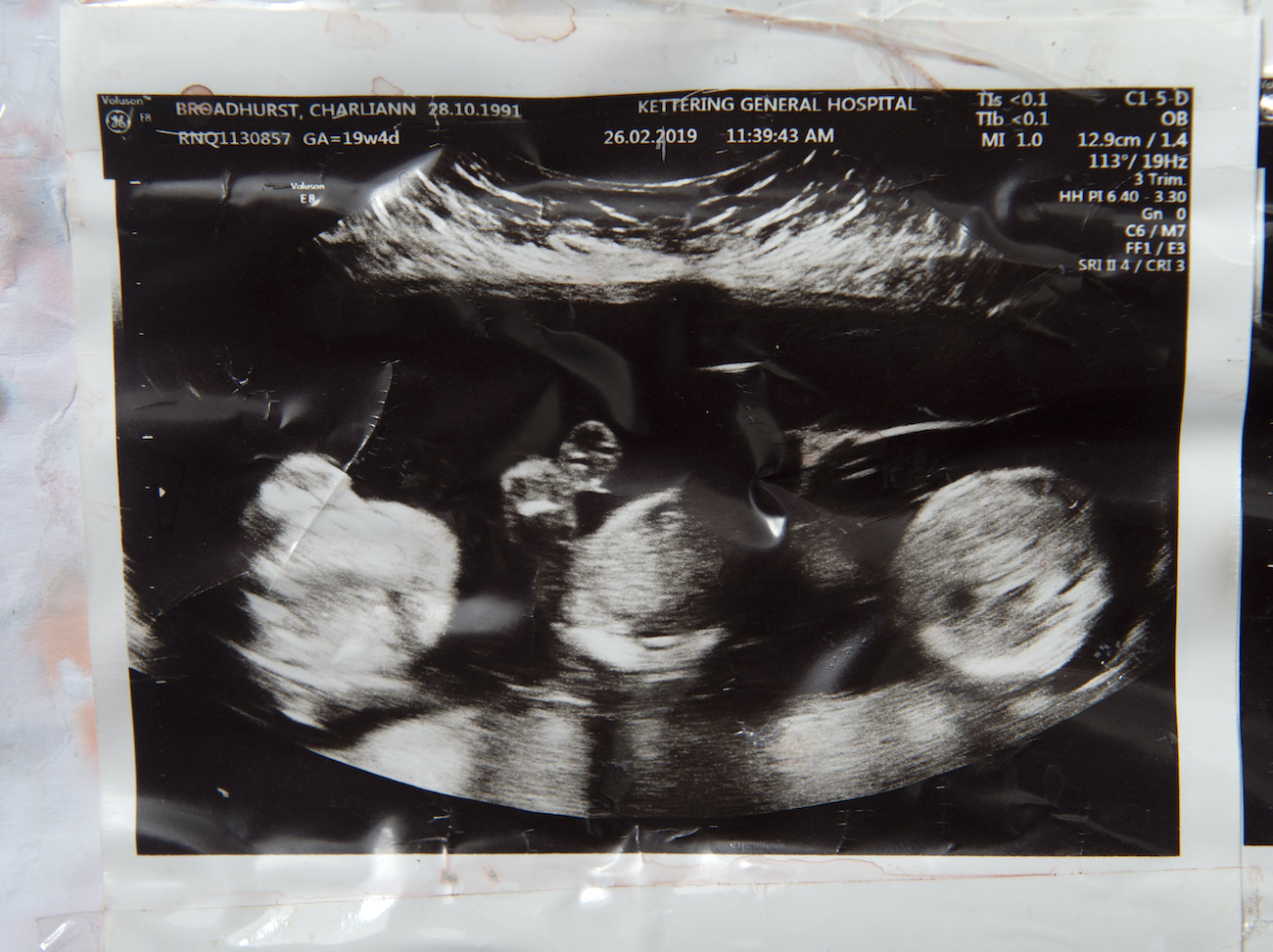 The couple went through a rough patch last year and decided to separate.

However, they still shared equal childcare and on one visit, one thing lead to another.

Charliann explained: “The triplets were not planned at all. 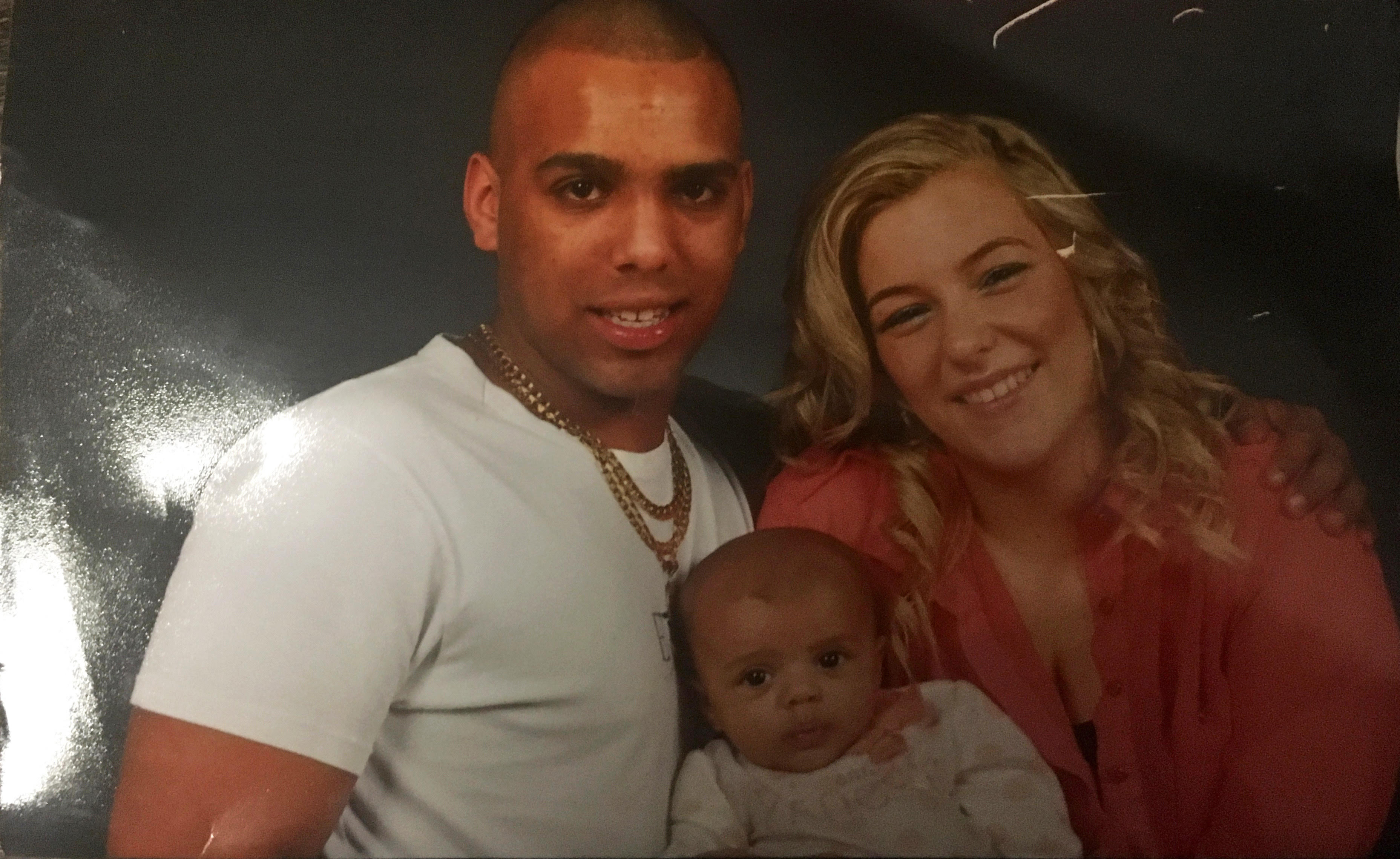 “Because I’d been bleeding he referred me straight to hospital.

“Within four hours I realised that I wasn’t just pregnant, I was pregnant with triplets. I could barely take it in.”

Charliann was sent to Kettering General Hospital where she was scanned and found to be about six weeks along.

Much to her amazement, the sonographer discovered fraternal twins, but that wasn’t all. 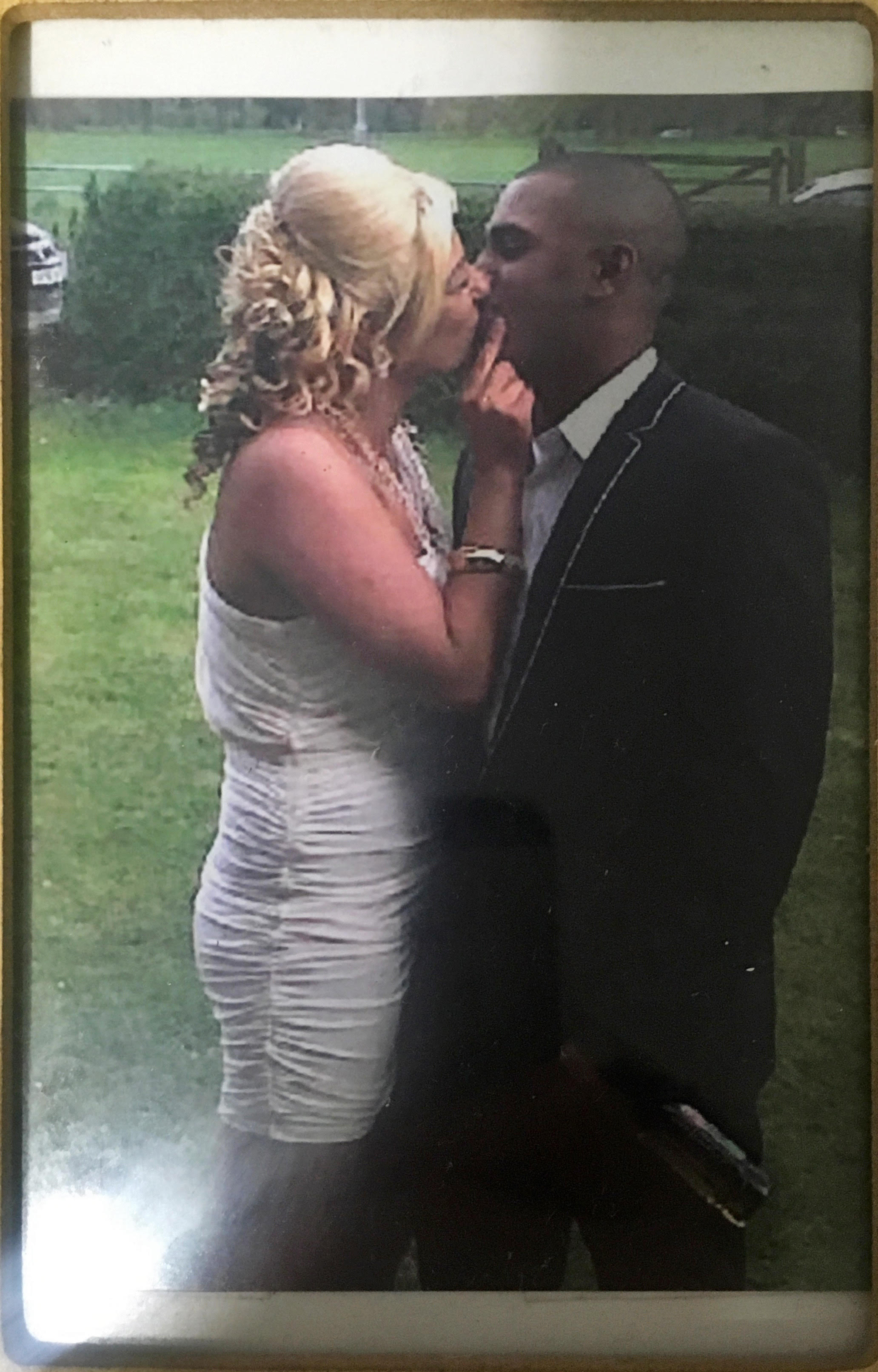 “She’d been scanning me for 15 minutes and then, right up in the corner, there was another dot,” Charlieann said.

“She said ‘I’ve really got to tell you something, there actually may be another egg.’

“I didn’t know how to take it. Twins are a fairytale of mine. I dreamed about having twins forever. “But triplets – wow.”

Charliann went home in a blur after being told she would need another scan in a week to check the babies’ heartbeats. 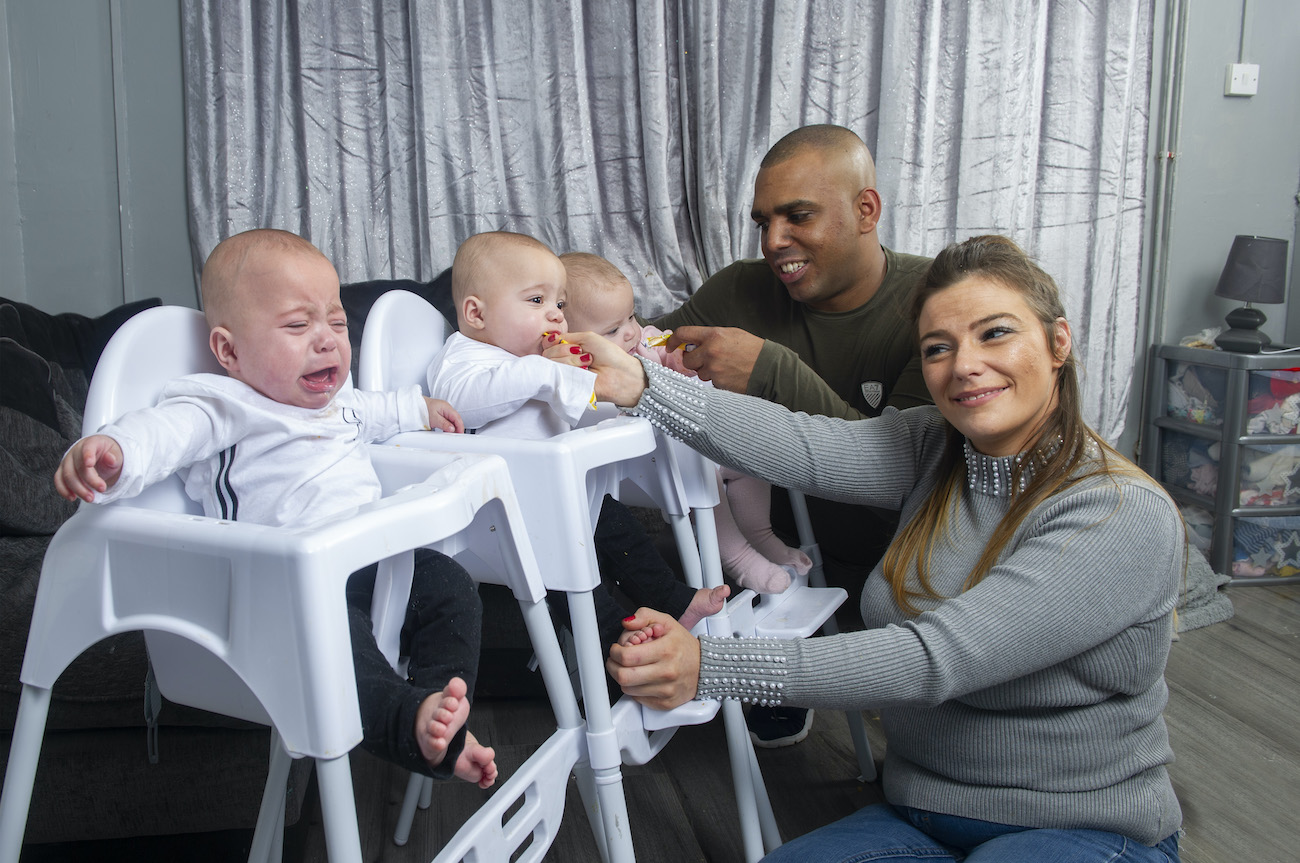 On her way she phoned Ryan – who “almost crashed his car when he heard.”

“We literally couldn’t speak to each other for 12 hours as we were taking it in.”

After doctors confirmed there were three heartbeats the following week, the couple tried to digest their bizarre luck.

And at 12 weeks, they gathered their children and told them they were going to be big sisters to not one, not two, but three babies.

But the pregnancy took its toll. Charliann started off as a size 16, but her weight plummeted and size eight clothes became baggy as the triplets sucked all the nutrients out of her.

“The pregnancy itself was horrific,” Charliann said.

“I can’t say I enjoyed a single part of it. It was scary.

“I was being scanned every week, going for tests every week. I felt like crap. I couldn’t motivate myself. It was the mindgames. I thought they were going to die all the time.”

At 20 weeks, the couple found out they were having two boys and a girl.

Charliann said: “I didn’t have a clue about the sex of the babies. I honestly thought they’d all be girls and it would be more punishment!

“When they told me two were boys it was a dream come true. I cried when I found out. I was the happiest person alive.

She was then scanned weekly at Kettering while every month a multiples expert from Leicester Royal Infirmary was sent down to check the pregnancy was developing.

We literally couldn’t speak to each other for 12 hours as we were taking it in.

The babies were at risk of deadly Twin To Twin Transfusion Syndrome (TTTS), a rare condition that can occur when babies share a placenta that means one can stop growing.

Although Charliann had some symptoms of the condition following the gender scan at 20 weeks, the trio were not affected and the pregnancy continued perfectly normally until 29 weeks.

She then began contracting but knew she had to do everything she could to avoid going into early labour to give the tots the best chance.

After a fortnight in hospital, Charliann was let out – but her next scan revealed devastating news.

“I hadn’t been scanned for two weeks and I felt something was wrong,” she said.

“I was being scanned and within seconds the sonographer said ‘I need to get you an emergency caesarian now – your babies have stopped growing.”

The mum went straight in for surgery at Nottingham City Hospital at 33 weeks – and Ryan almost missed the delivery.

“I actually thought Ryan was going to miss it,” she admitted.

“There are two hospitals in Nottingham and he was in a rush to get there and went to the wrong one.

“I’d had my epidural and was lying on the table crying ‘Where is Ryan?’ He was on loudspeaker in the theatre and all the surgeons were directing him to the hospital.

An incredible picture shows all three still connected by their umbilical cords and lying on Charliann’s tummy in the operating theatre.

There are two hospitals in Nottingham and he was in a rush to get there and went to the wrong one.

Little girl Ryana was born first at 4lb 4oz, then Carter, who weighed 3lbs 7oz and last was Cayon at 3lbs 8oz. All were born within the same minute.

Heartbreakingly all three had an infection and needed antibiotics. They were taken to NICU and Cayon was transferred to Kettering Hospital – spending 24 hours there alone before the other babies and then Charliann joined him a week later.

She then spent an additional week in Kettering before being discharged.

Charliann now spends eight hours a day breastfeeding and has to buy everything in threes – the tots have three cots, three high chairs and each outfit has to be bought three times.

She breastfed up to her original due date – July 14 – then admitted it was too overwhelming to continue.

She now gets up at 4am to put on two loads of washing and make her kids’ six breakfasts.

She says mealtimes and bath times are a “military operation.”

She said: “That time between the elder kids coming home from school and bathtime is a military routine.

“And when I say military routine I mean a conveyor belt. It’s like ‘Change nappy 1-2-3’.

“It’s so hectic. I wouldn’t even invite someone in for a cuppa at that time.

“I like to keep things clean too and that’s another thing that stresses me out….my life is cleaning, cooking, washing, doing errands, having to get their stuff for school.”

That time between the elder kids coming home from school and bathtime is a military routine.

But she added: “The elder children have been lovely. They are my little helpers. I could not have done it without them. Their dad is good, I can’t fault him, but my girls are amazing too.

“They have become little mummies overnight. They keep the triplets occupied, they run around the front room and all the triplets are just watching them. They love it.”

Now Charliann says she just needs to get the next year or two out of the way before she looks into doing some volunteering – and says she might even marry Ryan now they have six kids.

“But I think I’ll be too busy for a while,” she joked.

In other parenting news, we told you how Sue Radford gave fans a glimpse inside her chaotic home as she showed off new baby's pram.

We also revealed that a mum has issued a Cadbury's Mini Egg warning after her daughter choked to death.

And women reveal the agony of becoming a mum when you've lost your own mother.

“You Want To Be Politically Correct”: Donald Trump Mocks Reporter For Leaving On His Mask During Press Availability